Risotto: Getting it right..... 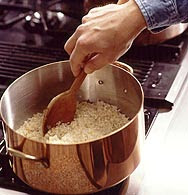 The Rice: There was a period when recipe books in the UK would blithely specify either Arborio or Vialone as the rice of choice for making risotto - and I've never been able to understand why. Amongst the varieties readily available, by far the best choice for risotto is Carnaroli - it has a much higher starch content, and the texture of the finished product is infinitely superior to the result you get from using either of the others. Carnaroli costs more than the others, but we're not talking a king's ransom here, and the difference in the result is worth the extra pennies. Of course, absolutely the best rice to use is none of the above, but Japanese rice, which is of a quality vastly superior - you can tell just by looking at the grains, where there is no unevenness in colour, and none of the gritty-looking speckles you normally see in other rice. The starch content in Japanese rice is very high, giving a wonderfully 'gluey' quality to risotto, and for some reason - I've never bothered to fathom why - it cooks more quickly than other rice, taking around twenty minutes for a risotto rather than the more usual half-an-hour. In years gone by, I travelled regularly to Tokyo on business, and habitually loaded myself with a five kilo bag of rice which I got from the department store next to Shibuya station - but rather closer to home, you can get much the same thing in the supermarket at Oriental City in Colindale (if doing that, make sure you get the real Japanese Rice, and not the stuff grown in California, which isn't the same thing at all!)

The Sofritto: Most recipes specify onion for the sofritto, and I would generally agree - sometimes adding in other things as well, as appropriate, for example finely diced celery if making a Celery Risotto, or sauteing zucchini slices at the sofritto stage if that's your flavour of choice. When making a seafood risotto of any kind, I replace onion with finely chopped leek instead - works particularly well with e.g. Squid Ink Risotto.

The Liquid: Invariably, just after the rice has had its tostato, I start with a hefty slug of dry white vermouth, before beginning with the other liquids or stock. In a risotto ai funghi porcini I would then add the mushroom soaking liquid (appropriately filtered), and then get on with using stock. If adding a more gently flavoured liquid - such as lemon juice in a Lemon & Sage Risotto - then I tend to add that closer to the end of the cooking process.
Interestingly, I tried a recipe recently from Artusi for something he called 'Rice & Peas', which was a risotto in all but name, where he used water throughout rather than stock. The result was delicious, making me realise that the base flavour in risotto almost entirely comes from the sofritto, and that worrying about the quality of the stock is probably rather over-done!

The Mantecare Stage: This is the point where you add whatever things you intend to use to give the risotto a kick, in terms either of unctuousness (cream, or butter) or flavour (grated parmesan, or e.g. white truffle oil, or chopped herbs or celery or fennel tops). There are supposedly some rules about what you can and can't add depending upon the main flavour of the risotto - never adding cheese to a seafood risotto, for example - but hey, it's your risotto, so I think the choice comes down entirely to personal preference.

Technique: Couldn't be simpler. Cook the sofritto until it collapses; add rice (a third of a cup per person - it seems a small amount, but you'll find that in practice it is perfect), and stir it for half a minute to absorb the sofritto and slightly 'toast'. Add vermouth, and let the rice absorb it, then proceed with the remaining hot stock. Adjust the heat so the liquid in with the rice is just barely bubbling - you aren't trying to cook the rice in the liquid, but encouraging a process of fusion, whereby the liquid is gently absorbed into the rice. Let the liquid almost disappear each time, before adding more. When the rice is done, turn off the heat, add your mantecare elements, check seasoning, and stir.
Signora Agnelli has a method for par-cooking risotto in advance, which works very well if you have guests, and don't want to be chained to the stove instead of entertaining them: cook the risotto for about twenty minutes, leaving it definitely underdone. Turn off the heat and cover the pan. The risotto carries on cooking in its own heat, and when the time comes to finish it, add a ladleful of hot stock, and stir into the risotto as you heat it through gently. Best not done much in advance, but this method works well if you time your twenty minute par-cooking to finish just as the guests are arriving. Personally, I prefer to drag a guest or two into the kitchen - along with a decent glass of whatever we all happen to be drinking - in order to combine conversation with stirring!

Cod and Basil, wrapped in Parma Ham, seared and then baked. Served with skinned capsicums, gently braised with garlic and rosemary, and a dressing of balsamic.

Marsala flavoured Posset (baked cream) over prunes poached in red wine and cinammon. For recipe, see below.
Posted by Pomiane at 10:21