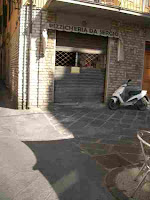 ...is a ghost town! Sergio is taking his annual break - leaving his shop door wide-open behind the grille while he's away, to air the place out - as is Claudia ( so pasta is off the menu for the foreseeable future) , and the fruit and vegetable market is practically deserted. To the extent that you almost expect to see tumble-weed blowing gently around the place, amongst the ghostly remnants of the deserted stalls. Antonella has disappeared - presumably off to Ischia, as usual - as has the stallholder next to her, and the one next to that. This morning, the usual bustle around the cut-price clothes stalls in Vettovaglie was missing, and I wondered why th 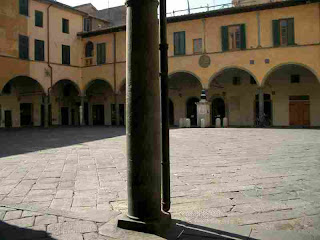 e one stall that remained in place had even bothered. Everybody has gone! (The cheap clothes stalls, by the way, are one of the reasons that we ended up choosing Pisa. In other towns, the oldest and most venerable square in town would have been long given over to businesses selling scented candles and novelty soaps and other 'artisanal' products aimed at the discerning tourist. Pisa, in its infinite wisdom, has instead surrendered its most vene 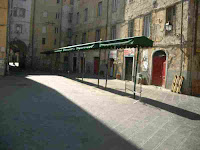 rable square to purveyors of cut-price knickers! It speaks volumes.......)

Of course, this annual exodus means that menu planning and provisioning at this time of year become a little like drawing up and executing a military strategy. Sergio is back on Wednesday, so that's ok, but then Maurizio disappears for his break on the eleventh, and the fish shop will be closed after the seventeenth, right through until next month! And then, to cap it all, the fifteenth of this month is Ferragosto, at which point anybody who's still around closes for the day anyway........celebrating the birth of the virgin, I believe. It won't be tumble-weed blowing around the deserted streets on that day, but groups of tourists, wandering bemused at the fact that not even a cafe 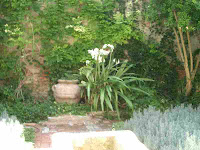 is open to take their custom on a day at the height of the holiday season!

However.......the weather is blissful - apart from the dramatic thunderstorm yesterday morning, when the heavens ripped open and it rained chair-legs (as the Greeks would say); but even that was rather splendid in its intensity - and the sense that every day is Sunday has its definite good points. The garden is flourishing, and ripe with huge agapanthus globes and the

scent from the many-blossomed Crinum Vanillorum. I expect we'll somehow survive the challenge of the next couple of weeks............we normally do...

I always find Pernod an agreeable surprise in cooking. Somehow, it isn't a flavour that I expect, and when it inserts itself, it manages to add a whole different dimension to whatever dish it's in. A simple mixed leaf salad with a dressing of Oil, Raspberry Vinegar and Pernod is quite stunning, for example. In the recipe given here, the aniseed flavour from the Pernod manages both to challenge and complement the creamy unctuousness of the Scallops and the Leeks.

1. Slice the Leeks thinly and saute in 2 tablespoons of Butter over medium heat for one minute. Add Salt & Pepper to taste. Add the Vermouth and cook, stirring, for one minute, and then the Cream. Cook for a further five minutes, stirring occasionally.

2. Meanwhile, in a separate pan, saute the Shallots for a minute in 2 tablespoons of Butter. Add seasoning, and then add the Scallops to the pan. Cook for another minute, then add the Pernod and stir.

3. Combine the contents of the two pans, and mix together, along with the remaining 2 tablespoons of Butter.