Creamy, rich on the tongue, and completely delicious! Recently, I came across a copy of Gaston Le Notre's book on ice creams and sorbets - the companion volume to his magnificent and practically exhaustive work on pastry, which I can't recommend too highly for its technical precision. I see from the small print that there was a five year gap between the two books, however, and I suspect the delay was because Le Notre felt slightly embarrassed about presenting a whole collection of recipes the vast bulk of which merely follow the same simple formula: liquidize and sieve the fruit, and then freeze it in an ice cream machine along with sugar syrup to the ratio of 2:1 (twice as much fruit puree as sugar syrup). The syrup itself is made by combining a kilo of sugar with a litre of water, bringing it to the boil, whilst stirring, and then leaving to cool before use (or, half a kilo sugar to half a litre of water...the proportions work, whatever amount of syrup you want to make).
It's as simple as that. And if, as I now do, you keep a quantity of syrup in the fridge ready for use, then the whole process of making a new batch of sorbet whenever you want is remarkably quick and straightforward.

Ingredients: Blackberries (about two cups - enough to give you 300 ml of purée, once the fruit has been liquidised and sieved); 150 ml of sugar syrup; a slug of Crème de Cassis (optional, but I think it makes a difference).

1. Liquidise the fruit, then push it through a fine sieve. Add to the purée exactly half as much again sugar syrup (i.e, if you have 300 ml of purée, then add to it 150 ml of syrup; if you have more or less fruit purée than this, then adjust the syrup quantity accordingly).

2. Add to the mixture a generous tablespoon of Cassis. Freeze in an ice cream machine until firm, then leave in the freezer for an hour or so. When you take it out of the freezer, if it is too hard to serve immediately, let it sit in the fridge for twenty minutes or so until it has softened sufficiently to scoop easily.
Posted by Pomiane at 11:50 2 comments:

...that we'd be entirely au fait with the plethora of public holidays which are scattered throughout the Italian year. On so many occasions, entirely without warning, have I been surprised by midweek empty streets and shuttered shops (either in honour of the obscure miracles of Saint Euphemia, or else the commemoration of a military or political event from several generations, or even several centuries ago) that I thought I had them all committed to memory. But, no...

Yesterday was Ferragosto. Since it was Sunday, it turns out that today is the holiday instead - although I thought they didn't do substitution in these things (or maybe they do, if it isn't 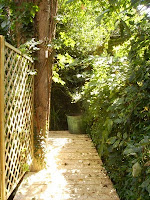 an overtly religious holiday? Although, again, I've never been clear whether or not Ferragosto is religious - in Greece, it's celebrated as the birthday of The Virgin; and if this isn't supposed to be connected with that, then I don't really understand where it comes from.) In any event, I wasn't alone in being surprised, as I spied a smattering of white-haired Nonnas hovering uncertainly round the door to the Post Office, this morning, when I took the four-footeds down to the piazza for their constitutional. The door stayed resolutely closed, as we did a leisurely circuit of the otherwise deserted lawns. If the Nonnas can get it wrong, too, then I suppose I needn't feel too much of an innocent abroad. 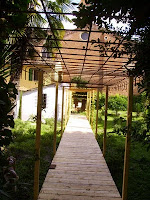 n odd month here. Particularly this year, because of 'the crisis'. Businesses that would normally shut for weeks on-end seem to be taking it one day at a time, depending on the weather and on the possibility of any customers. Gian Carlo is working (sort of) but most of his suppliers are either closed or only open at odd hours; the Brazilians are working (sort of...but then, that could be said of them at any time of year); Signor Faschi, who said he would be in to polish the ex-loggia floors in Via Fucini 'after the holiday' could be turning up any day now, or perhaps not until the end of the month; our lawnmower dealer is now closed for two weeks, but it wouldn't make any difference if he were open anyway, as the machine importer he needs to speak to won't be open again now until September (our machine has died, well within 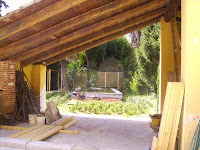 its warranty period...but, fortunately, the Brancolis have been able to loan us one of their surplus ones).

The new rose pergola is finished, as is the entrance walkway. Half of the coping stones have been positioned around the edge of the lily pond, visible across its bed of newly-planted escallonia. It all looks a bit 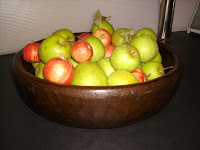 raw at the moment, but should look weathered and overgrown quite quickly. The interior of the barn is still a building site...despite the fact that we need it for a large lunch party next week. Which will be fun, in amongst the cement mixer, heaps of old plaster and discarded hard hats!

Tortelloni of Ragu, with a Tomato-Cream Sauce and Chives.

Sole in Parmesan and Marsala, with braised Celery.