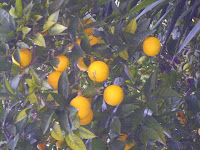 The citrus trees are all coming into fruit right now, and although we don't number a Mandarin in our own agrumi garden, hanging over the wall across the lane just across from the front gates at Santa Caterina is a Mandarin tree of venerable proportions which is currently dripping with fruit. And since the owners of the tree don't have access to the lane, and we seem to be the only people going along it right now.....well....it would be a shame to let all that fruit go to waste...

I like the look of bowls piled high with Mandarins - but the truth is, in this household, they tend not to get eaten. Hence this particular dish (which, in fact, could be used for pretty much any citrus fruit, I think, as long as you respect the proportions of fruit to sugar, water and egg white). I don't really know why, but this particular recipe produces a sorbet of unequalled creaminess, which doesn't become granular even after some time in the freezer. I made a batch of the stuff about two weeks ago, the last remnants of which we finished for dessert last night - and it was as smooth and creamy yesterday as when first made. You just have to remember when serving sorbet which has got rock hard in the freezer to let it sit for about an hour in the fridge beforehand.

1. Combine the Sugar and Water in a pan, and add the grated rind from four of the Mandarins. Bring to a boil, stirring all the time, and then reduce the heat to simmer for five minutes, stirring frequently to ensure the Sugar is completely dissolved. Allow to cool completely.

2. Add the squeezed juice from all eight Mandarins to the cooled sugar syrup, then sieve it to remove the grated rind.

3. Lightly beat the Egg White until frothy (but not yet stiff) and add this to the sugar syrup as you put the mixture into the ice cream machine. Process until it has reached the desired consistency. 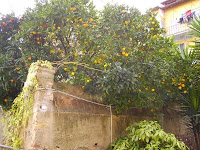 A splendid combination of flavours, this dish is eminently practical for a dinner party, as it can be made almost entirely as much as an hour in advance, and the bird kept warm until the sauce is prepared, just before serving. The recipe is loosely adapted from one by Anna Del Conte, to whom I find I'm returning for ideas ever more frequently these days.

2. Reach into the bird, and with your fingers separate as much of the skin from the flesh of the thighs and breasts. Into these cavities distribute the diced Butter. Rub the Salt all over the bird, and then package it loosely inside a buttered sheet of aluminium foil.

3. Place the wrapped bird in a roasting pan, and roast for an hour in the pre-heated oven. Once done, open the package carefully - you want to keep all of the cooking juices which have gathered inside the foil - and allow the bird to cool sufficiently to be able to remove the breasts and legs. (Retain the carcase and use it to make stock for use in other recipes). Collect in a bowl all of the cooking juices and the juices which have been released in the course of cutting up the bird.

5. Just before serving, add all of the retained cooking juices to the frying pan, and heat briskly, stirring vigorously, until the mixture bubbles and has slightly thickened. Serve the pieces of Guinea Fowl on heated plates, and add to each serving a spoonful of sauce.
Posted by Pomiane at 10:36 No comments: 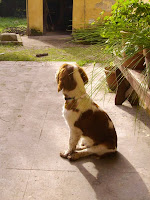 ...that we're cruising towards the end of the year. Despite the recent appearance of Christmas lights the length of Borgo Stretto, and across into Corso Italia on the other side of the river, the fact that December starts in only a couple of days doesn't really compute. Not when the days follow sunnily one after another, and it's still shirtsleeve weather in the garden...even warm enough to sit and drink tea on the terrace at the end of yet another day of hard-garden-labour, a couple of days ago, and trying not to dwell on h0w much more yet remains to be done before the garden will have started to take shape. (In truth, there are days of distinctly un-balmy 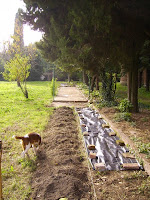 weather...like the autumn storm, last weekend, which blew in part of the east window in the church at Santa Caterina...but for the most part, one mild and sunny day follows another.)

In the garden, new beds have had to be dug to accommodate the influx of plants, and the all-too familiar sight of strips of weed-cloth indicates the future location of paths and pergolas. The dogs love it; freshly-turned earth is their idea of heaven - both snuffling at it, and rolling around in it - and their challenge is clearly to shift as much of the stuff as they can from the garden to the inside of the house by the shortest route they can manage. My ambition is to have as little of the stuff accessible to them as possible (by dint of planting in it, compr 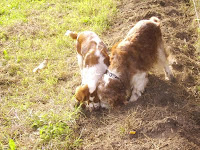 ehensively) and thus to cut off their supply!

At the moment, we're awaiting Signor Tempestini's quote for supplying trees for the new orchard, and plants for two (maybe three?) new shrubberies...and assuming there are no horrendous surprises in the price, then planting might get underway before Christmas. In the meantime, I've planted 500 crocus bulbs under the Douglas Firs and around the base of the Lemon trees ('Joan of Arc' - one of the larger and pure white crocus varieties, which look spectacular towards the end of February) and 100 double flowering narcissus, under the Nespola trees, and along the side of the raised causeway that runs through the centre of the garden. By the time they flower, my blisters from the bulb planter might perhaps have disappeared...

Poached Chicken Breasts, with a Tarragon cream sauce; Celery, braised with Pancetta in a broth of Guinea Fowl and Duck.

Layered Meringue Cake (from Harry's Bar - layers of Pan di Spagna and Creme Patissiere, baked inside a coating of Italian Meringue)
Posted by Pomiane at 16:34 No comments: