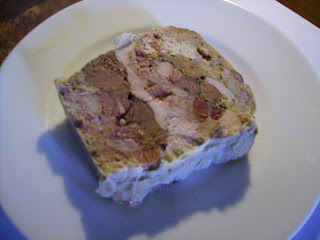 Closely based on something from Simone Beck's collection of recipes published in 1972, this is an excellent terrine - up there with the best, and certainly as good as the rabbit and lemon terrine that has for me long been the acme of this kind of dish. Not particularly complicated to construct, once the  list of ingredients has been assembled, it is vital that it remain untouched for at least a week - and preferably ten days - after having been cooked; as the terrine matures, the flavours just get better and better.
It's an advantage also if you have a mincer to process the ingredients that go to make the 'binding' element in the terrine, rather than resort to a food processor; the latter isn't impossible, but I suspect that, with a food processor,  you risk reducing the mixture to a purée, which will compromise the quality of the finished product in terms of both texture and flavour.
Serves 10.
Ingredients: 4 Chicken Breasts; approx 15 slices of rindless unsmoked Bacon (for lining the terrine; in Italy, I use slices of lardo, which aren't generally available elsewhere);250g diced Pancetta; 250g cooked Ham; 250g Chicken Livers; 2 tbs Butter; 0.5 tsp dried Thyme; Salt & Pepper; 0.5 cup Cognac; 1 large Egg; generous pinch of Nutmeg; 0.25 tsp ground Coriander; 2 tbs mixed finely-chopped Tarragon, Oregano, Parsley; medium Bay Leaf, dried and ground to powder; 250g Prosciutto (preferably in one piece, so that it can be cut into thick strips, but if you can only get pre-sliced, this will work as well).
Method:
1. Line the terrine mould with the slices of Bacon, leaving the ends hanging over the sides, so that once the mould is full they can be laid across the top.
2. Cut two of the Chicken Breasts into slices and then into half centimetre strips.
3. Put through the mincer the remaining Breasts, along with the Pancetta and Ham; mix together thoroughly in a large bowl.
4. Cut each of the Chicken Livers into four pieces and sauté in melted Butter for three or four minutes, until coloured, then add dried Thyme and season with Salt & Pepper, pour in half of the Cognac, and flame. Once the flames have died down, remove the Livers with a slotted spoon, and add the cooking juices to the minced mixture, along with the Egg and the remaining Cognac. Stir thoroughly, and mix in the nutmeg and herbs; add Salt and Pepper as appropriate.
5. Cut the Prosciutto into strips.
6. Assemble the terrine:  into the lined terrine mould put a third of the chicken mixture, levelled to fill the mould evenly; cover with a layer of strips of Chicken Breast (half of the total amount), then a layer of trsips of Ham (half of the total amount), then a  layer of Chicken Livers (half of the total amount). Repeat the process with half of the remaining chicken mixture, topped with layers of the remaining Chicken Breast, Ham, and Chicken Livers, and finally a layer of the remaining chicken mixture. Fold the strips of Bacon over the top of the filling, and cover the whole thing with a layer of aluminium foil, and then the lid of the terrine mould.
7. Place the mould in a bain marie, and cook a 180 degree C oven for two hours.
8. Remove from the oven, and allow to cool for an hour or so, then remove the lid from the terrine, and place a weighted board on top of the foil covering; remove the water from the bain marie, but leave the mould standing in the roasting pan while being weighted, as liquid can leach out at this stage. After 12 hours, put the entire thing in the fridge, and only remove the weight after 48 hours.
9. Serve only after a week has elapsed - this terrine doesn't unmould well, and so is best sliced directly from the mould. Serve with slices of cornichons, and a green salad.
Posted by Pomiane at 10:19 No comments: 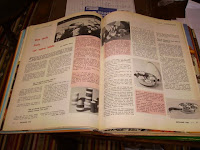 Bound copies of 'Cuisine et Vins de France' for the entire period from April 1965 through until the end of 1973. The Technical Dept found them languishing on French ebay - apparently having spent the last few decades gathering dust in an attic in Besancon - and he snapped up the lot! Quite apart from this covering the years during which Richard Olney was writing for the magazine, it is an absolute Aladdin's cave of 'new' material. Logically, you'd think that anything good from that period would have made it into the culinary firmament and long ago become tried-and-trusted and thoroughly familiar - but in practice, it doesn't seem to work like that: I've recently been digging through a couple of books of recipes by Simone Beck, dating from the early seventies, and have unearthed one previously (to me) unknown gem after another in the process. Cuisine et Vins promises many, many excellent things...

With sources like that available, it makes me even more jaded when contemplating the endless quantities of glossy offerings from the likes of Nigella and Angela and Delia and Gordon...where (although I confess, I don't actually own any, but I have glanced at them in bookshops, on occasion) it seems that a few rather obvious ideas are being milked ever more painfully to death.
And yesterday morning, it was with horrified fascination that I listened on Radio 4 to somebody who called themselves a 'food futurologist' wittering on about 'popcorn, coated in white belgian chocolate, served with strawberries', and extolling the apparent virtues of cupcakes. Pitiful!
Tonight's Dinner:
Steamed and fried Gyoza with vinegar dressing
Celery Risotto
Chocolate Zabaglione
Posted by Pomiane at 13:21 3 comments: