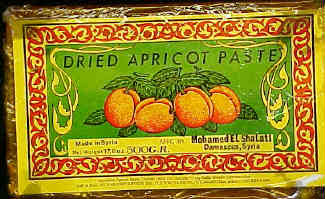 A new discovery. Dried Apricot paste from Syria. I'd not come across this before, but a new arrival on the bookshelves at Christmas was the first Moro Cookbook - the result of a dinner at Moro several weeks before, where an interesting sauce for roast lamb prompted subsequent purchase of the book. Perusal of its pages identified a number of previously unknown ingredients, of which one was Amar Paste, which - as with many ingredients which have been phonetically imported from their language of origin - appears to have a variety of names in English. In Moro, they refer to it as Amradeen, but this must be quite an unusual variation, as it produces only limited resonance on Google.

From memory, the paste is generally melted in hot water before being used - the book is sitting in Italy, and I won't be able to check the details until the next bi-monthly trip, next week. In appearance, the paste is a gelatinous sheet, slightly orange in colour, and the flavour is subtle - one can certainly imagine it working well with meat dishes, without introducing that rather unfortunate jammy quality that is so often the result when fruit is used in conjunction with red or white meats.

In the meantime, it was decided to give it a try here as the basis for a new after-dinner chocolate. Triangles of Amar paste cut out and then enrobed in tempered Felchlin Grand Cru. Fantastic! The result is like a distant and very sophisticated cousin to both an After Eight mint and a Jaffa Cake - wafer thin chocolates, with a subtly fruity interior. Highly recommended!

I got my Amar Paste from 'Archie's' in Moscow Road, W2. A fairly industrial quantity costs about a pound. And as for the tempering, I freely confess that I do not do it by hand - I researched that several years ago, and concluded that life was far too short - but instead use a small computer-controlled device called a Chocolatier Electronique, which is both quick, entirely reliable, and idiot-proof.

Poached Egg on Ratatouille (I love the combination of the egg yolk with the tomato and pepper in the ratatouille. For the latter, I use Julia Child's method, where the Aubergine and Zucchini are cooked separately and only added in at the end, to preserve the identity of the separate flavours within the finished dish.)

Fillets of Bream, with Basil & Tomato: For recipe, see below.

Cherry Tarts - fresh, stoned cherries on a base of sugar and flour, piled into phyllo shells and baked at 200 degree C for twenty minutes, or until the cherries have entirely collapsed and their liquid has mostly run out, to be absorbed by the flour & sugar mixture.
Posted by Pomiane at 10:48