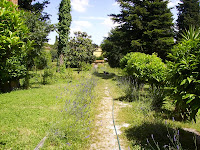 It was a year ago this weekend that we first set eyes on the house at Santa Caterina. And already more than three months since we first started sleeping here - I hesitate to say 'since we moved in', as 'moving in' is an ongoing process, and will remain so until the old house in Via Fucini has been sold and the remaining furniture moves from there to here. At the moment, living here is like up-market camping...quite a few of the rooms echoingly empty of all but a few sticks of furniture, windows generally curtainless, and pairs of old doors leaning next to the doorways they're intended to grace (but for which we have yet to find supports which are the right size for their antique hinges).

Having said which, it's wonderful. The topography of the courtyard between the house and the church inexplicably produces a constant gentle breeze which flows from the direction of 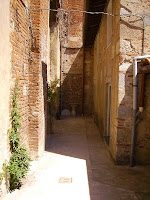 the Priest's house, and in through the windows of the dining room, on the ground floor, and of the bedroom above. Each morning we wake to the view, two rooms away, through the dressing room window, of terracotta tiles, and then of sunlight on the intensely white facade of the church...blue sky visible beyond.
For the most part, the house and garden are swathed in silence, apart from birdsong...and the few outside noises which do intrude from time to time will soon be covered by the sound of trickling water from the fountains we'll be connecting in the courtyard and on the terrace, and by the sound of water from the larghetto beyond the barn. While we're in London this week, Giancarlo will be working on the ground floor terrace (concealing dusty concrete behind a covering of terracotta) and will then start working on the terrace to be constructed beside the larghetto. The whole project will be work-in-progress for some time to come...but I hope we'll have broken the back of it in time for August, when everybody downs tools, the World stops for two or three weeks, and Pisa, blissfully, becomes a ghost town. 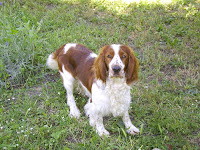 And the other anniversary is the junior four-footed. A year old. I hadn't realised that it had been on the same day that he was born and that we first saw this house. An auspicious date.
He celebrated by running in and out of the sprinkler on the north lawn, and then racing around on the flowerbeds and getting generally caked in mud. In seventh heaven!

Tart of Nespole and Almonds.
Posted by Pomiane at 12:53 1 comment: