Quote of the week was from Michelle de Kretser's 'The Lost Dog' - a splendid piece of writing, the absence of which from last year's Booker shortlist is yet another reason to denounce the 2008 judges as a bunch of halfwits. And the quote itself, richly loaded for all the spareness of its phrasing:" ...takeaway (food) was an offence that compounded profligacy with neglect. Love merited the effort of indifferent home cooking." It speaks volumes!

Discovery of the week: was that in making posset (as in Marsala Posset with Prunes) it's necessary to have an astringent of some kind in order to make the cream set

properly. As long as the flavouring agent being used is wine-based ( sherry, for example, or marsala) then that will do the trick. But in trying a version that was liqueur-based instead - as I did several days ago, when experimenting with a Blackberry and Amaretto version - then you have to include a generous squirt of something like lemon juice in order to kick-start the process. (I don't entirely understand why this should be, as the process of making clotted cream relies entirely on heating the cream, and includes no additives at all...so, go figure). If you leave out the astringent when making posset, though, then the cream won't set properly and will just remain half-heartedly runny.

ecipe of the week: a staggeringly good ice-cream, made from Crème Anglaise (6 egg yolks, 6 tbs sugar, 500 ml milk, half a tsp vanilla essence), 2 tbs Fowlers Black Treacle, half a McVities Ginger Cake (diced), 1 tbs dark rum, and 50g of finely diced candied orange peel. Lots of strong flavours vying with each other for attention, but none of them completely dominant or even readily identifiable in the end result. Best served with something like apple pie, that will cut the richness of the ice cream.

Buy of the week: a small copper saucepan, specifically for making sauces in exquisitely 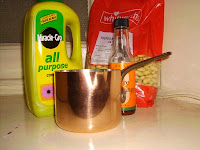 concentrated quantities. Not sure what it cost, as the Tech Dept found it on ebay, and muttered vaguely that it was 'around a fiver', when quizzed on the subject. A bargain, by any measure. (It's already joined the growing pile of things to be transported to Italy, next week - along with a pair of Holbelias, five picture lights, a bottle of Boyajian Orange Oil, a set of sofa cushions, some Miracle-Gro plant food, and a kilo of peeled almonds...) 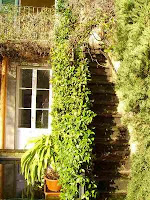 of the week: what in God's name are we doing in grey and cold and dismal London, when Tempo Italia shows that the weather in Pisa this week is glorious?

Meringues, with Crème Chantilly and Raspberries
Posted by Pomiane at 10:00 1 comment: 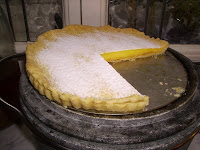 Two things make this recipe a phenomenal success:
1. Use of ‘00’ flour for the pastry (not only does it produce a superbly-textured pastry, but the flavour of the baked tart shell is distinct and delicious – not unlike a particularly good digestive biscuit); and
2. The filled tart should be baked in an oven set at only around 130 degrees C, so that the filling ‘sets’ rather than ‘cooks’; this gives it a wonderfully velvety quality.

Over the years, I’ve tried many different methods for making Lemon Tart. This one is as good as it gets!

For an 8” diameter tart.

Ingredients: Short-crust pastry made with 5 oz ‘00’ Flour, 4 oz Butter and water; 4 Eggs; 2 oz Sugar (or equivalent volume Splenda); zest from 2 Lemons, and the juice from 1; half a cup of cream. Icing Sugar, to dust the surface of the finished tart.

1. Roll out pastry and use it to line a greased (or Trennwaxed) 8” false-bottomed tart tin. Leave to rest in the fridge for half an hour, then bake blind for twenty minutes in a 200 degree C oven. (The shell needs to be fully baked at this stage).

3. Whisk the Eggs in a bowl with the Sugar (or Splenda); whisk in the Cream, along with the Lemon zest and juice (and if you have any Boyajian Lemon Oil, then add a couple of drops of this also – it raises the lemon ‘hit’ significantly).

4. Pour the filling into the tart shell, and bake for approximately 45 minutes; remove from the oven as soon as the filling is clearly no longer liquid when you gently shake the tart tin to test for done-ness.

Allow to cool, and sprinkle with Icing Sugar. Serve. 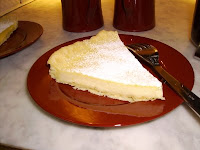