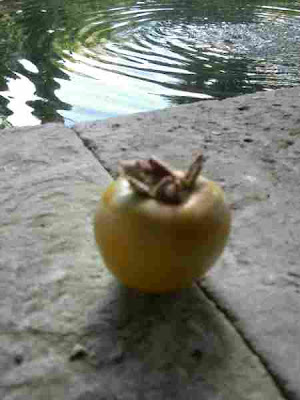 ....is the Persimmon! It ought to be otherwise, the very name suggesting something exotic and spicy, with a Shakespearian vision of the fruit piled high on a Venetian wharf, and freshly delivered by the bushel from the mysterious Orient.....

The mysterious Orient bit is largely true, since the variety most often found these days was introduced to the West from Japan, but that wasn't until the 1800's, when it was transported by the redoubtable Commander Perry - who seems to have got about a bit. There was a native american version kicking around before that, apparently, from which the word 'Persimmon' is derived - a bastardisation of its name amongst the Algonquin Indians - and this is the name it has in Britain and the US. Elsewhere, it seems to have retained its japanese name of Kaki - and this is the name by which it is roundly cursed as the bane of my life every year at this season. 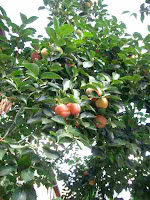 We have a Kaki tree in the garden - inherited, and of some age - which has now been trimmed and pruned and trained to become a very handsome thing. The only problem is the fruit. Vast quantities of the stuff. Tasteless and without purpose in the kitchen, it grows fat and threatening in the course of September, and then begins to rain down upon whatever is below. ....

Normally, we try and remove all of the unripe fruit in August, when it's still small and manageable - last year, there were thirteen bin-liners full of hard, green, plum-sized exam 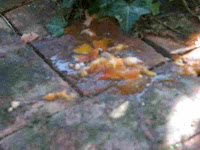 ples - but, for some reason, this year that particular task got overlooked. We now have a glut! Hundreds and hundreds of the things, dangling there, just waiting to plummet and burst on the paving stones below, to leave disastrous-looking globs of day-glo orange jelly everywhere, like the leavings of some invading alien force from Quatermass! I take my life in my hands if I walk under the tree after dark, en route to collecting a lemon or some bay leaves, and every time expect a gelatinous explosion on my head as I do so......and the first and messy task every morning is to clear away the detritus from the night before, before the sugar inside the fruit turns the paving stones irremediably to black...

Elizabeth Schneider gives a few (rather unconvincing) recipes for Kaki in her Uncommon Fruit- although clearly it's for a different variety, since her's have a pointed end, which mine don't - and I read once in Harold Magee that if you wrap them in clingfilm and bake them in a very low oven for twelve hours or so you can render them decently edible (but why would you go to all that trouble?). Giuliano Bugialli has recipes for both a Persimmon Cake and a Persimmon Cream in his Tuscan book, but again it reads like an awful lot of work for a rather ho-hum result. (OK, I admit it - I'm biased against the damned things!I've trodden too many times in too much orange mush for it to be otherwise.....!)

No. What's needed is a spray that will take the blossom out when it first appears in spring, and thus stop the whole process before it's started. I've tentatively enquired in the past about the existence of such a thing.......but I've found that the idea of destroying a crop at birth isn't designed to bring a smile to the face of any horticulturalist. Reminiscent of the time I was asking a succession of wideboy shop assistants in Tottenham Court Road if they had such a thing as a mobile-phone-jammer (the Technical Department had suffered in too many restaurants and on too many trains, and wanted one for Christmas). Not surprisingly, I suppose, I didn't have any great luck there, either....

Tarts of Clams and Mussels

- all washed down with a rather interesting 1999 Radikon

If you CAN have too much of a good thing....

....then this weekend hasn't been much proof of the fact! Two glorious concerts in a row. On Friday evening, Lieder by Brahms and Greig, performed faultlessly in the Duomo by Bernarda Fink, accompanied by Christian Koch. It was so good that there were moments when I could feel shivers running down my spine.

Made even better by the fact that expectations had not been high, since the performance had been transferred from the Camposanto (it's our version of that depressing one-liner: 'and in the Church Hall, in the event of inclement weather....' ) and generally speaking the acoustics in the Duomo are quite wrong for that sort of thing. La Fink held it together marvellously, though......and the end result was sublime.

ast night, we had the Concerto Italiano performing Montiverdi Vespers - except not the 1610 version, as some of us had been confidently expecting, but a rather more obscure version - the effect of which, it was generally agreed, was absolutely mesmerising. The Laudate Dominum was particularly beautiful, as it rang back and forth across the nave, in a ghostly, ethereal echo of itself.
The Brancolis brought down a charabanc-load of house guests for the occasion, a collection of poor unfortunates who had been 'persuaded' to 'volunteer' their services (and I use the words advisedly) for the good of the Brancoli vendemmia........although, in practice, the weather has been such that by the time they'd all arrived in Brancoli, the grapes had already had to be collected in - probably to the great r 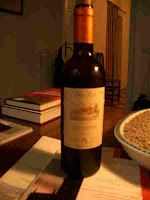 elief of all! Before last night's concert, we dined on Rabbit & Lemon Terrine (made in August, and gently maturing in the fridge ever since), followed by involtini of Leek & Parmesan, with Braised Lettuce, and then Pear & Chocolate Tarts with Chocolate Ice Cream . The high-spot of dinner, though was the glorious Sicilian dessert wine - a 2005 Ben Ryé - generously provided by the guests, which not only tasted like bottled sunshine, but had the additional merit of coming from Donnafugata, the estate in Santa Margherita di Belice where much of The Leopard was set, and even where Zefirelli filmed it......

And possibly the best thing about it, is the fact that we drank less than half of it last night - and since it's already open, we have no choice but to finish it off tonight.

Tonight's Dinner (Dario is coming, to ponder, over a glass or two, his future career as a globe-trotting paleo-pathologist....):