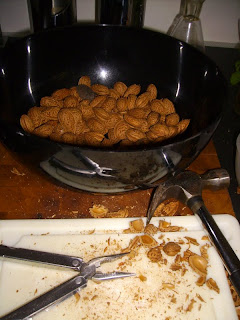 Shelling almonds from the trees in the garden. It's a much messier and more complicated business than you'd think - at least the way I do it, it is - and involves a lot of banging, and bits of shell flying to all corners of the kitchen in the process. Possibly I'm doing something wrong, since other people write as though it's akin to shelling peas, and something you do as you sit in the autumn sun, sharing a sociable glass of something with a neighbour as you shell nuts and generally pass the time of day. I believe people write untruths in many instances, however...and certainly, any neighbour foolish enough to be anywhere near me as I perform brutal acts on innocent almonds would need ear-plugs and protective clothing, at the very least. 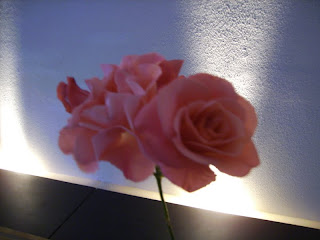 Late roses, flowering prettily. This one is Anna Livia, but we also have blooms on Alec's Red (wonderful scent!), English Miss (possibly the prettiest of all the roses in the garden), Margaret Merrill, Evelyn Fison, Iceberg, and Queen Elizabeth. With luck, and judicious dead-heading, we ought to have some flower on some roses right through until Christmas. 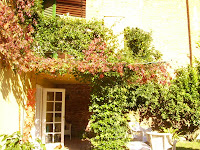 Parthenocissus, puttting on its glorious autumn colour, and draped in garlands over the biggest of the Cypress trees, and above the terrace.. 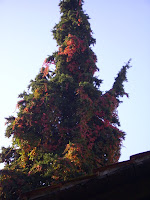 Fruit on the orange trees growing at an alarming rate, and in a quantity that makes me wonder what on earth we'll do with it all, short of providing jars of marmalade to the whole of Tuscany... 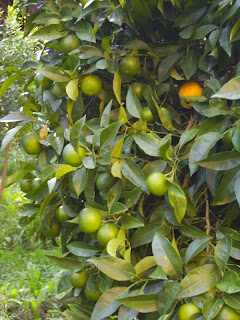 Getting stuck in with the task of widening existing beds and digging new ones, all as part of the new pergola scheme...it all looks a mess right now, but will repay the effort by next spring...( it had better!) 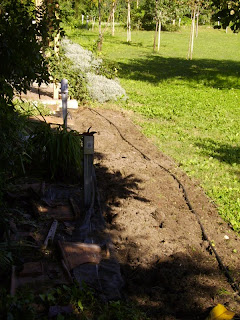 And, since Friday evening, endless torrential rain. With the result being a four-footed with cabin-fever, and a lot of cooking having been done ....cakes, pastry, soup, plombieres...cold weather food. 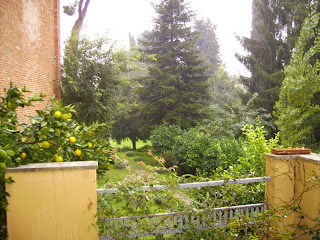 ...is a porcini feast with the Pauli. Doubtless, after drinks in front of a blazing fire.