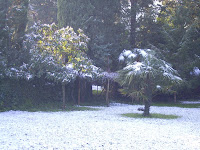 Yes, I know. Everybody has snow, it seems....Paris is covered, London has ground to a halt (just for a change) and most of Europe appears to be blanketed. The last time we saw it in Pisa was five years ago, though, so I think I can be forgiven the headline exclamation mark. The dogs were mildly interested... bu 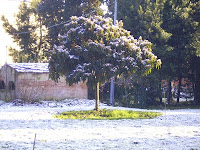 t not enough for them to brave the cold for long in favour of returning to a warm kitchen filled with the aroma of coffee and freshly-baked shortbread. 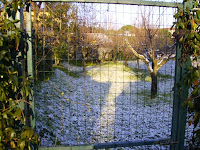 According to Tempo Italia, the weather is set to remain arctic for the next 24 hours, and then we return to normal - by Tuesday, temperatures are set to be in the mid teens once more, an 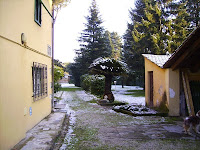 d heading yet further upwards in time for Christmas. For the moment, though, it seems appropriate to close the shutters against winter darkness and hunker down inside, beside the fire, in the company of a glass of prosecco and a plate of paprika-roast almonds... 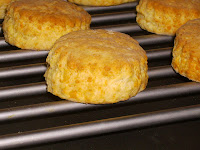 An enduring memory from ages past. The cheese scones in the UL - large and light and delicious...and never quite enough butter provided on the side of the plate to last until the final mouthful. The height of indulgence would have been to have had a second one - although I'm not sure that I ever did, undergraduate finances being what they were. Consumed in winter in the noisy, fuggy atmosphere of the tea-room, or in summer, stretched out on the lawn in the south courtyard. Not quite a Proustian madeleine...but not far off.

I've been playing with recipes, and this is the closest I've come. These scones take almost no time from start to finish - five minutes to make and roll out the dough, and fifteen minutes in a pre-heated oven. Best eaten still warm, broken in half and buttered generously. Since the elderly relative has come to live with us, a little-something has become the order of the day, at lunchtime (although I suspect that most of the ER's lunch ends up inside the four-footed, who negotiates shamelessly to that end). Once a week, therefore, I bake bread - one for the bread bin and one for the freezer - and on the occasions when I've forgotten and we've run out of bread, then this scone recipe is my immediate refuge.

2. Cut the Parmesan into 1 cm (approx) dice, and then process these into fine crumbs in the food processor, along with the (optional) chives

3. Add the Flour, Baking Powder, Bicarb, and Salt to the processor bowl, and process briefly, just to mix everything together.

4. Cut the chilled Butter into dice, add to the contents of the processor bowl, and process for about thirty seconds, until it looks like sand.

5. Add the Milk and process again for twenty seconds or so, until the mixture has gathered itself into one lump.

6. On a floured surface, roll out to a thickness of just over 1 cm, then use a 2" circular cutter to cut out the scones, which should be placed on a greased baking sheet. Gather up the trimmings and roll out and cut again, until all the mixture has been used up. Brush with egg or cream, to glaze the tops, before placing them in the oven.

7. Bake in the pre-heated oven for about fifteen minutes, until the scones have risen and the tops are a deep golden brown.

8. Let rest on a wire tray for a couple of minutes, and then, as soon as they're cool enough to handle, dig in!
Posted by Pomiane at 08:55 No comments: