One of Jennie's offering's for last month's Masterchef Weekend, this is light, delicious, and perfect for the current summer heat. If you like, you could add chopped fruit (plums, cherries, strawberries...whatever you happen to have) to the basic recipe, as it churns in the machine - but, personally I prefer the refreshing crispness of the penny-plain version. Perfect at the end of a languid summer lunch...
For six servings.
Ingredients: 250g Mascarpone; 270g Sugar; juice of one large Lemon.
Method:
1. Heat the Sugar gently along with 350 ml water. Stir until the Sugar has all dissolved, then raise the heat and bring briefly to boil, before removing from heat.

2. Add the Lemon juice, and then leave to cool down for twenty minutes or so.

3. Put the Mascarpone intoa bowl and whisk to lighten the texture, then stir into this the colled Sugar syrup.

4. Put the mixture into the fridge to chill for about an hour, then churn as normal in the ice cream machine. Freeze - but remember to transfer the sorbet from  freezer to fridge about half an hour before serving, to allow the texture to soften appropriately.
Posted by Pomiane at 09:26 No comments:

" .....Tuscans, Florentines in particular, are so fond of vegetables that they would like to stick them in everything. Thus, in this dish they put Swiss Chard, which, in my opinion, goes with it like the bread soup with the Credo[i.e. not at all]. I fear that this excessive use of vegetables may be one of the causes, and perhaps not the least one, of the weak constitution of certain groups of people who, when struck with some illness, are unable to fight it off, and so drop to the ground in droves like leaves in late autumn..."
So stick that in your 'five a day'!


We must surely be about due for a shock-horror discovery that in fact Fast Food, in industrial quantities, is the healthiest choice of all!

Tonight's Dinner:
Triglia Risotto
Steak in Diavolo Sauce; potatoes roast with garlic, sage and rosemary (Gian Carlo, who is currently building for us the new pergola which will ultimately go round three sides of the North Lawn, yesterday produced a crate of potatoes and tomatoes from his own garden, with a gruff injunction to try them, and see if they weren't better than the water-filled stuff you buy in the market)
Phyllo Tarts of Raspberries and Blackberries, on a vanilla-flavoured Crème Patissière
Posted by Pomiane at 09:26 No comments:

A summer lunch in Tuscany... 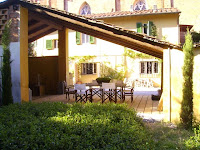 The Belfortes passed through, one of them en route to the airport (sometimes I wonder if we aren't actually operating an additional departures lounge), and we lunched in the open barn. A bakingly hot day, so something light and refreshing was called for (although the Technical Department was muttering about replicating the wedding breakfast that Alain Ducaisse churned out last week for the 1600 guests at the Monaguesque wedding!).
Kir Royale (with passion fruit, rather than cassis), was served, with bourekia.
Chilled Pea Soup.

Fillets of Triglia, lightly fried, with a green olive tapenade, on a bed of Courgettes, wilted Rocket, Capers and Garlic, all sautéed in butter.

Apricot Ice Cream (in fact, vanilla ice cream, but with the last of the fresh apricots from the garden chopped into it while it was churning.)
Coffee.
Carriages (for the airport and the station) at 15.30.
Posted by Pomiane at 09:11 No comments: