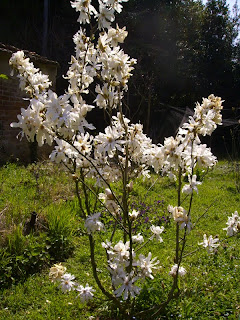 Glorious weather!
Blossom everywhere you look: the nectarine and apricot trees have finished already, and the almond blossom is almost over; plum and peach is still getting into its stride, with pear, quince and cherry soon to follow.. 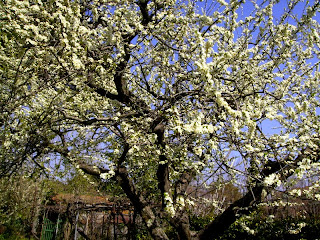 The crocuses are done for the year - we had a great white carpet of them around the lilacs and camellias, beside the entrance walkway - although (perhaps a little strangely) the narcissus are still just on the verge of bursting into flower...hundreds and hundreds of them, lining the grass path which winds its way under the pine trees. 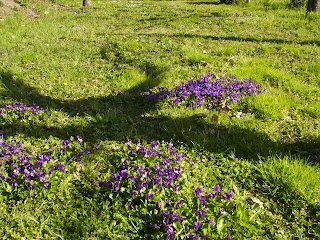 And everywhere, massed clumps of violets have appeared; they grow here naturally, and although we've had some each year in spring; this year, they've gone completely crazy.. 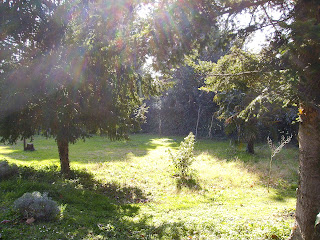 Three magnolias are flowering generously, and doing so well that
I think I might get some more - of the slower growing varieties - to plant alongside
the (still to be constructed...la Roma non era construita nel una giornata) new pergola beside the north lawn. 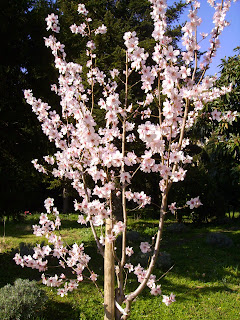 The doors to the garden stand open right through until nightfall, every day, which pleases the four-footeds enormously.
Tonight's Dinner:
Pork Casarecci
Roast Lamb, with Gratin of Courgettes
Chocolate Tart, with cassis sauce
Posted by Pomiane at 11:20 2 comments:

The hot news this past week was from the Harvard University School of Public Health linking some death-related conditions with over-consumption of 'red meat' and 'processed meat'. John Humphries was giving some softly-spoken 'Food Scientist' (and yes, I do use that term with a clear curl of the lip) a remarkably easy ride about it on the Today programme - maybe he felt she was such a poor unfortunate that it would have been unfair to have properly grilled her about the vapid nonsense she was so confidently spouting.
Anyway, in place of merely hurling insult - or, at the very least, before doing so - I was intrigued to look into the provenence of the headline-grabbing news. And the answer is that it came from  the 'American Health Professionals Study' and the 'American Nurses Health Study'. Why these? Well, the reasoning seems to be that people linked to the Health Industries would be more likely to fill in the forms year after year than an average citizen. Having actually looked at the forms, I suspect you'd have to be slightly um...unusual... even to subject yourself to this process...but, each to their own. The Nurses study was obviously composed of nurses, but the information in the men's study came from a combination of 29,683 dentists, 4,185 pharmacists, 3,745 optometrists, 2,220 osteopath physicians, 1,600 podiatrists, and 10,098 veterinarians (woof!). The form they had to fill in is here  http://www.hsph.harvard.edu/hpfs/pdfs/94L.pdf
This is the 1994 version and the questions on meat are on pages 5 and 6. The questions vary slightly over time, but in 1994 the questions concerning meat consumption per month, per week and per day were as follows:

You can draw your own conclusions, but clearly the questionaire is very American in focus and assumes that hamburgers and hot dogs are an important part of the diet - as it should. I note also that pork is sometimes bundled with beef and lamb, and sometimes not, and ham is considered a red meat not a processed meat, and a slice of salami is considered the same as a whole sausage. And veal doesn't exist. Lasagne is a red meat dish but spaghetti bolognese isn't - Spaghetti comes under Breads, Cereals and Starches.
The study requires the respondent to state how much of each they ate during the last year.
Since I do all the menu-planning and associated provisioning in this household, I'd be better equipped than most, I suspect, to answer a question like that - and in fact, I know that even my answer would be no more than a wild (and probably wildly inaccurate) guess.  Do I know how many slices of salami I have eaten in the past year? Unless I'd turned vegetarian (as if!) and could confidently answer 'no', then the answer could be anything between 20 and 300. There's room in there for a pretty good margin of error... 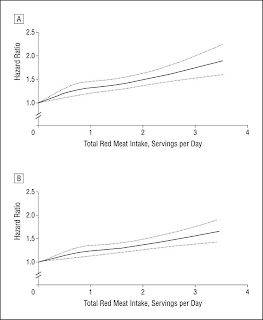 This chart shows the relationship between the risk being run by someone having a portion of red meat every day, and those eating 2 or 3 portions every day. The upper chart A refers to men and the lower chart B to women.
Clearly, from the chart, those eating 3 portions of red meat a day every day are indeed at greater risk than those eating less.
Who are these people? Why are they eating so much meat? Do we know anyone eating 3 portions of red meat everyday all year long? What else are they doing to excess? Should we be told where they live and the places they frequent, so that we can take avoiding action?
Do we need to be warned against doing something we had no intention of doing in the first place?
As they used to say "GIGO". Garbage information in, garbage information out.
Tonight's Dinner:
Salmon Mousse with Dill Sauce (that's 'Pink' rather than 'red', and 'fish' rather than 'meat' - although who knows how it might be classified by people indulging in health-related food research)
Pork loin (could be 'red', could be 'white', could even be 'cereal') with vanilla and garlic, pot roast in Coconut milk and stock; caramelised onions (in butter! even including a pinch of....sugar!!).
Tarte aux pommes (in cholestrol-rich instant-death-inducing pastry)
Posted by Pomiane at 11:52 No comments: