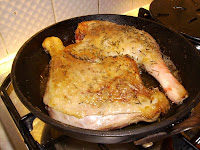 Nothing to beat it - a deliciously crisp skin, and meat in which the flavours have been richly concentrated by long slow cooking. There's no waste, as the meat falls cleanly from the bones; and it's a time-efficient dish as well, since the process of re-heating the pieces of confit takes only twenty minutes or so in a medium-hot skillet...which is perfect for post-cinema supper, for instance, or having just got home, at the end of a long day.

These days, I generally make confit from the legs and wings of any duck I buy. The bird is boned, breasts are reserved to be grilled separately (from a decent sized bird, two breasts will be ample for four servings), the bones make a rich stock, the fat is trimmed and reduced for future use, and the legs and and wings go for confit. That way, one bird has the makings of six different dishes for two people, which is pretty efficient household management however you look at it.

Ingredients: Legs and wings from a duck ( a 2.5 kilo bird is a decent size for this- you can use smaller, but a bird this size will give generous servings); 2 tsp Salt; approx a dozen grindings of Black Pepper; 3 dried bay leaves, crumbled; 2 tsp dried Thyme; duck fat, approx 1 pint.

1. Place the duck pieces in a bowl, and coat them with all of the other ingredients, apart from the duck fat.

3. In a large, heavy pan, fry the pieces for ten minutes or so on each side over medium heat. They should be lightly browned all over.

4. Place the browned duck pieces in a shallow oven-proof dish, pour the fat over them, and cook in the pre-heated oven for two and a half hours.

5. Leave to cool completely in the fat, and then store the confit (still encased in fat) somewhere cool. When you want to eat it, pull the pieces of confit from the fat and fry gently for twenty minutes or so, until heated through. The fat can be retained for making future confit, or just for use as a frying agent in the kitchen.

Theoretically, the confit will be fine to eat even if left for for several months - I think the longest I've managed to last is about three weeks before breaking down and serving it! 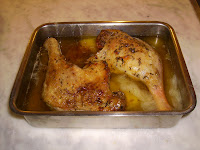 Maria's words...or mimes...at the beginning of the week must have struck home, and the Technical Department has the bit firmly between his teeth on the weight-loss front. Rather depressingly, there's mention of no pasta or risotto (for which also read 'nor pastry'.......nor potatoes) for several months to come. Which wasn't entirely what I had in mind...

Starters and main courses are actually quite easy on a low-carb regime. Shellfish in a

ny form for starters: moules marinières; crayfish tail salad; prawns in cream & vermouth; crab tart (phyllo pastry shell, naturally); scallops - either as they are, in various forms, or as a mousseline. Or chicken livers, with wild mushrooms in a crisp tart shell, or lightly sautéed with garlic to go on top of a salad; or smoked salmon, either tiède, on a soubise of onion and basil, or as a timbale, with basil and celery and a gazpacho dressing....the list is fairly long.
Main courses are pretty straightforward: meat, fish and poultry are pretty much ok, in whatever form they'

re cooked, as long as there's nothing en crôute. Vegetables are a bit more demanding, but not much: parsnips are out, as are potatoes; carrots should be avoided.....tomatoes and peppers are surprisingly low in carbs, and as long as you stick to the 'greener' end of the vegetable spectrum, then it's pretty much ok (asparagus, mange tout, beans, broccoli - anything like that is fine). Steamed and mashed broccoli or cauliflower make surprisingly good substitutes for mashed potato.

Desserts, however, require a lot more thought. IMHO, custard-type fillings don't work very well with phyllo pastry shells - which is the only kind of pastry really permissible if you're being serious about being low carb (the TD weakened at this point, and began to mutter about "if it's rolled really thin, then shortcrust surely would be ok, if it's just for individual tarts" ; I don't think so....not if we're taking this seriously...sounds like the thin end of the wedge to me...and it wasn't my choice, after all, to veto pasta and risotto!). I suppose, if one really hungers for the taste of a chocolate or lemon tart, then there's always the option of baking the filling inside

a ramekin, and foregoing the pastry - but I suspect it would be a rather dismal substitute for the real thing. So, without shortcrust or puff pastry in evidence, it's apple, pear, cherry, peach, and blueberry tarts...and as long as the phyllo shell also contains a layer of slivered almonds, then I think you can just about get away with a filling of flavoured crème pâtissière, topped with a layer of fresh strawberries or raspberries. And as far as any creamy desserts are concerned, it's a question of working out which ones require sugar in order for the texture to work properly (in which case, they're off the list) and which ones will be fine with just Splenda instead. So, bavarois, semifreddo and panna cotta are 'in', but ice creams and sorbets are definitely 'out'.

I'm sure there will be more on this in due course; I hope it doesn't become tedious...

Unmoulded Mousse of Celeriac, with a Mustard Cream Sauce.

Blueberry and Vanilla Tarts.
Posted by Pomiane at 12:42 No comments: