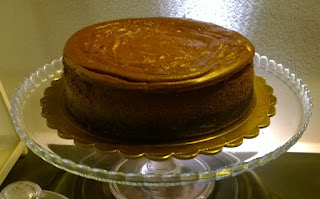 This presents as a lot more decadent than it really is....as long as you substitute sucralose for sugar, at any rate, and since sucralose works just as well, then why wouldn't you?

This is from the pages of a book rather unimaginatively called 'Chocolate Bible' by Christines McFadden and France, which has been languishing un-regarded on the bookshelves in London for the past few years - I must have bought it on a whim, at some time, and then forgotten that I had. Anyway, it got included earlier in the year in a shipment that was being sent from London - more as ballast than anything else - and it was only after it had got to Italy that I settled into it properly, for the first time. And it is treasure trove!

This particular recipe was tried, and got a massive thumbs-up, early on - of the 'this alone justifies the purchase of the book' type of accolade - and it was then repeated as dessert for the TD's birthday dinner.

Rich and dense in texture, the addition of cinnamon in the base and sour cream in the cheesecake itself both give it a beguiling edge. And served with a simple raspberry coulis, it is heaven!

Serves 8 (ish, depending on greed)

1. Heat the oven to 180 degrees C. Line the base of a springform tin which is 9 in x 3 in with greaseproof paper, and grease the sides of the tin.

2. Process together biscuits, butter and cinnamon, and press into the tin to make the base of the cheesecake.

3. Melt the chocolate in a double boiler.

4. Beat the cream cheese with the sugar and vanilla, and then beat into this the eggs, one by one.

5. Mix the sour cream with the cocoa powder, and then add this to the cream cheese mixture, before folding in the melted chocolate. Once the chocolate is properly incorporated, pour the mixture into the tin and bake for an hour.

6. Leave to cool in the tin, and then remove to a serving plate. (Best to run a thin-bladed knife around the edge of the cheesecake before relaxing the spring, in case part of the cheesecake adheres to the tin.) 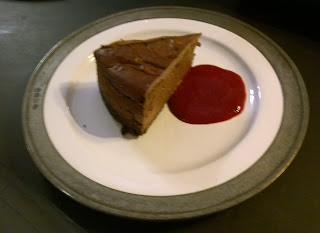