...was included recently in the Wall Street Journal's list of the top ten places to eat in Europe. It's in Romilly Street in Soho, in the building which was Lindsay House for such a long time (somewhere I recall as falling significantly short of its PR positioning, frankly...the food was definitely 'OK', rather than anything special). Anyway....Gauthier. Technical Department and I were discussing the WSJ listing in the car the other evening, as we drove up to Brancoli, for dinner and to return their lawnmower which we'd borrowed when ours broke, back in August. TD, who had rea

d the WSJ article ( I hadn't) was of the opinion that the Gauthier menu included far too much mackerel for his liking, and that the overall tone of the place seemed to be as a place of worship rather than somewhere just to go and have dinner. (We grew out of the food-as-a-form-of-worship thing many decades ago, and these days, great food should be good enough to cause a short pause in good conversation, but should then act merely as an adjunct to it, and not take over.)

was with interest that we heard that the Brancolis had dined at Gauthier a couple of weeks ago, and had been served rather more protein than advertised in the menu. In the form of two dead beetles (one each....clearly, it was an equal opportunity slip-up) in the base of their wine glasses. They were working their way through the tasting menu, item four (or so) of which was some kind of venison, accompanied by a southern rhône. And a couple of beetles. Both very dead. The sommelier and waiters gathered round and gazed in silence at the offending corpses, leaking redly onto the tablecloth, before efficiently removing them, and then carrying on as though nothing had happened. To the extent that they made no mention of the incident even as they presented the eye-wateringly large bill at the end of the evening. The Brancolis were probably more stunned by the lack of reaction than they had been by the event itself. ..so much so, that they were out in the street before they'd thought

to raise the matter (although, equally, since it was a celebration dinner, neither was keen to cause a scene). No apology was forthcoming, no offer of recompense (money off? a bottle of something? an invitation to come back as guests on another occasion?....forget it!). Incredible.

The only explanation we could come up with for the bizarre lack of reaction was that the business model for a restaurant like Gauthier must be that dining there is expected to be a one-off event, and that they don't think their clientele will become regulars (and so they don't need to bother). Which is a bit of a self-fulfilling prophesy, if you think about it. I know of at least two diners who won't ever be going back! But then, I can also think of two others who won't now consider it even for the one-off option...so, possibly the business model is flawed. Pause for thought, Monsieur Gauthier.

Ravioli, stuffed with bietole and ricotta.

Bakewell and Black Plum Tarts.
Posted by Pomiane at 10:14 8 comments:

This is one of the best last-minute dishes I've ever found. Perfect for those occasions when prep time has disappeared, and dinner needs to be conjured out of airy nothing in about ten minutes flat! Best of all with fresh pasta (I generally serve it with fettucine...which takes around ten minutes to roll out and cut, with about fifteen minutes elapsed time between the two processes), this sauce is still pretty good even with the stuff out of a box or packet.

The recipe comes from Marcella Hazan, and is to be found lurking amongst the also-ran pasta sauce recipes in Volume 2 of Classic Italian Cooking -I'd owned the book for years before I got round to trying it. Many recipe writers today (and I suspect Hazan herself would be amongst them, these days) would disdain powdered stock as an ingredient; in fact, it is quite brilliant here, and works wonderfully well with the astringence of the rosemary.

The sauce is so quick and simple, you need only start it at the same time as you put the pasta-cooking water onto heat (for fresh pasta) or after you've put boxed pasta into the pan, and you still have a few minutes before it's done.

Ingredients: 4 oz Butter; about 6 sprigs of Rosemary, each one 4" or so long; half a teaspoon of powdered chicken Stock, or half a stock cube, crumbled between your fingers.

1. Melt the Butter in a small pan, over low heat; the butter wants just to melt, and certainly not to colour or start to bubble.

2. Strip the Rosemary needles from their stems, and chop very finely. Add this to the melted Butter, along with the powdered Stock.

3. Stir everything together, until the powdered Stock has dissolved into the Butter. At this point, turn off the heat, and stir into the cooked pasta as soon as it has been drained. No further seasoning should be necessary, and parmesan shouldn't be served with this dish, as it would only fight with the delicious flavours already there.
Posted by Pomiane at 12:48 No comments:

And then the sun came out... 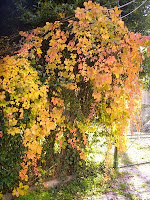 It was a lousy week. Easyjet managed to smash the Della Robbia cast that we had optimistically given over to them to transport from London to Pisa (not 'broken', but well and truly 'smashed'...); the lawnmower broke down again, about an hour of use after it had last come back from the workshop; the car got a flat battery twice; the van bringing new sofas from Florence got within 200 yards of the house, and then enc 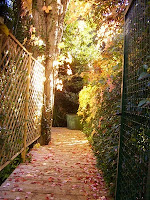 ountered roadworks and simply turned round and took the sofas all the way back to Florence once more ; the TD's laptop died on him; and we had day after day of rain, which gave rise to significant canine cabin-fever...

And then...the sun came out. The garden looked glorious, rich in autumn colour 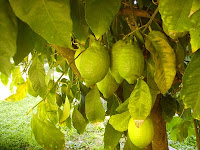 s, the citrus trees are groaning under a phenomenal crop of lemons and oranges, and we found it was still warm enough to lunch outdoors for three days in a row. I planted bulbs, and jasmines, and cleared all the weeds out from the azaleas around the water garden. We went to Lucca for the day - perfect sunshine and an intense blue sky - and admired the beautiful stained glass in the Duomo, before sitting outside Trattoria Gigi in Piazza del Carmine for a leisurely lunch of pasta and a carafe of house wine. 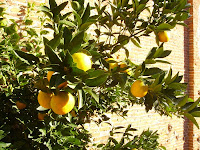 Funghi trifolati (the amantea man was selling enormous porcini the other day, and we loaded up with them)