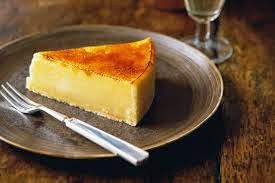 It seems inevitable. Whenever I trumpet a technique as being 'the best way of making...', you can be certain that at some future point I will discover one I think is better. I know I've posted at least two different methods for puff pastry, several years apart, and I'm conscious that I no longer follow the method I described on here for making farmhouse bread (the rising times are shorter, but I now let the flour and most of the water stand for half an hour before first mixing in the yeast - it makes it rise better; the additional step is apparently called 'autolysis'. It works.). In his 'Pedant in the Kitchen', I remember Julian Barnes getting quite aerated on one occasion about the fact that when he rang Jane Grigson ( a  mucker of his wife, so he had the phone number to-hand) to check the detail on one of her recipes he was trying to follow, not only could she not see what his problem was in understanding what she had written, but she further frustrated him by saying airily at the end of the conversation that anyway she 'didn't do it that way any more'. Which I think completely threw him, as the concept of there being more than one way to achieve the desired result was not something he wanted to hear, as he struggled with beating meringue and adding flavouring, or whatever it was, and all he wanted to know was what was 'the right way'. Choice was an undesirable additional that he could do without!
But, the fact is, that all cooks change their minds regularly about their preferred ways of doing things ....sometimes, I suspect, from boredom, and sometimes because they really have found a better way.

Anyway. Lemon Tart. For years, I've been doing it the way I posted on here in 2009 - five years ago! A light lemon-flavoured custard of cream and eggs, set gently inside a pre-cooked shortcrust pastry shell. It is very good....I wouldn't knock it. But this one - recently discovered from Daniel Galmiche's deceptively straightforward Brassierie Cookbook - is better! The appreciative noises around the table at the first mouthful will attest to that. The flavour is intense and edgy, and show-stopping.

For one nine-inch tart (halve the quantities for a 7 inch tart):

1. Roll the pastry to line the tart form, and leave to rest in the fridge for half an hour; heat the oven to 180 degrees C, and bake blind ten minutes with the weights inside and another five without - the pastry should be fully cooked, and biscuity. Reduce the overn temperature to 100 degrees C.

2. Add the sugar to the lemon juice in a small pan, bring to the boil over high heat, then reduce to a low simmer for ten minutes - the quantity should reduce a little over this time. Then, add the grated lime zest and leave to cool, off the heat.

3. Beat the eggs with the cream, and add this to the cool lemon/ugar/lime mixture. Allow to sit for an hour, for the flavours to blend together.

4. Carefully, pour the cream mixture into the tart shell, and bake for approx 45 minutes at 100 degrees C.  Allow to cool before serving. (One additonal option is to sprinkle the surface with icing sugar and brown it briefly with a flame thrower, in order to give the tart a crisp surface; allow to cool once more before serving, if you do this.)

Excellent with vanilla ice cream!
Posted by Pomiane at 14:24 No comments: