.....every day. For instance, the fact that Pappardelle is not available at this time of year. Claudia fixed me with a surprised look, when I asked for some yesterday, and gently informed me - as to a small and slightly backward child - that it is only made during the winter months: e qualcosa inverniale! How could I not have noticed, after all this time? It's obviously one of those slightly odd cultural quirks that

seem entirely without meaning to those from outside, but which firmly position you as somehow ....well......'not quite', if you manage to get it wrong. Like ordering a Cappuccino after midday, for example.... or, in Germany, cutting a potato with a knife (although I'm told that that one's dying out, and only dowagers of an exalted vintage would now be noticeably shocked by this solecism), or, in northern countries, ploughing straight into a glass of wine without first carefully catching the eye of every person sitting around the table before even raising your glass to your lips, or, in Japan, slurping your soup but not slurping your noodles....The list is endless, and the pitfalls ubiquitous!

Still, I'm lucky I didn't make the Pappardelle faux pas several years ago when Claudia's father was still running the show. He already had his doubts that anybody foreign could possibly know how to cook pasta - and explained the process to me carefully, on more than one occasion, and in words of one syllable - and had I blotted my copybook to the extent of asking for Pappardelle out of season, I suspect he would have concluded I shouldn't be allowed to roam the streets in possession of pasta of any kind, and would carefully have relieved me of the same, before summoning assistance!

Squid with Peas and Tomatoes

Veal Burgers, with Red Pepper and Onion, with Fagiolini

Fig and Quince Tarts
Posted by Pomiane at 14:24 3 comments:

You need a soft-leafed lettuce for this recipe, but something which has a nice dense heart. A Butterhead does very well. Kos is the wrong shape, and too woody, and Icebergs are both too crisp, and anyway completely lacking in flavour (I don't quite see the point of iceberg lettuce, I have to confess...)

2. Bring a large pan of generously salted water to the boil. Once boiling, add the Lettuces - all together if your pan is large enough, otherwise you'll have to do this stage in batches.

3. Blanch the Lettuces for about five minutes, until they have visibly wilted, and they just start to give out that wonderful mineral aroma. As soon as they reach this stage, remove them with a slotted spoon and immediately plunge them into a bowl of iced water.

4. One the Lettuces are cool, remove them from the water, gently squeeze them dry and put into a colander to drain thoroughly.

5. Heat the Oil and Butter together in a small saucepan, then saute the Lardons until they begin to brown. Finely dice both the Carrot and the Celery and add these to the pan; saute gently for a further five minutes.

7. Lightly season with Salt & Pepper, then add the Chicken stock to the dish. Cover with foil, and place in the pre-heated oven for half an hour.
Posted by Pomiane at 09:46 3 comments:

This is by way of being a corollary to the post recently about removing the wishbone in order to make life much easier when dealing with poultry. In the same way, this is a brief description of how to fillet a cooked fish, so that you don't have to watch your guests fighting with mouthfuls of bones, and, worse, having to concentrate on the mechanics of rendering their fish bonelessly edible to the detriment of their enjoyment of food, wine and conversation!

The process for a flat fish, like Sole is as follows:

1. With a couple of forks remove the fin edges which run along the sides of the fish, there's little meat in these and a lot of bones. Remove and discard them.

2. Again with two forks, start at the tail end. Push the tines of the forks one left and the other right of the spine and ease the flesh away from the centre. Work towards the head, pushing the fillets to the edge of the plate until the spine, tail and head are completely exposed.

3. Remove the spine, tail and head - you should be able to do this in one go - and there you are, push the fillets back together and the fish is ready to be served!


For a Bass or similar non-flat fish, proceed as follows:

When the fish is cooked, it makes life easier to transfer it to a large flat hot plate or tray. It also helps to have a plate for the bones you remove.

1. Remove any fins from the sides, and the dorsal(back) fin by dragging it and any bones attached to it away from the body with the edge of a knife. Put the bones on the debris plate

2. With the fish still on its side, find the join between the upper and lower fillet. If necessary remove a little - or if you prefer all - the skin to find it. Gently run a blunt knife along the join. Slip a knife or pallet knife under the upper fillet and gently ease it off, turning it skin side down. There may be some bones attached to the upper, dorsal edge. Remove them. If the flesh does not come away from the bones easily, the fish could do with a couple more minutes cooking until it does.

3. Run the knife under the lower fillet. More than likely the long rib bones which form the stomach cavity will be attached to this piece when you turn it skin side down. Pick these bones off with the point of a knife or fork. Remove the exposed backbone, head and tail in one piece. Remove the stomach bones as before and check the upper edge for remain dorsal bones.

4. The fillets are now ready for serving. Even if the fillets have cooled, serving them on very hot plates will heat them up again.

My preferred way of cooking Sea Bass, as long as it is very fresh, is merely to make a parcel of baking foil, buttered on the inside, with the fish sealed inside the parcel, and bake it for exactly half an hour in an oven pre-heated to 180 degrees C. This is a method I adapted from Prue Leith, but I don't bother with her addition of fresh rosemary and slices of Lime - completely pointless, in practice. What does work well, though, is to let a large Anchovy fillet fall to pieces in a couple of ounces of butter you have warming gently on the stove, and then spoon this over the fillets once they've been plated. The flavour-hit is excellent!

Risotto of Red Onion and Sage

Fresh Figs in Cointreau, with Vanilla Cream.
Posted by Pomiane at 09:22 2 comments: 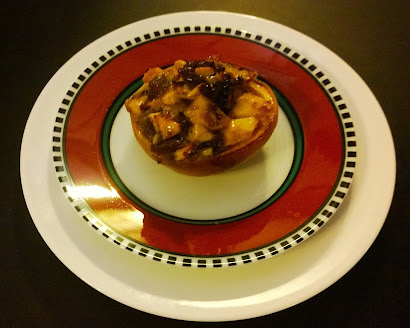 This is a recipe that only works when Peaches are good and ripe, and will come apart easily. I've tried it in London at the wrong time of year with the fruit which are falsely trumpeted as 'Ripe to Eat', and in the process of halving them and removing the flesh have managed to massacre the poor things way beyond any practical possibility of their being 'stuffed' with anything. These days, I wait until Peaches have already been on the market stalls in Cavalca for several weeks before I would even consider revisiting this recipe. It's worth the wait, though!

2. Halve the Peaches and remove and discard the stones. Using a small, sharp knife scoop out as much of the flesh from the Peaches as you can, leaving the skin and a rim of flesh inside it to act as the container for the stuffing. Place the Peach shells in a buttered oven-proof dish.

3. Chop the Peach flesh finely and put into a bowl.

4. Add to the Peach flesh all of the other ingredients except the White Wine and the slivers of Butter. Mix together thoroughly, and fill the Peach shells with this mixture. Top each one with a sliver of Butter and a spoonful of Wine.

5. Bake half an hour in the pre-heated oven.

Serve, either warm or (my preference) once they've been left to go cold. 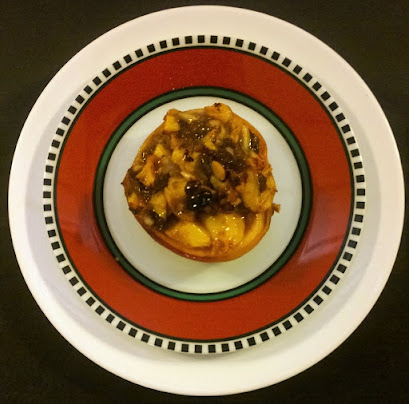