Without question, the acme of all Bread & Butter Puddings!

Panettone texture has a resilience which, in its natural state, can be reminiscent of chewing on lightly baked flannel, but which comes into its own in this kind of recipe; at the same time as absorbing the 'custard' in which it cooks, it avoids disintegrating into a characterless pap (the culinary equivalent of a wet-fish handshake!). The use of cream rather than milk in this dish results in a wonderfully silky unctuousness, and the addition of brown sugar and cinnamon just before baking gives the finished pudding a whole extra degree of sophistication. My personal preference is to include fresh raspberries between the layers of panettone...although you don't have to, and it is delicious even if you leave them out.

Made in individual ramekins, this would be dinner-party standard, and is fantastic served either warm from the oven, or cold, the next day.

Ingredients: 1-cm-thick slices of Panettone, sufficient to make two layers in a baking dish approx 8" x 4" ( I use a Panettone which already contains dried fruit and peel; if you use a plain one, then add a couple of tablespoons of each to the list of ingredients); 2 oz Butter; 2 Eggs; 10 fl oz Cream; 2 oz Sugar (or equivalent volume Splenda); 1 tsp Vanilla Essence; half a cup of fresh Raspberries; generous teaspoon each of ground Cinnamon and Demarara Sugar.

2. Butter one side of the slices of Panettone. Make a single layer of them in the base of a greased (or Trennwaxed) baking dish. Sprinkle with the Raspberries, and with half of the dried fruit and peel, if your Pannetone is the plain variety. Make a second layer with the remaining buttered slices of Panettone (and remaining dried fruit and peel, if appropriate).

3. In a bowl, whisk together the Cream, Eggs, Sugar (or Splenda) and Vanilla Essence. Pour this mixture over the Panettone slices, and leave to stand for half an hour.

4. Just before baking, sprinkle the surface of the pudding with Cinnamon and Demarara Sugar, and then bake in the pre-heated oven for 30 minutes. Allow to cool down for five minutes or so before serving.
Posted by Pomiane at 10:51 1 comment:

I'm not sure how we got round to it - perhaps the fact that we were quaffing a perfectly drinkable Orvieto, which I think had come in at around two euros a bottle - but the conclusion over dinner one evening last week was that it's rare (in fact, almost unheard-of) to come across a duff bottle of Orvieto. And yet with Frascati, that stalwart of cheapo drinks parties since time immemorial, it's practically a game of russian roulette when risking a bottle from a producer that you don't already know.

There's a reason, and it lies in the rules of the formal definitions of the two different win

es.
Orvieto must always be composed predominantly of two grapes - Grechetto and Trebbiano - and the variations thereafter are the result of the presence in varying degrees, and very much in a supporting role, of a few other grape varieties: Malvasia, Drupeggio, Verdello and Canaiolo Bianco. It's a pretty well-defined theme on which subtle variations are invited to be played.

Frascati, on the other hand, is more...um...'relaxed' in the rules it is required to follow. It can be 100% Malvasia Bianca di Candia (but not less than 50%, in any event); it can have a minimum

10% content of Trebbiano Toscana (and not more than 20%) or of Malvasia del Lazio (but not more than 40%)....but doesn't actually have to have any of either; and it can, but doesn't have to, include up to 30% of any mixture you can think of that contains Greco, Trebbiano Giallo, Bellone, and Bombino Bianco ....oh, and to finish it off, you can include up to 15% of any other grape variety you can think of that grows within the Lazio region, if you feel like

bunging it in at the time. With rules like that, I'm surprised they don't also allow a generous percentage of grass cuttings and of chicken feed...or, in fact, thinking of some Frascati's I've experienced in years gone by, perhaps they do... 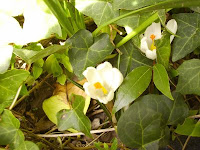 In one fell swoop, the garden has come alive. The climbing hydrangea is sprouting like mad, and at one go we ha 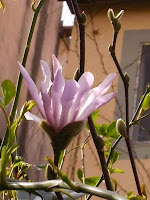 ve the first flowers opening on the magnolias and the vinca minor; timings are all over the place, as the last of the crocus are still opening, at the same time as the leaf buds appear on the persimmmon tree (which I'm sure should be at least a couple of weeks later); the Japanese Camellia is three weeks late coming into flower, but the Rock Cranesbill is already showing its first bloom. As luck would have it, the carpet of Armandii on the south pergola is strutting its stuff, just as we're due t 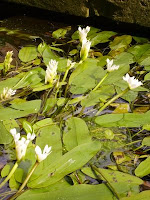 o be away for three weeks, and so it will bloom in unobserved splendour. On the surface of the lily pond, the Water Hawthorn flowers are standing proud, and I expect a mass of them by the time we return. A solitary Hellebore blooms at the foot of the south wall - they ought to do well in this garden, but for some inexplicable reason they don't.

Difficult to feel sad in the middle of so much vibrant new life. R 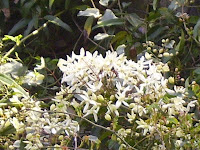 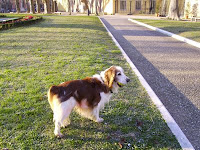 Completely unexpectedly, the senior four-footed died yesterday. So difficult even to write it. An awful, awful gap.

It's the puppy, all those years ago, who got so excited when he discovered that he could burrow right under the china cabinet and emerge somewhere else entirely at the other end (when he got too large to do so, I found the Technical Department considering raising the cabinet on wooden blocks, just so that he could carry on...), and the puppy who used to gallop, ears flapping, through the long grass in Kensington Gardens, for all the world as though he was hunting wildebeest in the Serengeti...
It's the dog who turned out to love music - just like his great-grandmother, apparently - and who would always raise his head and join in with the 'Dies Irae' in Verdi's Requiem (although his absolute favourite was nothing so high-brow, but was actually the signature tune from The Archers!) and whose particular partiality was for strong cheddar and for chicken livers. The dog who, tennis ball firmly in his mouth, would look round and check every so often when we were out for a walk that everybody was present and correct....and who, during the day, would come and find me whatever I was doing, and would curl up on the floor right there, because that was where he was supposed to be.

I shall miss the little pleasure noises he made when he was having a cuddle, or the inside of his ears were being scratched...or that difficult unreachable place right in the middle of his back; I shall miss the polite, Jeevesian woofle - more a throat-clearing than a bark - he made if he felt we were overdue in getting up and getting on with things in the morning, and the way he'd hang around after the junior four-footed had finished his breakfast milk and gone off back to bed, to lean against the fridge door and indicate that a little piece of cheese would really be quite a good idea (and which latterly he always got). I shall miss the din he used to make with his metal drinking bowl - by kicking it against the wall - if ever it was empty and he was thirsty...and the polite way he'd then wait for water to arrive (and the extended kicking and clanging if nothing had happened after several minutes, since obviously we couldn't have heard the first time). I shall miss the sceptical expression on his face when listening to the Today programme in the mornings...nothing to do with anything, of course, but his timing was often uncannily accurate when somebody was talking particular guff. And above all I shall miss those moments when we'd be playing together, and for a second or two he would rest his forehead against my shoulder, and just stay there, completely still; moments of perfect closeness.

Yesterday morning, he went in for what we thought should have been a fairly routine piece of surgery, but when the vet looked inside, he found a tumour so aggressive that he said we shouldn't bring him round from the anaesthetic, but should just let him carry on sleeping peacefully. He hadn't been in pain at any point, and so the best thing we could do was to let him go. Which we owed it to him to do...

And so, he sleeps on. Hunting wildebeest in the Serengeti, in his dreams. Ears flapping, as he gallops onward through the long grass... 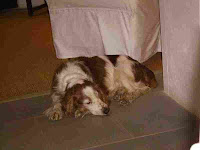