Genoa is magical. At this time of year, magically empty of foreigners, as well...And the resident groups either of local students or of Senegalese selling umbrellas could have been photo-shopped in from any street scene in Pisa! We had the Villa Doria entirely to ourselves at the end of Tuesday afternoon, as dusk deepened outside, and lamplight gleamed indoors on the rich colours of  renaissance tapestries, with shadows playing up into the recesses of carved and coffered ceilings.  From the shelter of the loggia, we watched the rain lash the black and white tiles of the terrace beyond...

The  Centro Storico  is thronged with centuries of other people's memories, from the Knights Hospitallers in their commanderie which, eight hundred years ago, faced onto the bustle of Genoa's medieval port (but which, unfortunately, these days, abuts instead the elevated highway which blights every part of the Genovese seafront) to the  fantasy palaces of the seventeenth century nobility, to the stolidity of the nineteenth century bourgoisie. To walk through the Old Town is to glimpse, through open doorways to left and right, the sort of architectural cappriccios which improbably adorn the ceilings of baroque churches the length and breadth of Europe....a noble staircase, sweeping up to a balustraded gallery, with, beyond that , a glimpsed pillared courtyard...often with a fountain or some orange trees, and then beyond again, a screen of columns, and another staircase  rising again to some further, unseen, terrace above....and the sky distantly visible through and above this towering confection of fluting and balustrades and  noble elegance. From high above, lofty vaulted porticoes look down, their aristocratic occupants having wandered off only five minutes before...

Over two days, we ploughed steadfastly, umbrella-wielding, down twisting medieval alleys, from one twelth century church to the next, dripping generously wherever we arrived, and never quite staying long enough in one place to dry out properly before we were out in the rain once more. We dripped over the floors of San Matteo, the original Doria family church, and of the Cathedral of San Lorenzo (and even had the the opportunity to drip quite separately over the floors of the cloister and the museum of SL, since it involved a walk of several hundred metres from the main church) and finally, over the floors of Santa Maria di Castello....which threatened to be a bit of a disappointment, until one discovered the sacristy, and beyond that, some steps up to one cloister (with a rainswept view, right down to the harbour), and then more steps up to a second one, planted with orange trees, and then yet more steps winding up through the monastery complex behind the main part of the church.

And we didn't so much drip over the floors of the Palazzo Rosso and the Palazzo Bianco as 'puddle' (if there is such a verb)  as we sought sanctuary from the thunderous deluge that threatened to turn  Via Garibaldi into a river, with us wading ankle-deep through the middle of it. An afternoon of pictures, with the prized possessions of the City Fathers on display over the two upper floors of each of these Palazzi, and a dash (through the rain) across the back garden of the Palazzo Bianco and the back garden of the Palazzo Tursi, to see yet more of the City Fathers' prized canvases, not to mention their prized collection of ligurian blue and white apothecary jars, and all topped off by a room (the wonderfully named Sala Paganiniana) devoted predominantly to Paganini's two favourite violins. Some of the pictures were good. A lot were not. A

Pisanello portrait of a muscovite gentleman, I would happily have pocketed, and there were some rather unexpected Van Dyck's, as well as a Filippino Lippi, which has pride of place in Palazzo Bianco (not my choice for pocketing, though - I've never liked Lippi junior, and this one forcefully reminded me of his frescoes in the Strozzi chapel at Santa Maria Novella,  which I loathe). Other than that, there's an awful lot of ho-hum and 'school of...'.

They have a system, in these galleries, whereby, rather than have a guard posted in each room, there are a number of them, mostly women in black,  who 'float', and who meander from room to room in an apparently aimless fashion in the wake of visitors to the place, just in case anybody, unobserved,  might feel like pocketing anything on their way through (the Pisanello muscovite gentleman being a case in point). In general, the system probably works reasonably well....except, on this occasion, when it was time to leave the Palazzo Rosso and go over the road to Palazzo Bianco, there was no sign of the Technical Department, who had last been seen on the second floor, peering at a Cuyp portrait of rabbits. Rounding up TD when it's 'time to leave' is one of those things one gets used to in life...generally, I find myself scouring the aisles of B&Q or Esselenga, getting increasingly irritated and 'scouring' at increasing pace as he is nowhere to be seen. And so it was on the second floor of Palazzo Rosso, as I went round, several times, from the Van Dycks, to the portraits of the doges, past a whole lot of rather iffy dutch skating pictures, through the blue bedroom, and the striped bedroom, and back again, and round again, and re-tracd my steps (all without success, and all at an increasing rate of knots) ...all before I realised I had a whole train of middle aged 'women-in-black' all trying to trail me at a discreet meander, and all of them desperately out-of-puff and in various states of distress as a result. I smiled vaguely at them, gave up my search, and made my way to the ground floor, where the TD was to be found after all,  standing in wait beside the umbrella stand. Dripping.

We dripped our way also into a good number of bars, for reviving cups of coffee and glasses of something nourishing, along the way...a starkly modern place in the bowels of the Palazzo Reale in Via Balbi, for a very good ligurian white; somewhere basic (very friendly, but with signs on the wall announcing that, after ten in the evening,  drinks would be only be served in plastic glasses....which said much about the clientele) in the backstreets of Castello; opposite the Duomo, a smart cafe, with impressively polished intonaco veneziano; a bar up near the station which got the prize for the most unspeakably awful bar-artwork anywhere, ever...but the coffee was pretty good; and, best of all, Baribaldi, just opposite the Palazzo Bianco, where we quaffed prosecco and feasted much more than was sensible on pastries and sandwiches that continuously appeared as if from nowhere, and could probably quite happily have dug ourselves in for the entire evening, had we not had to be somewhere else.

And the 'somewhere elses' in Genoa are pretty good, too. You go for the fish....and you do not go in vain! The menu is almost the same everywhere: stoccafisso, cooked in various ways; and trofie di pesto (with potatoes and beans); and pansotti, with salsa di noci; and antipasto of mussels (deep-fried, or steamed, or in sauce), and of raw tuna, and  of octopus, and of anchovies in vinegar...and deep-fried fishy flavour bombs, and if you're lucky (we were) capon magro alla gelantina. I believe all of the restaurants had dessert menus as well, but we never actually managed to get that far...the rest of what was on offer was far too good to turn down, along the way. The best restaurants of all were Trattoria Vegia Zena, in Vico del Serriglio (never, anywhere, ever, have I tasted better mussels...) and the Antica Osteria Vico Palla, just at the end of the old harbour. It would have been worth the entire trip just to have eaten in one or other of those two places. Spectacularly good!

A final jog-trot through the Palazzo Reale,  and then we were back on the train, heading for Tuscany and home. And as we did so, the sun came out. 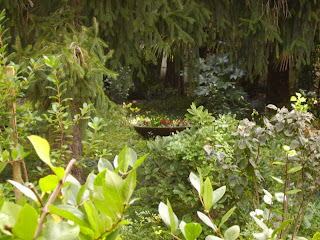 Heavy-duty gardening. Non-gardeners (Paolo, for instance, who looked surprised, the other week, when I moaned about the current gardening workload, and asked what on earth there could be to do in a garden at this time of year) seem to think that outside summer months the garden is just left dormant, effectively in mothballs until the first green shoots of spring. Gardeners, on the other hand, know all too well that it's at this time of year that all the heavy-duty stuff needs to get done: planting, and transplanting, and pruning, and building, and any structural changes that have suggested themselves as a possible good idea in the course of the warm months of the year. And so it has been. Bulb-planting: alliums, and narcissi, and tulips....about five hundred of the things, in total. Extending the flowerbeds, under the citrus trees, in order to divide and re-plant what turned out to be around sixty agapanthus, and along the west side of the new pergola, equally to plant newly-divided hemerocallis, dieries bicolore, and ornithogalums, and to make a new bed for a disparate bunch of hitherto slightly 'beached' roses from elsewhere around the garden. New hydrangeas (various quercifolias, paniculatas, and a macrophylla variegata), to go behind the church, and to line some of the paths under the pine trees. Groundcover planting (mazus reptans, veronica spicata, and isotoma fluviatilis...about fifty of each) to fill in the area by the entrance walkway, around the camellias and beneath the white lilacs.  And, the new pergola... 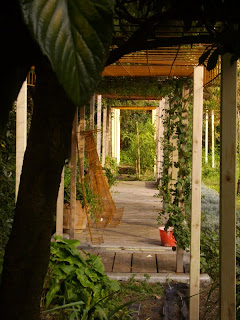 Finally, the new pergola is being erected around three sides of the north lawn....and, in theory, also to extend along the east and south sides of the south lawn...although I'm currently so happy that any of it is happening, that it feels like asking for too much actually to get the whole thing completed in one go! 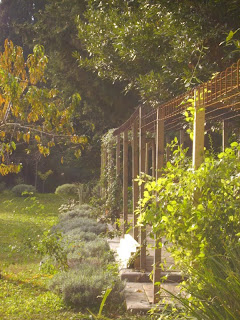 Giancarlo and his sidekick (who's name I don't actually know) fall through the gate each weekday morning at around 10.00, and then spend the day bumbling around, trampling things underfoot, and breaking things (ladders, generally), and using angle grinders and welding kit (which make a lot of noise and sparks, and presumably serve some useful purpose) and slowly, section by section, the pergola takes shape around the garden. The TD regards them with a sceptical air, thinking that it's best to leave them to get on with it undisturbed, but opines that it's like being invaded by a combination of the keystone cops and those two opinionated old buffers from The Muppets. 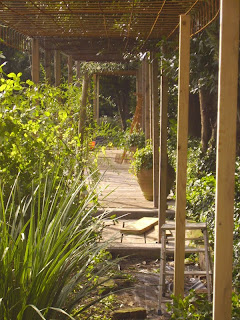 Of course, like all such things, it's a matter of pulling on a thread. Now that we can start to see what the garden will look like with its pergola-cloister, I'm starting to think of replacing all of the outer part of the north lawn, between the fruit trees and the borders, with summer-flowering groundcover...a rough calculation suggests that around a thousand plants should suffice.  But that's a job for next autumn...the dance-card is already full for this year!

Terrine of Quail and Apricot.

Fried Pork Chops, stuffed with cheese and prosciutto; sauté of onions and courgettes