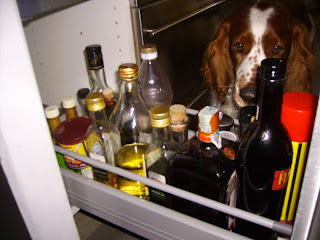 ...has been moving things around in my store-cupboards. I suppose it could have been me, but the jury's out on that one. In any event, the upshot was a unintended culinary experiment at the end of last night's dinner.
I and the four-footeds had collected the Technical Dept from the airport, where he'd flown in on the last flight from London. The four-footeds are keen on the airport - lots of interesting people to investigate, and things happening, and generally they're so engrossed in it all (and, inevitably, facing the wrong way at the appropriate moment) that when whoever it is they've come to meet actually arrives, they take only vague notice, as they peer past them at some deeply intriguing bit of airport flotsam.

We'd got home. The mustard-coated lamb had gone into the Mrs-Kafka-Hotter-than-Hades oven, as I gently re-heated ratatouille, and got on with Fettucine Alfredo. A half a bottle of merlot later, and it was time to address dessert: zabaglione (to which the TD is quite partial). Four egg yolks, a quarter of a cup of sugar, half a cup of marsala, and about five minutes with a hand whisk, over medium heat, in a simmertopf. Nothing could be more straightforward, and, since I've done it a million or so times before, something  I can do in my sleep. Or so I thought.

The marsala bottle I have on the go (not to be confused with the bottles in store in the pantry, for future use) lives in the bottom of the pull-out to the left of the hob, where all of the heavy bottles live which are on-call for use on a regular basis: cointreau, vinegars, flavoured oils...that sort of thing. The Marsala bottle lives at the front of the pull-out, and is distinct from all its neighbours by being tall, with a long neck, and a screw top. So, of course, I don't need to read the label on the bottle when I reach for it, but merely measure out the appropriate quantity from inside, and return the bottle to the cupboard.

Which is what I did. And it was only as I was about to pour the dense and frothy zabaglione into the waiting glasses, several minutes later, that the synapses snapped into action, and I made the connection between the elusive aroma that had been bothering me as I whisked, and the fact that the newish bottle of balsamic vinegar in the pull-out also has a long neck and a screw top. Which I checked, immediately. Only to discover the marsala bottle, untouched, and mysteriously not in its usual place but instead nestling innocently at the back of the cupboard, next to the lime oil.

History is full of instances of amazing discoveries which have happened by accident: Marconi and his spilled acid, for example, or the accidental discovery of saccharin. I can report here that the use of balsamic vinegar in zabaglione does not rank amongst these. Put quite simply, the end result is disgusting. "Try adding some sugar", counselled the TD. So I did...and the result was still disgusting. Worthy only of the drain. Which is where it was swiftly despatched.

Pears, poached in sauternes and served chilled.
Posted by Pomiane at 10:34 1 comment:

This is so straightforward, it isn't even worth writing out as a recipe. Simply peel and cut up the celeriac, then cook in salted water until tender, exactly as you would for potatoes. Drain, and puree in the food processor. A few minutes before you're ready to serve it, re-heat gently in a saucepan in which you've melted a generous amount of butter (about an oz per serving) and thoroughly mix in a heaped teaspoon of tapenade. That's it. The tapenade gives an edge and some complexity which the celeriac otherwise lacks - I find celeriac purée tends to be delicious at first bite, but by the third mouthful, it's definitely getting a bit 'samey'.
We had this last night along with a simple dish of grilled lamb cutlets, but it would go well with practically any roast, or could form an interesting base for croquettes (mixed with cheese or minced chicken, for example.)


Tonight's dinner:
Artichoke 'Fonds' stuffed with pork and parmesan.
Fiorentina, with parmesan and rocket.
Baked lemon cream, with blackberries.
Posted by Pomiane at 11:06 No comments: