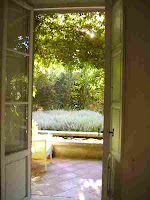 This week, it has been almost too hot even to give any thought to food...and the only way to make sense of the day, before being pole-axed by the temperature, is to make a very early start, in order to cross at least one or two things off the to-do list before it all becomes too much to contemplate.

Town is empty, and every day is Sunday. Shopping streets are shuttered - many of them for their entire length - and 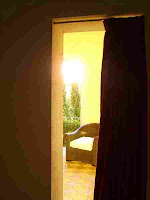 silent. 'Chiuso per Ferie' notices decorate the barred doors of restaurants, shops, and even the pharmacy opposite the end of Via San Francesco. The normal early morning stillness remains unbroken by the usual sounds of Pisa coming to life - apart from the occasional noise from a strimmer, in the hands of one of the few people who haven't departed for the coast or the mountains - and even the birds don't seem to make their usual clamour in the still heat of the day. 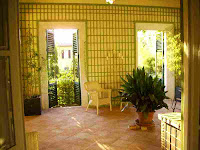 Early mornings, though, are magical. At this time of year we leave all the french windows wide open at night, to encourage whatever breath of night air there might be to infiltrate the house...and coming downstairs first thing in the morning is to be greeted by the freshness of the morning air, and a soft sunlight that permeates the garden as the rays first creep in over the top of the wall fro 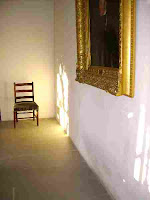 m the Palazzo Ruschi. The angle of the sun at that time throws unexpectedly intense shafts of sunlight into rooms which are normally entirely in the shade, and the Loggia, on the first floor is silently flooded with sunlight at seven in the morning...

It's too hot for formality, and so we graze over the course of the day - the fridge is well-supplied with prosciutto and salami and truckles of various kinds of pecorino - and lunchtime is identifiable only by the glasses of Kir which materialise sometime around one o'clock. As the sun goes down and the evenin 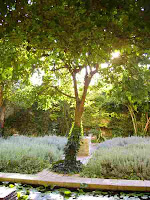 g shadows lengthen, chilled prosecco is served, and eventually - by around 9.30 - it seems practical at last to think about supper...

Which is generally followed by a glass or so of grappa, sitting by candlelight on the terrace, and watching the brilliance of the moon as it moves inexorably across a cloudless night sky. En route to bed, the candles are blown out, but left where they are to be taken indoors again first thing in the morning. Da Capo...

Carpaccio of Veal, with rocket and parmesan

Crêpes Suzette
Posted by Pomiane at 16:40 No comments: