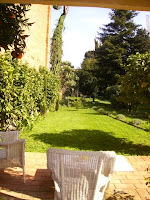 ...and summer has arrived, in the meantime. The garden has burst into leaf, and the sun, as we sat on the terrace for coffee this morning was almost too hot for comfort. Bliss! 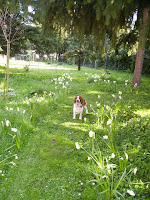 The week away was pretty busy. In all, more planes, and trains, and airports and stations than is desirable in such a short time.  "This" muttered the Technical Department, half way through the Great Trek from the ticket hall to Platform 28 in Rome Central Station "is like the hiking holiday from hell, interspersed with a few short spells on aeroplanes". He had a point. Much of the week seemed to be spent lugging bags to gate 110 at Gatwick North, or gate D87 at Schipol, or some out-of-the-way platform at the railway station in central Amsterdam. And ending up being diverted to Bologna on Thursday morning, when Pisa was closed for incoming flights due to fog! These things are sent to try us...
It wasn't all bad...dinner at the Garrick on Monday evening was memorable (thanks, Richard!), and on Wednesday evening, as we dined very well in the restaurant in the Muziekgebouw, looking through the windows at the rain-swept Amsterdam docks. 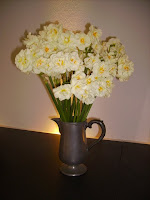 It's good to be home, though. And I think the four-footeds agree, as they work on demolishing the groups of narcissi which have appeared gloriously beneath the pine trees. Each casualty is added to those which have gone before, in a pewter jug in the kitchen....I might have to graduate to a bucket, at this rate! Dogs and highly-manicured gardens? Forget it!
Tonight's dinner:
Ravioli of lamb and parmesan, in a leek and tomato sauce. (Re-cyled from last night's main course, when our new friends from Via Carducci came to supper)
Grilled lamb chops with green beans (yes, I know - lamb, and lamb....but cooked so differently that I don't think it matters)
Limoncello panna cotta, with fresh blackberries.
Posted by Pomiane at 10:57 No comments:

Completely different from the usual method for soufflé base, this version comes from Gaston Le Notre ( the late, and very great), and is one of the 'basic' recipes to be found at the front of the wonderful pâtisserie book he published in the seventies. The flour-to-milk ratio is very much higher than I've  found anywhere else, and in fact the process is more akin to making choux pastry than to making a custard. The result is much more robust than a soufflé made using a creme patissiere base - although not noticeably denser in texture, to the palate of the unwary diner - and will make the journey from oven to table with much less risk of deflating en route. Casting around, I find that the identical approach was suggested by Madame Saint-Ange, when she was publishing recipes around the end of the 1920's...so Le Notre wasn't making it up!
The first time I tried this method, it was a disaster, and the soufflé came out with the density of a pudding. I was tempted to think the method was wrong, but decided that it was worth trying again, on the basis that Le Notre was a fantastic technician, and it made no sense that he would have been advocating a process that didn't work. The trick is at the 'boiling' stage (see below); if you cook the flour too much, it produces a dense cowpat of stodge that will resist any attempt to rise in the oven. When I tried it again, and was much more careful, the result was perfect ....as it has been every time subsequently.
For enough soufflé base for two individual sweet  soufflés: half a cup of milk, 30g Sugar, 22g Flour, 2 medium Eggs, 10g Butter.
Method
1. In a bowl mix the Flour and Sugar with about 3 tbs of the Milk.
2. In a saucepan, bring the remaining milk to the boil, add it to the Flour/Sugar/Milk mix and stir well, then return all to the saucepan.
3. Stirring vigourously with a whisk, bring the mixture to the boil, and cook until it visibly thiskens - probably about thirty seconds. Remove from the heat, stirring for a further ten seconds or so, then add to this the Butter; cover the pan with a lid, and leave for ten minutes.
4. After ten minutes whisk the melted Butter into the base, along with the 2 Egg yolks.
5. Add whatever flavouring ingredient you want to the base, and leave to one side until time to cook the soufflés; then whisk the egg whites and fold in as usual.
6. Cook the soufflés in a 180 degree C oven for fifteen minutes (no need to use a bain marie with this method)
Serve.
Posted by Pomiane at 10:59 No comments: