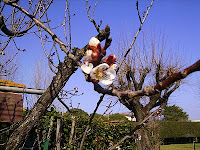 The almond blossom is well-advanced, with the plum, apricot and cherry trees following close behind. A week of blue skies and shirtsleeve gardening weather...even spending time weeding, which isn't normally a task I face with any enthusiasm. Several hundred lampicione bulbs have been planted in the wooded area behind the church, and although our sortie in search of escallonia plants yesterday was unsuccessful, we returned from it (inevitably, I suppose) with a car filled with a couple of rather fine Lonicera shrubs, and a Chaenomeles 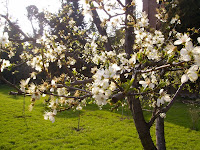 ...I didn't know they came in white, and this one is perfect for the bed beside the workshop, which it now shares with a couple of white (gumbo) azaleas, a white wisteria and a prostrate cypress bush. Otherwise, the warm weather has produced carpets of flowers throughout the garden - gentians in 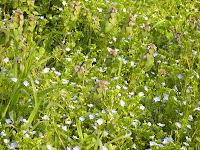 the open areas, and masses of deep-coloured violets under the pine trees.

To Lucca at the weekend, for dinner with the Brancolis. They have a constrained timetable at the moment, as their house-cat was shot in the face recently (the joys of country living), and they're currently on a rather complicated timetable, providing multiple daily medications while keeping fingers crossed that the feline four-footed recovers as much as possible. We ate at Da Leo, a regular haunt from years ago, but which has rather fallen off the radar more recently; sadly, Gigi, the wonderful trattoria near the veget

able market has been ruined by a rave review in the New York Times (!) and these days the market workers have been elbowed aside by throngs of american tourists. Sic gloria transit.
Still, restaurant news isn't all bad, as I see that Bruno Loubet has returned from down under, and is now to be found at a new bistrot in Clerkenwell. I'm not sure when next we're due to be in London, but it's one for the diary as soon as we are.

The famous welsh slate for the kitchen work surfaces in the new house is due to arrive either today or tomorrow - certainly, it is already in Florence, and just needs to travel the length of the Fi-Pi-Li to get here - and after that, I suppose we can start the process of moving in. Fortunately, we don't have to rush, and can take several weeks doing so; small things first, and working our way up in size until we concede defeat and call in some proper removers for things like beds and wardrobes. Stress-free it won't be, is something one can say with absolute confidence...

Tonight's dinner (almost a picnic, as we're going into the new house to seal terracotta floors after the brazilians have finished for the day, and will trail back for dinner only late in the evening):

Apple Soufflés
Posted by Pomiane at 09:29 No comments: