so far, is being a month of the elements. It began at three a.m. on the 1st, when I was woken by the sound of rain drumming on the roof overhead, and (sighing) I pushed the bedcovers back in order to go and do the usual. Which, when the rain sounds like that, means having to go downstairs in order firstly to lift the rug in the Tinello, and then to see that there are rolled towels along the bottom of the french windows in the Pranzo. Whichever idiot it was who was in charge of works when they last renovated this house was clever enough to direct all of the drainage from the rooftops of the house, the Teatro Lux next door, and the whole of the southern aspect of the church (probably a couple of acres of rooftop, all-told) into one solitary drain, leading from our courtyard; and if that wasn't enough, they then concreted the entire courtyard, thus making it into an impermeable basin. The combined effect is that when - as happens perhaps half a dozen times a year - we get the sort of intense downpour which reminds us that Pisa is in fact only a couple of miles inland, and so prone to marine squalls, then the volume of water is too much for the drain to deal with, and so... it doesn't. Instead, it backs up, the courtyard fills with water with impressive speed (normally, once it has started to back-up, then within ten minutes the entire place is under about a foot of water, and rising), and water starts to come up through the Tinello floor. I'm never quite sure why the latter happens, but it isn't a big deal; generally, a couple of minutes with a mop and bucket is enough to deal with it, and once the floor is dry once more then the rug goes back into place.

On these occasions, almost invariably worst case is that the water level rises in the courtyard sufficiently to lap the sills of the french windows - a foot above ground, and so not too vulnerable - before the squall passes, and the water disappears again almost as quickly as it appeared in the first place. On one occasion, it started to soak in, through the towels, and all looked a bit worrying, before the rain receded, and the water-level dropped once more - and once, when we were away, in London, water had clearly swept in, throughout the ground floor, and rather dramatically caused a low-lying transformer behind one of the kitchen cupboards to blow, leaving the house without power for a couple of days. Luckily, on that occasion, Olga had come in and dealt with all of the clean-up operation before we returned, and we could subsequently only guess at the impressive nature of the event from finding leaves and other debris from the courtyard in obscure parts of the ground floor over the following weeks. That, and the mangled remains of the exploded transformer, of course.

I expected this time to be no different from others. The rain drummed down, I dealt with the rug and the towels...while the storm got markedly worse, with almost constant crashes of thunder and lightning, and the harsher intermittent sound of hailstones bouncing up from the ground outside and ricocheting against the windows. If anything, the rain got more intense, and the water level was already up to the sills. TD was present by then, and between us we gathered every towel in the house, to increase the defence blockade as best we could. At which point, the water started to flow in under the left-hand french window in the Pranzo, and although I tried to hold towels in place against it, the force was too strong, and in seconds water was flowing in and cascading down onto the Pranzo floor like a miniature version of Niagara. Gallons and gallons per minute. Rapidly, we decided to abandon the Pranzo, and made a dam of towels across the bottom of the doorway into the kitchen, to contain the water in the Pranzo (if possible). TD then realised that water was also cascading from the courtyard into the Pantry, and so he rushed off to do the same across the doorway from the Pantry into the Scullery - even the four-footed's bed had been called into action by that point, and was sacrificed to the greater good as part of the dam structure. He didn't mind at all, as he was finding the whole event quite exciting, until he got shouted at for getting underfoot as I was lifting the dining chairs out of the water to put them on top of the table, after which he retreated to a far corner of the kitchen, to watch events from a distance, in cautious silence.

And so, the storm passed on, the rain stopped, the thunder and lightning faded into the distance...and the Pranzo was two inches and more under a sheet of water, which reflected the lights from the display cabinets rather prettily, I thought, with reflections of the glass and porcelain inside them, and reflected light shimmered up across the ceiling beams as I waded through the water and started to bale. TD was dealing in the distance with the flood at that end of the house - the Cantina was at least six inches underwater, he reported later - and he got the technological benefit of using the karcher to suck water up by the gallon before depositing it down the sink in the lavanderia, while I baled out the lake in the Pranzo by the age-old expedient of mopping it up with towels and a bucket. Eighteen towel-loads wrung out equalled one bucket-full, to be emptied into the kitchen sink, and then another eighteen, and then another eighteen, and then another eighteen, and then....you get the idea. I think it was after about the fifteenth or eighteenth bucket that I actually began to see little islands of tile appearing here and there above the surface of the water; and then the little islands became an archipelago; and then, it was a floor with puddles on it, rather than vice versa.....and eventually, I was able to remove the towels from the doorway, and (sort of) declare victory.

By the time it was fully light, the house was damp, but no longer flooded, tea had been made, and TD retreated to bed once more, mug of tea in hand, while four-footed and I  regarded each other somewhat balefully, and decided to get on with the day.

So, that was element number one: Water.

Element number two would have to be Earth. The storm gave way to a week or ten days of gloriously sunny weather, perfect for gardening, and the start of the chores I'd lined up for winter. I extended the beds at the top of the North Lawn, to allow for division and replanting of bearded irises, as well as a whole lot of Munstead Lavenders to go in, and I put four new hydrangeas under the edge of the pergola (Kokonoe Tama, Anthony Bullivant, Merveille Sanguine, and Paniculata Sundae Fraise); at the other end of the garden, I put in a couple of hundred flagged iris bulbs (Hildegard - a pale blue, to mix in with the Purple Sensation already there from last year), and added an Indigofera Gerardiana and a Loropetalum to the shrubbery, and replanted a whole lot of bergenias which looked in need of a less sunny spot before next summer;   then, I cleared out the area under the Camellia grove at the end of the agrumi lawn, added a couple more camellias (blush pinks, but nameless) to take the grove down to the edge of the lavender path, and transplanted about fifty ajuga plants from the lower shrubbery, and mixed them in with about forty tiarellas, which I hope will spread to become dense underplanting beneath the Camellias as they mature. Finally, before the weather broke, I planted ten new bamboo plants (phyllostachys bissettii) along the southern perimeter of the garden, which should become a dense screen within a year or two, and shield us from the increased noise and activity that seems inevitable now that the Seminary has handed the pavilion over the the Scouts for their future use.

Loads of earth was involved....wet and rich and dark...and most of it seemingly attached to the four-footed's paws. (I don't understand why it is that the cats, who also come and watch as I work, remain as clean and unsullied at the end as they were at the outset). Four-footed loves gardening, and always joins in enthusiastically, before managing to carry much of the garden back indoors with him again, about his person. Which he knows he does, and by the time I catch up with him, I invariably  find he has already put himself in the bath and is patiently waiting for the water to be turned on and for his paws and tummy to be washed and dried. Actually, he isn't merely 'waiting', since he loves the process almost more than anything else, and the expression on his face as he sits in the bath is a mixture of anticipation and accusation, as though daring me to say that he doesn't on this occasion actually need a bath.

So, plenty of Earth, as element number two.

The Poles turned up, two days ago, and with minimal fuss and chaos, installed the stovepipe for the wood stove in the kitchen, which has stood there for the past two years merely as a decorative object, while we summoned up the courage to initiate a process of making holes through walls and roofs in order to render the thing operational. As the choices seemed to be either GianCarlo or the Brazilians, our hesitation was entirely understandable. In either case, the process would have resulted in the whole house being  shrouded in dust and clogged with rubble, with who knows what irreperable damage to life and property along the way. Enter Kristoff and his team, and the work was carried out with so little disturbance you'd barely know they'd been there (under the careful and meticulous guidance of the TD, I must add...Kristoff initially appeared to have some ideas of his own about how it should be done, and was firmly but politely put right back on track by the TD - and kept there - with results as indicated). In drilling up through a 40 cm wall, to emerge on the other side of the wall and one floor up, and then to make a hole through the roof exactly the size to accommodate the stovepipe, the Poles made less mess than the four-footed manages on any standard gardening afternoon. And they didn't even jump in the bath and look accusing straight afterwards!

And so, for the past two evenings, the kitchen has been truly home-and-hearth-like, with flames dancing exactly as ordered, and all well with the World. 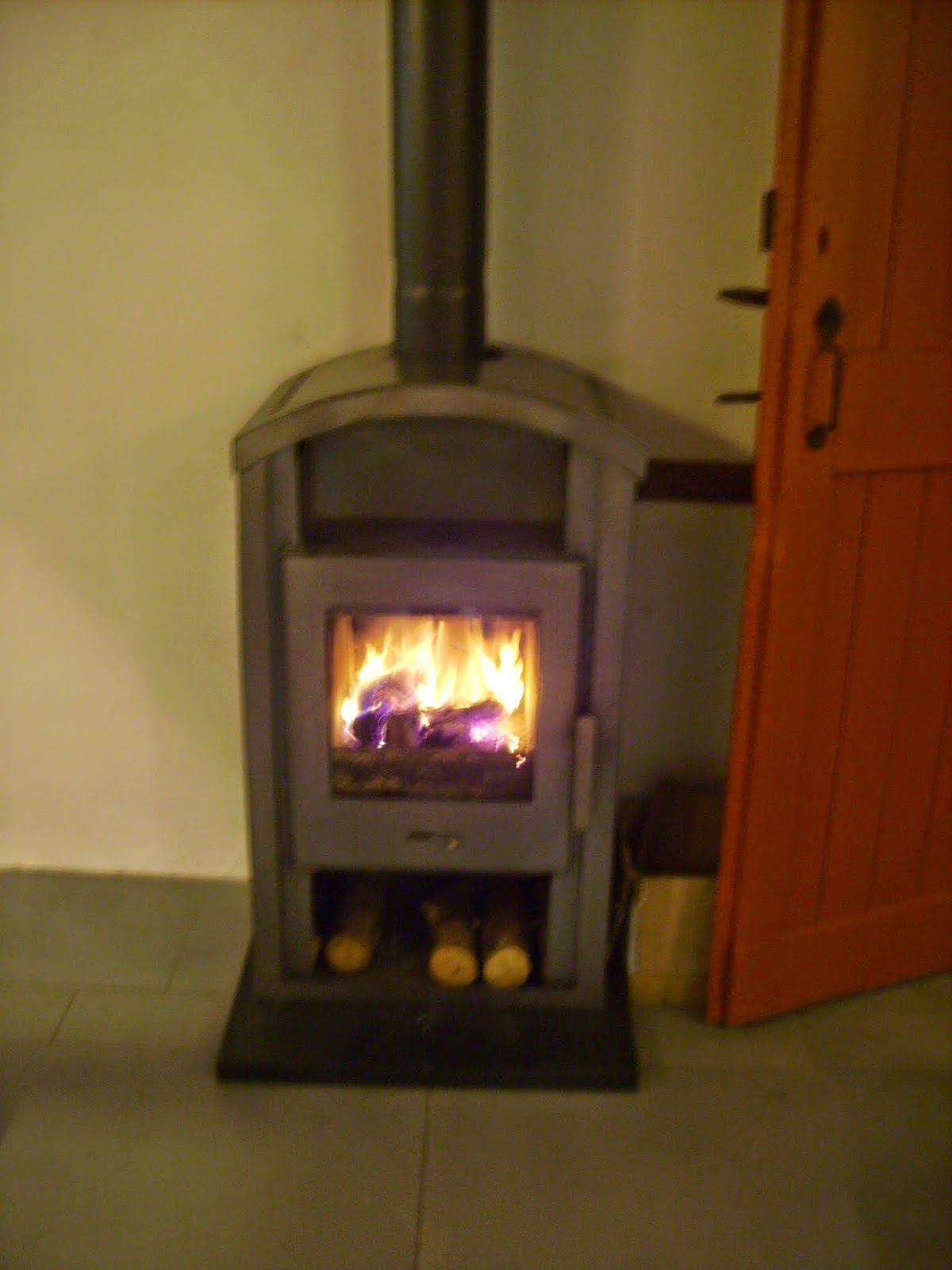 So by my reckoning, the only element still lacking for the month is Wind - and doubtless Christmas will take care of that! (Later note - it did, but not in the way expected...we had a gale on the day after Boxing Day, and the Christmas tree, out in the barn, blew over rather dramatically in the middle of a tremendous downpour...uprighted subsequently, it resembled a slightly drunken actress, unsteady onher pins, for the remainder of the Christmas period).

Tonight's dinner (post flight - we're about to leave for the airport):

Apples baked in Cream, Brown Sugar and Cinnamon
Posted by Pomiane at 07:58 No comments: