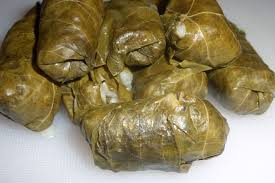 This was one of my offerings in our recent Masterchef Weekend (2017). Not the greek version, of very long memory, but one from Spain, with a much more interesting flavour than the lemon and rice one, which IMHO has always seemed rather one-note-ish (and that a rather brackish flavour, which could be lemon or could be vinegar, but either way is an acquired taste rather than an obvious argument). The spanish version uses a mixture of  varieties of meat in the stuffing, and is cooked in a light tomato sauce.
Most recipes specify vine leaves which have been preserved in brine, which are generally available, but with a garden full of fresh vine leaves for around ten months of the year, it seemed daft not to use them, and so, I did. It was a toss-up between leaves from the muscat vine, or from the fragola vine - the latter were larger, and seemed more robust, and so the first time I did this recipe, I used these - in practice, the smaller leaves are just as strong, and arguably more tender. I suspect the larger and tougher the leaves are, then the longer you have to blanch them in order to get rid of any residual leatheriness.
This is a peasant dish, and so although I've given precise quantities of ingredients here, I imagine it's really one of those dishes where you use whatever you have, in what seem like sensible amounts. One of those dishes where an Eliza Acton or a Hannah Glasse would have said merely 'mix together a quantity of the following things...' and then proceed to list anything and everything which might be included.
Good served either hot or cold. We have now - rather early for the year - entered deep summer, and so cold food is the obvious choice: chilled food and chilled wine, served late in the evening, as the temperature comes down to a beautiful softness.  Served hot, as a winter appetiser, though, this would be equally good, near a blazing fire.

Ingredients: 16 vine leaves (either fresh, or in brine); 250g veal; 1 cup chopped cooked ham; 1 chicken breast, skinless & boneless; 2 tbs minced parsley; 2 large garlic cloves, minced; 2 slices bread, crusts removed, and soaked in a little milk; half a cup tomato sauce (simmer a can of tinned tomatoes in a little oil for fifteen minutes or so, until all has thickened and resolved itself into sauce texture, then seasoned as appropriate); half a cup chicken stock.

1. If the vine leaves are fresh, blanch them in lots  of boiling water for about five minutes, then refresh in cold water, then lay them between tea towels to dry. (I suspect you do much the same if they're in brine, but I imagine it would tell you in the jar).

2. Process all the rest of the ingredients (apart from the tomato sauce and all but 4 tbs of the stock), taste, and season as appropriate.

3. Fill each leaf with a couple of tbs of filling, then roll it up as if for a spring roll (i.e. tuck the bottom of the leaf nearest you over the filling, then fold in the sides, and roll it up, away from you).

4. Put the remaining stock and the tomato sauce in the bottom of a pan (one with a lid) and place the stuffed leaves in one layer on top, seams facing down, and quite tightly packed. Cover the pan and simmer for about half an hour, over low heat. Serve, with the sauce from the pan spooned over.

If to be served cold, cover and leave in the fridge for at least a few hours beforehand.
Posted by Pomiane at 07:13 No comments: