This is lazy cooking at its best - no more than five minutes prep beforehand, and the cooking time is merely the two minutes it takes to sear the fish fillets on both sides. The flavours of Orange and Juniper are subtle but definitely present, and the slight bite of the citrus goes well with the oiliness of the salmon.

I generally serve this with a light green vegetable - more often than not julienne of cucumber, sautéed in butter.

Ingredients: 300g Salmon Fillet (skin on or off, as you prefer - I rather like the crispness of the grilled skin, but it takes a minute or so longer to cook); grated rind of one large Orange; 6-8 dried Juniper Berries, ground in an electric coffee grinder; 2 tbs Gin; oil, or Trennwax, for frying.

1. Slice the fillet into three pieces, and place in a shallow dish. Evenly scatter the Orange rind and ground Juniper over the Salmon, and pour the Gin over the top. Turn the pieces of fish over several times, to make sure the other ingredients are evenly distributed over the surface. Leave to sit until you're ready to cook them (as I've stated elsewhere, I'm no great fan of the benefits of marinading, but it is practical to get the Salmon to this stage some time in advance of cooking it, and you can certainly leave it like this for several hours or so)

2. Heat a griddle or heavy frying pan on the stove until very hot, and either brush it with Oil, or else spray with Trennwax (if using oil, be sparing - you don't want the Salmon to swim in it).

3. Grill the Salmon pieces two minutes or so on both sides - you can watch the salmon coagulating as the heat penetrates it, and turn it once the heat has clearly penetrated from the bottom to the middle. Lightly salt the Salmon pieces just before and just after you turn them.

...of the past ten days or so, have been many and varied. The covered market in the centre of Kiev, where babuschkas of all shapes and sizes hawk caviar, and fruit and veg, and smoked eel, and many many different kinds of smoked curd cheeses (which looked tempting, but not a good idea, since I suspected that they wouldn't pass the definition of 'liquids' that would be applied by the security gremlins at the airport... and I never, ever check baggage when I fly...). And the street market outside, which was the only place in Ukraine where I saw people shopping in any numbe

r - presumably a direct reflection of the current dire state of the Ukrainian economy (emphasised by the fact that just along the street, outside the Town Hall, the mayor of Kiev is selling his mayoral limousine, and it stands there, rather forlornly sporting a 'For Sale' sign on the windscreen...) In the street market, people wrapped up against the cold, were clustering around stalls which sold great sculptural slabs of gingerbread - I bought one as a dinner-guest offering to take to the Brancolis-in-London, where we were due to dine on the following evening - and metal bathtubs full of large, flapping, and still very much alive Carp. One man was trading from the back of what was clearly an army truck, piled to the gunwhales with large green cabbages, the earth from the field still clinging darkly to them, and he grinned broadly whilst offering plates of his homemade coleslaw....

en there was dinner with the Brancolis-in-London: a majestic game pie, followed by what can only be described as the acme of steamed puddings...the lightest, most mouth-wateringly unctuous, and certainly the most delicious treacle pudding (with a splendid undertaste of orange) that I think I've ever eaten. Bar none. And a 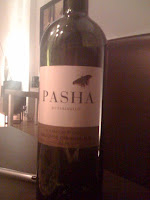 raft of cheeses, all washed down by a (blind) comparison tasting of the Brancoli's latest bottled vintage with a tre bicchieri from a tuscan house of some renown, but which was exactly the same blend of grape varieties. Fooled by the edginess of the San Giovese that was more evident in the commercially-produced bottle, I got the identification completely wrong - which was most gratifying for the resident wine-maker, and an indication of just how well we were being fed and watered!

The christmas windows of Sprungli in Bahnhof Strasse in Zurich were another highspot, piled high with festive chocolate creations, and a treasure trove of boxes of Luxembergerli coffee and chocolate macaroons worthy of any aladdin's c

ave. The french have done such a thorough job in the past few years of adopting macaroons as a french product - significantly as a result of the efforts of Pierre Hermé and his macaroon fantasies at Ladurée - that people seem to have forgotten these days that macaroons were actually a swiss indulgence long before the french got in on the act. Just as they did a couple of centuries I ago, I suppose, when vienoisserie pastries arrived in Paris in the wake of Marie Antoinette, and have been considered as 100% french ever since. No less delicious for all that...

And in my list of highspots, I can't leave out the glorious sunshine in Cannes, last week, when the temperatures soared, and walking along the Croisette without a jacket felt more like May

than November. Lunch at the Majestic featured slices of Foie Gras (de Canard, but then I suppose you can't have everything) which set the taste-buds tingling - but in fact wasn't quite as delicious as the home-cured version that is a speciality of 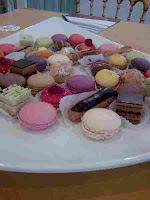 the Technical Department - and a healthy (for which read 'un-healthy') quantity of champagne of a more than respectable quality. The star of the week, food-wise, though were the blackberry macaroons that were served by the Hotel Martinez (yes, a theme emerges) which looked amazing, tasted sublime, and literally melted in the mouth. Truly, the platonic form of the macaroon!

The lowspot, in comparison, was a sandwich I consumed in Zurich airport. Without question, the worst sandwich I have ever eaten in my life. Even as I bit into it, I had my doubts - but this is the sort of thing which happens after too many flights and late nights and early mornings within too short a period: the system craves comfort food, and won't be denied. So, even after the unpromising first taste of doughy, cheese-flavoured bread, I ploughed on. Unwisely. The contents revealed themselves as a mélange of ingredients that were mostly unidentifiable, but which in general had a rather clammily organic quality, along with a generally unpleasant flavour of pickle and sausage. I ate it. I confess. And although it avoided fighting back in any obviously mechanical fashion, I somehow felt that it stayed with me for several days thereafter - which was not a positive experience.
Dear Reader, be warned: at all costs, avoid the sandwiches at Zurich Airport!

Back home to Italy tomorrow for a week... I anticipate autumnal sunshine and some serious work in the garden, which should be good both for it and for me.

Tartlettes of Tomato, Thyme, and Gorgonzola.

Marsala and Prune Possets.
Posted by Pomiane at 18:35 No comments: