It's been a busy ten days! The journey down to Italy with the two four-footeds was long, but uneventful - the mini four-footed reclined palanquin style in his cage in the back of the car, and regarded Europe with a sanguine air, as it passed by on the other side of the window; the senior four-footed merely slept and ignored the whole thing. Dinner en route, for a change, was very good indeed. A prix fixe menu at the Hotel aux Terrasses at Tournus, which included, amongst other things, an amuse gueule of truffled foam and another of a leek custard; very good roast pigeon; foie gras; excellent cheese; and a dessert of ginger sorbet and poached greengage which was spectacularly good. The mini four-footed was introduced to the concept of fine dining, and behaved impeccably by curling up and sleeping under the table the entire time - not bad for exactly three months old - and something he's subsequently repeated at Bandierine in Via Mercanti. (so, I think we can take it that he's got the general idea).
It was raining pretty much all the way from Calais, and the final stretch, along the ligurian coast south of Genoa was fairly torrential, and stayed that way on and off in Pisa for the followi 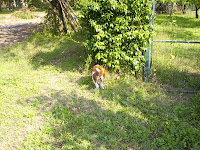 ng three or four days. Very good for gardens, but depressing and impractical otherwise...muddy canine footprints everywhere, and lots of damp doghair. Some of it made even damper by the fact that the puppy went through the usual rite of passage and managed very quickly to fall into the lily pond not once but twice (clearly, the first time wasn't a sufficiently salutory learning experience!).
For the past few days, however, we've had a return to high summer, with clear skies and bright sunshine, and temperatures in the high twenties - but combined with a stillness in the air and a general calm which somehow only happens here during the autumn. Since the weather improved, the dogs have been racing around the grounds at Santa Caterina every day - which they think is amazing, and tire th 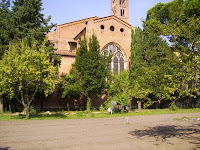 emselves out so efficiently in the process, that they crash out for much of the rest of the time.
Santa Caterina itself has been a lot of work!We've plugged holes in the perimeter fences in the orchard, and at the end of the walkway behind the church, and then removed other fences within the property which no longer serve a purpose, as well as uprooting and removing a very scrubby little pine hedge, the absence of which opens up the land to the east of the church. The end result is a combination of aching muscles and (already) much improved vistas. Still vast amounts to do, needless to say...

Anima Mundi concerts are now almost a third of the way through, and we've managed to catch two of them so far, the second of which was Viktoria Mullova in the Camposanto, playing Bach sonatas. Stunning. As she always is, pretty much. This evening, the Vienna Boys' Choir are performing in the Cathedral: Bach, Brahms, Byrd...
Pre-concert Dinner:
Celery Risotto
Spezzatino, with artichoke hearts à la crème
Nectarines baked with cream, brown sugar and cinnamon.
Posted by Pomiane at 08:03 No comments: