I think I've got somewhere on Joanna's issue about why the way in which food is consumed is important. It's a contract. Between the members of the group that constitute a household unit. Cooking is undertaken with the wellbeing of the group in mind; and the way in which the food is consumed demonstrates respect for the thought and effort that went into its production. Grazing from the fridge, or chowing-down on a pork pie in the street as you wander away from the supermarket, or even sitting down in a group and eating as you all stare at a TV screen is to relegate food to the status of a purely functional energy-giving fuel source. It devalues it as an element within the relationship 'glue' that exists between the group members.

Does that work? I believe it does, or at least in part......it explains, for instance, why microwave cooking doesn't count, since the time, thought, care and skill involved in the process are fairly negligible. I think (Passionate Palate) it also works in the context of cooking just for yourself - demonstrating respect for yourself and for the standards by which you live.....

Not a complete thesis, but the beginnings of a skeleton of one. Perhaps.

Talking of food and theses, I was astonished by the student meal-planning system enthusiastically trumpeted abroad by the authorities at Carnegie Mellon University. Something they call 'community-oriented dining experiences'. I kid you not - they honestly

do.....! I was left completely baffled by the minutiae of it all. In any event, though, the students there must be phenomenally clever, since, in order to get to grips with the Red, Blue, Green, Plaid, Commuter eating plans....and probably polka-dot and rainbow coloured plans, too, for all I know .... they must all have the IQ of Einstein.I suspect that in their position, I would merely be discovered at the end of term as a pile of whitened bones or at the very most an emaciated cadaver, skeletal fingers wrapped tightly around a copy of the Carnegie Mellon Meal Plan programme! You can read it for yourself , if looking for a challenge. You will be tested on it afterwards......

.....will be taken in the shady glades of Kensal Rise, courtesy of Ms Robinson.
Posted by Pomiane at 18:00 2 comments:

This recipe was passed on to me, recently - I believe it was taken from the New York Times, but before that its provenance is unknown. If anybody could tell me where it came from, and where I might find more by the same author, I would be very grateful! It read 'interestingly' on the page, and I let it sit there for quite a while before I tried it. In practice, it is absolutely delicious - and unusual, too, in that the texture is light, yet the flavour is a beguiling combination of the strong tones from the soy and the onion , along with the subtle flavour of the Clams which pervades the steamed souffle.......

1. In a large pot fitted with a steamer rack large enough to hold 2
(8-ounce) ramekins, bring a quart of water to a boil. Divide the Clams between the ramekins.

2. In a small bowl whisk 1 egg until frothy. Whisk in an equivalent amount of Chicken Stock along with a dash of Salt and Pepper. Pour this mixture over the Clams in one of the ramekins. Repeat with the remaining egg. Place the ramekins on the steamer rack in the pot.

3. Cover the pot and simmer for 12 minutes. Remove the ramekins from the steamer. Garnish each with a small drop of sesame oil, a few drops of soy sauce and a sprinkle of scallions. 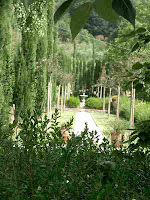 Two splendidly bucolic days up in the hills above Lucca! Tempo Italia - online Italian weather forecast - got it completely wrong, as it does 50% of the time, and there was no need for the gum boots and sou-westers that had been gloomily predicted......

On the first evening, we sat under the Persimmon Tree and generally put the World to rights over a glass or two of pre-prandial Prosecco, as the swifts gathered, and the sun went down over the valley. B 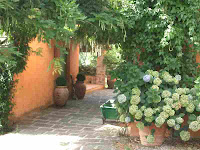 rancoli is steep and heavily wooded, and taking in the view down towards the plain and Lucca in the distance gives the impression of being high, high up in some alpine fastness.

Dinner that evening was at La Mora, down in Ponte a Moriano, at the foot of the hill. Despite the Brancoli pre-publicity that the restaurant was quite simple in style, it turned out to be an environment of damask tablecloths, candle-light, and discreetly deferential waiters. So, sitting in the restaurant garden, under the densely-leafed pergola, in an atmosphere of elegant calm, it came as something of a shock when the 20.56 from Ponte a Moriano to Castelnuovo di Garfagnana came thundering past, literally five feet away from my left ear, and only the other side of a chain-link fence. Since the restaurant has been in place since 1867 - and presumably pre-dates the railway line - then the unruffled countenances of the staff was largely understandable. And by the time the 21.29 from Castelnuovo di Garfagnana to Ponte a Moriano did the return journey it came as less of a surprise - but, for all that, was still a little like dining on Platform Nine at Euston Station!

The food was - for the most part - extremely good. We had the menu de degustazione - eight courses, in all - from which there were some definite highlights: ravioli in marjoram sauce were very good, indeed; as were zucchini flowers stuffed with force-meat, and served in a light white sauce; confit of pigeon was delicious, and roast pork was good without being spectacular. The Brancolis liked the red pepper mousse (actually more like a bavarois), which I found slightly bland - and we all gave the thumbs down to a rabbit mousse, which seemed intended for people with neither teeth nor taste-buds. The first few courses were accompanied by a Sanct Valentin Gewürztraminer - which was a welcome discovery on the wine-list; Sanct Valentin output is splendid, but there isn't a great deal of it around, sadly - and then we moved onto a couple of bottles of Avvolture 2004 (Moris Farms). Grappa was left until after the return journey up the hill had been negotiated - very wise! - but consisted of a comparison of grappas flavoured with either cherry stones, or cherry flesh (the latter surprisingly - and deliciously - unfruity).

All-in-all, an excellent evening. And not a hangover in sight over breakfast, the next morning! 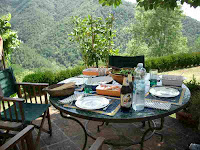 as idyllic. Vitello Tonnato, accompanied by a cornucopia of salads, and washed down by ice-cold beer. Consumed in the shade on the terrace, looking down over the olive groves beyond the end of the garden. The timetable demanded that we finish all too soon - when I could happily have sat there all afternoon ! - and we went off to visit gardens for the next few hours (Villas Reale and Oliva ), not least as a means of working up an appetite for supper. .... 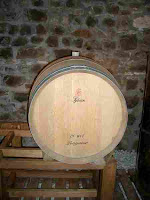 ......which served as the backdrop to a vertical tasting of the Chateau Brancoli output for the past three years: 2005, followed by 2004 ( the so-called 'jug' wine) and then the cream of the crop, 2006. To sop it up, we ate a Risotto di Gorgonzola, followed by Boned Chicken roast with Sage, and braised Celery, and finished off with lavender-poached nectarines and Fig Ice-Cream. We worked our way through the 2005, and the 2004 (which had definitely improved over time, and actually might have been 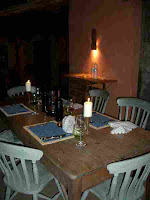 worth bottling after all, we decided).....and then we broached the 2006. Ah! Now that is Wine! was the universal cry around the table. It had been good when first sampled on the night of the luminara, several months ago - but had clearly get better during the period in between. We didn't stop at the first bottle either, and dinner was punctuated by a visit to the Cantina in order to inspect the barrels!

When we left, the following morning, weighed down with plants, and jam, and two more carbuoys of wine - intended for the next grappa distillation - it was with a sense of much pleasure. Only slightly dimmed by the dawning realistion as we unpacked the car back in Pisa that we'd actually forgotten to include our luggage, which was still patiently waiting back in the guest-room up at Brancoli! Maybe the alcohol consumption over the past two days had had a deleterious effect on the brain cells, after all! (Fortunately, yesterday was Ferragosto, the biggest holiday in Italy all year, and so the roads were empty, and it only took forty minutes to drive back and - rather shamefacedly - leave once more, this time with our bags...)

Enough of this! We leave for London for two weeks, this afternoon, and I have a million things yet to do before then......

The 'what IS cooking?' debate carried on over dinner last night, and we teased out a few more strands of an idea - in part following on from Joanna's comment that food should be properly cooked, and consumed sitting down, around a table. There's definitely a social aspect underlying the idea of cooking - it's something that you do for your group. Which perhaps goes someway to explain the sense that non-cooking is somehow mean - perhaps it denotes a smallness of spirit, or an ungenerous mind?

The Technical Department then started off on a tangent all about families that 'graze' from the fridge rather than sit down together to eat as a group - and as it threatened to turn into a 'the problem with people today is'.....rant, it seemed better to move on. Before we did so, though, we definitely concluded that the 'food as job' exponents should be removed from the debate, as they 're really in a different category, and only muddy the waters. I'm talking about the Ramsays and Delias , here - essentially, I think of these as technicians, in whose recipes you never come across references to childhood food memories, and things learnt at their mother's knee, as you do for example with Raymond Blanc or the inestimable Mr Loubet. No, I haven't explained that one properly.....just because a person wasn't brought up around cooking doesn't mean they can't develop the sense of it for themselves later in life. This is definitely an idea that needs more thought.........

We're off up to Brancoli this afternoon, for a couple of days' R+R. Since it seemed a good idea to replenish our stocks of Brancoli wine at the same time, in preparation for the next grappa distillation, we cleaned out the requisite carbuoys in order to do so - and found amongst the dregs in the bottom of one of them a Vinegar Mother. Not a thing of beauty, but quite a practical discovery. Having decanted it into an appropriate bottle, all we now have to do is to add the remains from future unfinished bottles of wine, and it will beaver away and provide us with splendid vinegar ad infinitum, in the months and years to come. Hmmm. I knew there had to be a drawback. 'Future unfinished bottles of wine.....'? In this house...?!?

I am reliably informed, will be courtesy of La Mora Restaurant.
Posted by Pomiane at 09:22 4 comments: