...then it might have made some sense. But it wasn't - and the recent piece of deathless prose which appeared under Heston Blumenthal's byline in The Times online left me fairly speechless, and reaching for a calming glass of something. Hard to believe, but the following (paraphrased, in the interests of sanity) is his method for making what is essentially a rich beef tea:

Step one is to make a standard beef stock, sautéing industrial - but peculiarly precise -

quantities of meat and vegetables (21.25 kilos of meat, along with 7.5 kilos each of peeled carrots and onions and - although, surely some mistake here ? Ed. - 7.5 kilos of star anise!), which is all then deglazed using 7.5 bottles of red wine. Not 7.62 bottles, or 8.3 bottles, but a definite 7.5...(At this stage I began to wonder if we were in James Hamilton-Patterson territory, and like 'Cooking with Fernet Branca' the whole thing was just one enor

mous spoof; but it would appear not).

In step two, this 5.625 litres of liquid is reduced by 2/3 to become 1.875 litres, thus removing 3.75 litres of water - but immediately you then add 28 litres of water...which leaves me wondering why you'd bother with the initial reduction, and not just add 24.25 litres of water instead?
In step three, you make a mushroom stock, using 400 ml of Madeira as the

deglazing agent, which you then reduce to 50 ml...to which you then add....um....3 litres of water - so why did he not just skip the earlier reduction, and merely add 2.65 litres of water? And in any event, soon after this he reduces the liquid again to 30% of its earlier volume, thus removing 2.17 litres of the water he's just added. Hmmm.
Then you mix together the two stocks and freeze them to make rectangular slabs, which you then sieve very slowly through a fine strainer, which allows you to separate most of the remaini

ng water from the concentrated juices ...which you then re-freeze and then centrifuge (we all have a centrifuge in our batterie de cuisine, right?) in order to get rid of the frozen water...and then , just to be on the safe side, you put the stuff into your centrifugal evaporator (I think that's that thing at the back of the cupboard, just behind the chip pan and to the left of the cheese fondue set) and leave it there for about four hours, to make sure there's absolutely no water left at all, leaving you with half a litre of thick beef syrup.
Phew!
But, there's more. At some subsequent time, the syrup is mixed with madeira

and gelatine, and allowed to set into a jellied lump....which, according to Blumenthal, for presentation purposes, is brought to table and served in a teacup, along with....um.....a teapot of boiling water, which you use to reinvigorate your jellied lump of beef syrup, and turn it into a cup of beef tea. (So, you can cross out all those centrifugal evaporators from your Christmas lists, since it seems that everything from the point where you made your frozen rectangular slabs of combined stocks onwards was a complete waste of time.)
Now, an uncharitable interpretation of all of this might be that HB feels the need to distance his cooking methods from those of us lesser mortals by all these ....yawn....impressive and complicated machinations, in order that he can keep the prices and the queues at The Fat Duck firmly in place. A (marginally)less cynical view might be that this is just a bored child playing with his food...

We relayed the whole process to the lady cook of one of the local restaurants here, and her response was somewhat pithier. Having listened , hands on hips and frowning with concentration as she digested the process, her comment, thrown over her shoulder as she made her way back to her busy kitchen, was merely : "Che Cretino!"

If you want to read the original Blumenthal article, then it can be found here.

Or, strictly speaking, yesterday - being August 15th - was Ferragosto...except that the event appears to have become more of a concept than an actual date, and the midsummer holiday that it betokens will now stretch way into the middle of next week, having wound down into into ever greater levels of somnulent inactivity over the last half of last week. Everybody has left for the beach, town is empty, and in the shattering midday heat, the street outside has a silence you could cut with a knife.

When we first arrived in Pisa, and discovered that Italy too has a holiday on August 15th

, we assumed it was the same holiday as in Greece, where it's celebrated as the assumption of the Virgin and is one of the major dates in the church calendar. When we lived there, it was well understood not to travel on the ferry to Athens in mid August, as we lived on the same ferry route as Tinos, and you could be certain that all boats during that period would be packed to the gunwhales with hysterical and over-excited hordes of the (literally) halt and lame, all on their way to ask for a miracle from the wonder-working icon of the Madonna housed in Tinos Cathedral. Or, even worse, the same hordes, but tired, tearful and disappointed, making the return journey afterwards. 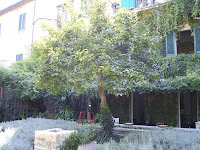 ver, although the church tries vainly to claim Ferragosto as a celebration for the virgin, nobody takes much notice, and what it has resolutely become is a festival in honour of ice-cream and beaches and not getting up until noon, and of doing absolutely, gloriously nothing as the summer holiday extends into one stultifyingly hot day after another...
In fact, even the name itself seems to pre-date christianity, and refers directly back to a festival of Diana that the romans celebrated at around the same time - even as I write that, I wonder if the name was re-introduced as another of Mussolini's strategies for reminding the Italians of their great classical heritage, but to be honest I'm feeling too lazy right now to go and check. 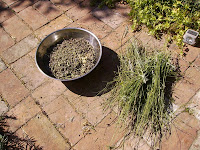 For us, though, Ferragosto is about lazing around at home, and revelling in the silence of the surrounding town. The two chores of the moment which I'm 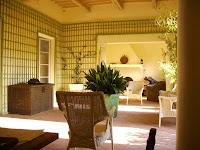 taking steadily - an hour a day at most, every day, in order to render them tolerable over time - are stripping the Caci tree of its unripe fruit (thousands and thousands of the things, all of which will ripen and drop messily at the end of September if left to their own devices) and dead-heading the lavender and laboriously collecting the flower heads in order to have scented bowlfuls of them around the house through into the winter months. At the moment, the smell from the decapitated flowers is heady and intoxicating, and hits with a menthol intensity immediately on entering the kitchen.

It's a hard life!