A first cousin of the ubiquitous Lemon Tart, and yet something which is rarely to be found on menus or in recipe books. I have no idea why. If anything, this tart is even more delicious than the lemon version, with a deeper and more complicated flavour, and a texture which is generally creamier and more sensual on the tongue.
This recipe comes from Marco Pierre White - although, as is often the case with him, the quantities were all over the place in his published version, and his idea of what was appropriate for 'eight servings' would have fed an entire platoon, by my reckoning. You can play tunes on the recipe, as well - in the past, for instance, I've scattered fresh raspberries over the pastry shell before filling it with the orange cream (not something I tend to do now, as I use oranges from the garden, and for obvious reasons, they never coincide with garden raspberries), or you could use toasted slivered almonds in the same way.
I have, before now,  used OJ from a carton for this recipe, and it works perfectly well - I suppose I now just have the zeal of the convert in relation to the fruit growing outside my own door, and so eschew the commercial option.
The quantity given here will probably give more orange cream than you need for the tart - it depends somewhat on how high the sides of the tart shell are (or if it has shrunk in places in blind baking) and also perhaps on how much 'displacement' there has been if you have added other ingredients to the tart shell before pouring in the cream. No problem. Pour any additional cream into a ramekin (or two) and bake in the oven alongside the tart. The baked creams are meltingly delicious, and can be served on another day as a dessert, heaped with fresh berries.

For an eight inch tart:

1. Blind bake the pastry shell at 180 degrees C until completely brown and crisp - it won't get cooked any further at the lower temperature used for setting the cream filling, so all the baking needs to be done at this stage. Reducethe oven temperature to 130 degrees Conce the shell has been taken out of the oven.

2. Put the Orange Juice into a pan over medium heat, and reduce to half the original quantity.

3. Beat the Eggs with the Sugar, until pale yellow, then whisk in the reduced Orange Juice, the Orange Zest, and the cream. Stir to ensure all ingredients are thoroughly amalgamated.

4. Carefully fill the tart shell with cream, as full as you can, and place in the 130 degree C oven for half an hour. At the end of this time, the tart should still visibly 'wobble' in the centre - it will continue to firm up under its own heat once it has been taken out of the oven.

Allow to cool to room temperature, and serve.
Posted by Pomiane at 10:01 2 comments: 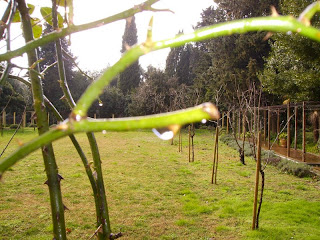 I'm bored with it. The garden is a squelchy, soggy mass, from days on-end of rain. I've had to dash out between downpours this week to plant clematis (montanas Grandiflora, Rubens, and Elizabeth) and roses (Paul's Scarlet Climber, Coral Dawn, and Kriton - which is in fact Iceberg under another name - to smother parts of the new pergola, and Mr Lincoln, Jardins de Bagatelle, and something which calls itself Letizia, but which I suspect is really Silver Anniversary, in one of the beds at the end of the north lawn). No serious gardening...although, once things have dried out a  bit, it should be very plain sailing to dig the three new flowerbeds - which are almost the last remaining task on my list of serious Winter to-do's. Once those are done, and we've reconstructed the fruit cage, and I've pruned the two remaining old apple trees, then I can get started on post-Winter tasks, like pruning the hydrangeas, and cutting back the pennysetum and the buddleias, which should be synonymous with the start of Spring.

And  not a moment too soon, IMHO. 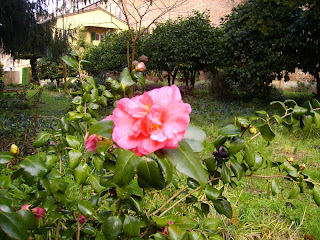 Irish Stew (Richard Olney's version, which he claims is more French than Irish...and he certainly seems to think it goes better with Beajolais than with Potcheen)

Tarte à l'Orange (almost the last of this year's crop from the large orange tree outside the office window - which has kept us in fresh OJ every morning since before Christmas).
Posted by Pomiane at 11:34 No comments: