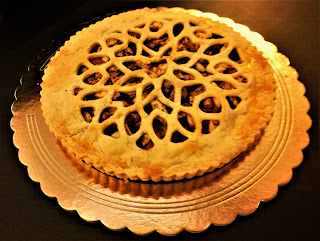 I like the idea of quince- and the blossom on the tree in spring is exquisite - but the reality of the fruit is often challenging. Rarely is it that I cut into a quince without finding I then have to dig out all the wormy sections, and the road-kill remnants that I then have to work with are not a noble sight. I can well-understand why it is that this fruit is no longer grown commercially! On occasion, though, I come across a recipe which restores my faith in the things.....and this is one such. The flavours are subtle and complicated, and the combination of spice and rich fruit is comfortingly reminiscent of Christmas. It has much to recommend it.

1. Roll out the pastry to line a 28 cm diameter false-bottomed tart tin. Freeze the base for twenty minutes, and then blind bake it at 190°C  to biscuit crispness. Roll out the remaining pastry to a size and  shape large enough from which subsequently to cut the top for the pie, and refrigerate this pastry, to firm up.

2. Grate the jest from the oranges into a bowl and set aside. Into a saucepan of medium size squeeze the juice from the oranges and lemons; to this, add 1 tsp cinnamon and 3/4 cup of sugar, and the sweet wine; add the quince quarters, cover with water, bring to the boil  on the stove, and then cover and simmer until the quince pieces are properly soft (perhaps 15 minutes). Remove the quince pieces to a bowl, and over a low heat reduce their poaching liquid until it is a syrup, and allow this to cool.

3. Combine the apple slices with 2 tbs sugar and 1 tsp cinnamon and the grated orange zest. Use half of this mixture to line the base of the baked pastry shell, and then place on top first the quince pieces, than the quartered prunes and the almonds; spread the remaining apple mixture over the top.

4. Take the remaining pastry from the fridge, and cut out the top for the pie, using a lattice template if so inclined (I generally do). Put the top in place, pressing down with a rolling pin to attach it firmly to the top of the pastry shell, and to cut off the excess pastry around the side. Brush the top of the pie with beaten egg-white, and then bake for forty minutes.

5. Allow to cool properly before you remove the pie from the the tin. Serve warm or cold, with a spoonful of the reduced poaching liquid as a sauce. Be warned: one slice is not enough! 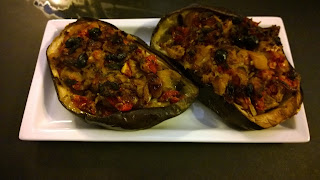 The ingredient which makes this dish is, surprisingly, the 1/4 tsp of allspice, which gives it a whole additional dimension, as well as hinting at some elusive 'other'....which could be Athens or it could be Marrakech. Whichever it is, these are best served cold, with at least the suggestion of a hot summer's day in the background.

1. Halve the aubergine; cut out as much as possible of the flesh, then salt the shells and leave them upside-down to drain of liquid for twenty minutes or so, before blanching them for 2-3 minutes in boiling water.

3. Sauté the onion and garlic in 2 tbs oil, until soft, then add to this the chopped aubergine flesh, salt, pepper and allspice. Cook over medium heat for 3 - 4 minutes, then add the sultanas and tomato, vinegar and sugar. Cook together for about five minutes, until it becomes a thick stew;stir in the chopped parsley.

4. Arrange the aubergine shells in a baking dish in which they fit snugly, and fill them with the mixture. Mix the remaining oil with the water and pour over the filled shells. Bak for about an hour, and then leave to go cold before you serve them. 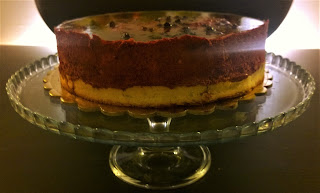 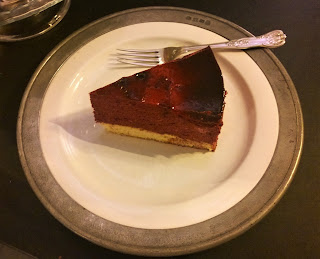 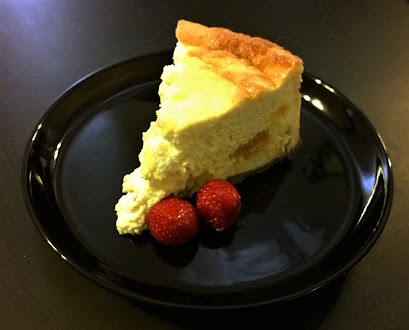 Pockets of apricot puree, waiting to be discovered within a delicious vanilla and citrus cream filling. I find this is best left for 24 hours after ithas been made and before you serve it -if you can! -  the texture becomes creamier over that time.

1. Heat oven to 180 degrees C. Blitz the biscuits along with the melted butter, in the food processor. Grease and line the base and sides of a 9" spring-clip pan (I find this cheesecake can be tricky to unmould,hence the advice to line the sides as well as the base of the pan). Press the biscuit mixture into the base of the tin, and bake for ten minutes. Allow to cool.

2. If the apricots you have are not soft, simmer them for ten minutes in 1/2 cup water to soften them. if already soft, omit this step. Add 1/3 cup sugar, and liquidise (add a little water if the puree seems too thick)

3. Beat the egg whites until stiff.

4. in a separate bowl, beat the cheese with the sugar, then add to it the lemon zest and juice, and the vanilla. Beat, to mix thoroughly, and then fold into this mixture the beaten egg white.

5. Pour a third of this mixture onto the biscuit base, and then dot half of the apricot puree over the top, in spoonfuls. repeat this process, and finish with a layer of cheesecake mixture.

6. Bake for forty minutes, and then leave in the cooling oven for an hour with the heat off. Allow to cool thoroughly before you remove the cheesecake from the tin. 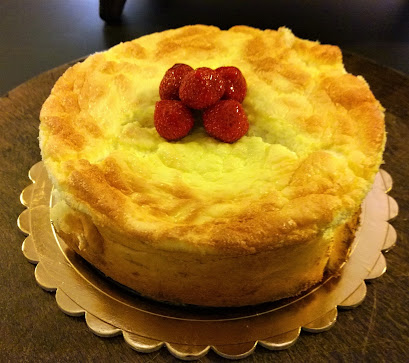 Timbale of Tarragon and Zucchini 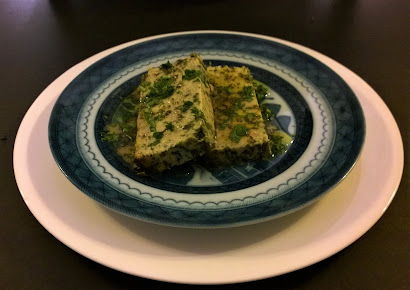 Light, delicious, quick, and easy. For a dinner-party, or to snack on, from the fridge...

1. Heat the oven to 180 degrees C. Grease a 1 litre loaf pan, and line the base and short sides with a long strip of baking foil, for ease of removal of the finished timbale. Use 2 of the tbs of parsley to stick to the greased sides of the loaf tin.

2. In half of the oil, cook the onion and zucchini until tender, with half of the dried tarragon and a further tbs of parsley; in a covered pan, over low heat, this should take ten minutes or so. Allow the softened vegetables to cool a little, once done.

3. Process in a processor the cooled vegetables, eggs, breadcrumbs, parmesan, and cream. Add salt and pepper, to taste.

4. Transfer the mixture to the prepared loaf tin, place in a bain marie, and bake for fifty minutes. Once cooked, allow to cool completely, and then refrigerate.

5. Make a dressing, using the remaining oil and tarragon, along with the vinegar and mustard; add salt to taste.

Slice the un-moulded timbale, and plate, before dressing with the tarragon dressing, and garnish with the remaining parsley. 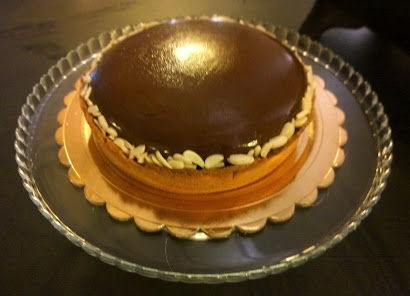 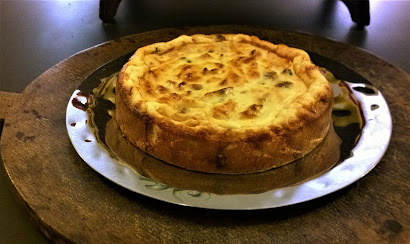 Ricotta cheesecake. Lighter than the usual version, due to the addition of beaten egg-white just before baking.

2. Beat together the whole egg plus the egg yolks, along with the sugar and ricotta. Once it is uniformly smooth, beat in the rum, and then fold in the peel and the sultanas.

3. Separately, beat the egg whites until stiff, and then fold them into the mixture.

4. Pour the mixture into a 22cm spring-form tin (greased, and with the base lined) and bake for thirty five minutes.

5. Allow to cool for twenty minutes or so, before removing from the tin. Serve either warm or cold.