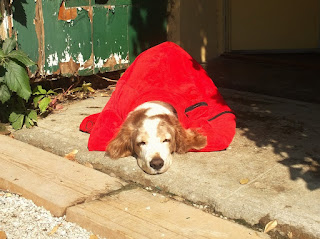 ...taking his new dri-bag for a test drive.

Being seriously elderly, the four-footed requires much more frequent baths than used to be the case (for reasons which we need not go into, to avoid blushes). And when this can involve the use of a garden hose in the middle of the north lawn, where he can then dry in the sun, stretched out beneath one of the fruit trees, all works well, since he remains in pristine condition until he's dry, once more. If he's bathed in the house, however, his preference is then to go hot-foot to the courtyard, where he scruffs around and digs a hole in the gravel just the right size to lie in....which means that within minutes of escaping the bath, he is completely filthy from all of the dust and general grunge which lies beneath the gravel. Hence, the dri-bag. Which conveniently corrals him while he gently steams dry inside.

He hadn't seen one of these things before, and was mildly thoughtful about it all.

When he wasn't merely trying to wander off, that is, as I wrestled with the damned thing's zip.

Unlike his great aunt, though, once he was inside, and all properly sealed, he settled down perfectly well to the experience. His great aunt, who was a dog of much character, on the other hand, had decided within minutes of first being put into a dri bag, that what was needed was two neat holes for the feet...which she then proceeded to create, while my back was turned. It was more of a statement of independence, I think, than a practical attempt at escape, as her back legs were still incapacitated in the rear part of the bag. She'd made her point, though...as she so often did.