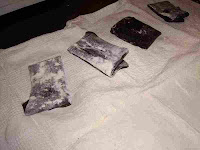 For years, by far my favourite pasta was the black ravioli filled with Cod that Claudia sold in Vettovaglie; cooked as soon as the water came back to the boil, and served with just a coating of melted butter, the flavour was always excellent. Even after I began to make my own pasta again, last year ( after Claudia had disappeared and her beautiful shop had been transformed into an anodyne aladdin's cave selling sweets and over-decorated cakes) I held off trying to replicate this particular dish... probably from an undue sense of diffidence.

I shouldn't have done.

The following recipe is straightforward, and absolutely delicious. Even better, I think, than Claudia's version used to be. You don't have to use black pasta, if no squid ink is available, but it's better if you can, as the result is better aesthetically, and the ink imparts a slight tang to the pasta which works well against the creamy fishiness of the stuffing.

The quantities given here will leave you with enough stuffing to fill ravioli for four, with sufficient left over to make fish pithiviers as a starter for dinner later in the week.

1. Make the Pasta dough in the food processor, and leave it to rest as you prepare the stuffing.

2. For the stuffing: sauté finely diced onion in melted butter for three or four minutes until it is translucent, add the Anchovy and cook for a further couple of minutes, stirring, to break up the fillets. Add Cod Fillet, cut into half-inch dice, raise the heat, and cook stirring for a couple of minutes, then add the Wine and reduce until the liquid has almost all gone. Remove from the heat, and leave to cool down for a few minutes before you stir in the Ricotta and the Egg. Before using, taste the stuffing and add seasoning as necessary.

3. Roll out the Pasta Dough into sheets about a foot long, and use each one to make five ravioli, using a teaspoon of stuffing in each one.

4. Bring to the boil a large pan of salted water, and add the ravioli to this. They're cooked as soon as the water returns to the boil, and the ravioli rise to the surface.

Serve, tossed in melted butter.
Posted by Pomiane at 09:05 No comments:

January 6th, and Christmas has finally come to an end.

In the UK, everything is over (including the shouting) once the hangover has wound down on January 1st; by the time the tree comes down on the 6th (if it even lasts that long) it's merely a sad and tired reminder of the long-distant memories of Christmas morning. In Italy, however, La Befana keeps it all going right through until the end. La Befana is an old crone with a broomstick, and January 6th is the day when she gives all good children shoes full of sweets as a reward for

good behaviour (or, apparently, lumps of coal if otherwise). Mussolini was keen on the Befana celebration, apparently as part of the nationalist-consciousness-raising value that he ascribed to folklore customs of this kind (or 'fakelore' as the Technical Department growls disparagingly), but you can imagine he'd also have approved the practical arrangement of making the sixth a holiday, to allow people to remove all the detritus from Christmas and get their lives back on track in order to start the new year in an organised and productive manner. 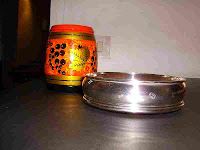 inal Christmas presents were exchanged on the evening of the fifth - a silver wine-bottle coaster, and a jar of Ukrainian honey from the central market in Kiev - and on the morning of the sixth the tree was denuded of ornaments and unceremoniously dumped in the rubbish bin in Via San Francesco. Sic gloria transit. Until next year.

Eggs in Ramekins with a saffron-scented Ratatouille.

Limoncello Panna Cotta.
Posted by Pomiane at 13:43 No comments:

People have been making a version of caramel pretty much since the advent of refined sugar, I would think - so, you'd expect the process would by now be well and truly sorted out. But, it seems not. No two versions that I've ever come across agree with each other - and the rather vague language the writers generally use makes me suspect that they've all had a nasty experience with the stuff at some point in the past (and which experienced cook hasn't? I know I have - it's almost impossible not to!)

Over the years, I've tried all sorts of different methods - the one where you laboriously brush the sides of the pan with cold water as the sugar bubbles...or the version where you dunk the bottom of the pan into iced water as soon as the caramel starts to colour - and the method given below is the only one I've tried that I really like and have found completely reliable. It's also the only one which uses lemon juice within the mixture, and although I have no idea structurally what difference it should make, it certainly seems to make the process much more straightforward. It comes from Anna del'Conte's 'Entertaining all'Italiana'...a book which briefly saw the light of day towards the end of the eighties and then seems to have sunk without trace.

The quantity is sufficient to use in six ramekins for either panna cotta or crème caramel.

Place all ingredients in a pan, and bring slowly to the boil, stirring gently with a wooden spoon. It will take some time to start to colour, but will then turn first a pale gold and then dark brown. At that point, remove it immediately from the heat and pour it into the containers. (NB: if using the caramel to line ramekins, it is best to heat them first in a 170 degree C oven for five minutes - this will prevent the caramel from 'seizing' when coming into contact with cold porcelain.)
Posted by Pomiane at 08:58 No comments: 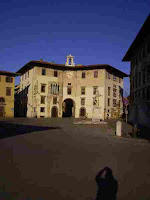 Sunday mornings here are generally pretty low-key - which is strange, really, since it's hardly as though the preceding Saturday nights are scenes of unbridled debauchery in the streets of the town (quite the opposite, in fact - I should think most people are comfortably ensconced in front of the TV, if not actually tucked up in bed, by soon after sundown). The first Sunday of January, though, when we're still in the last days of the holiday period, is especially peaceful. One of the most promising times of the year to be 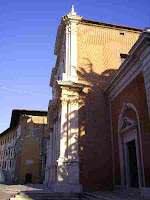 doing anything which you don't want observed - which might explain why our neighbour Professor C was this morning unloading a truck-load of bricks in an otherwise deserted street, as we were heading off with the four-footeds for their morning constitutional in the Martyrs' Square. And if there was any doubt about his intentions, his shifty glare in our direction pretty much confirmed the truth, as the senior four-footed nonchalently cocked his leg against the frame of our portone. Ah well - nothing like a little permit-fr 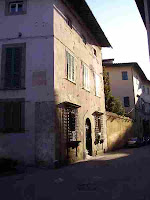 ee illicit construction work to get the year started!

Glorious sunshine, and the streets and squares of the town completely empty. A brilliantly blue sky, and a bite in the air that was exhilerating up until the point that it suddenly just became uncomfortably cold. A very light frost on the grass - which I hope is as bad as it will get for the whole winter, otherwise the citrus trees will be at risk. Pisa in general is several degre 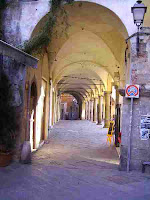 es warmer in winter than either Florence or Lucca (even though the latter is only twenty minutes away , on the other side of the Monte Pisano) which is why the Medici court used to base itself here during the winter months, and why we can have lemon and orange trees planted in the soil, rather than in pots that have to be taken indoors to avoid the cold. Up in Belforte, their lemon tree spends the winter in the middle of the laundry room, which is not the most practical of arrangements when you're trying to get at the washing machine!

Twenty minutes spent appreciating the aesthetics of the town in winter sunshine, and then home for much-needed coffee, and chocolate and almond cake, while the dogs luxuriate in the warmth from the underfloor heating. 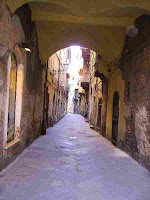 Upside-down Caramel Cream
Posted by Pomiane at 10:26 No comments: