Delicious sauces are ridiculously simple to make. I know James Peterson writes at fascinating length on the subject, and I love the images he conjures up of egg-yolks and oils working together to make complicatedly-structured emulsions, for example .......but, away from the pages of his deathless prose, the actual practice in the kitchen is quick and easy and capable of completely transforming what might otherwise be a rather dull offering on the plate.

My approach to sauces is very straightforward: some 'cooking residue' (which can

be either stock, or the bits left in the bottom of the roasting pan or the sauté pan - anything which has captured the flavour of whatever it was that was previously being cooked), some alcohol of choice (whatever you have to hand - I generally have port and vermouth ready to use in the kitchen in London, and marsala and house white in Italy, although you can also use a slug of whatever you're quaffing as Cook's Perk in the kitchen - and often , but not always, a slug of cream. That's the beauty of the process - the sauce can be adapted to whatever you happen to have available and might feel like including. Herbs? If you have them, why not? Cream? Yes, but not necessarily...

et to success - if indeed it even merits being glorified as a 'secret' - is reducing and reducing and reducing the combined liquid until it is a dense, coating consistency in the bottom of the pan. It will cling perfectly to whatever it is that you're serving, and the flavours within it will be complicated and rich and delicious!

An example: last night we were having duck breasts for dinner. Before sitting down to the first course, I'd combined in a small saucepan a cup of beef stock, along with half a cup of port and a generous slug of crea

m, stirred together and left simmering gently on the stove. Having cleared the first course, I grilled the duck breasts (approx four minutes per side) and then moved them into an oven pre-heated to 220 degrees C; all the while the sauce was bubbling away, not quite boiling but simmering quite energetically, and required stirring perhaps once every couple of minutes. Five minutes or so in the oven, and the breasts were ready to come out and sit under foil for a couple of minutes so that the juices would go back into the meat and not flood out when it was carved; meanwhile, I raised the heat under the sauce and boiled it down stirring constantly, until a wooden spoon drawn through it on the base of the pan left a clear line, and the sauce was almost glutinous in texture. A quick check for seasoning and adjustment as needed* and then the breasts were carved and plated, and the sauce spooned over each serving - a spoonful of richly dense sauce per serving is quite sufficient.

*only ever add seasoning at the end when you're going to reduce a sauce in this way; if you put it in at the beginning, then as the liquid reduces, the seasoning becomes much stronger and more concentrated than you had in mind. It is also at this stage that you should add any chopped fresh herbs that you might want to use to add an extra flavour element to your sauce.

Tagliatelle (fatta in casa) with a sauce of Tomato, Rosemary & Pancetta.

A lot of nonsense seems to have been written about this particular dish, and its exact provenance. Some will have you believe it can be traced back to Siena and a dinner in honour of Cosimo III, whilst others claim it is in fact a Zuppa Inglese (it isn't - they are completely different things) and thus shares the history of that dessert. Most credible to my way of thinking is the idea that in fact Tiramisu, as we know it, is a fairly recent invention and dates from Treviso sometime in the seventies.

When I was cooking professionally, I invariably used Carluccio's version, which includes kahlua and omits any whisking of either egg whites or cream. The result is unctuous and dense, and is well suited to an environment where food often needs to be physically quite robust. Looking further afield, Valentina Harris, La Hazan, and Alvaro Maccioni all include beaten egg-white, which lightens the end result, and Claudia Roden is quite disappointing, with her rather uninspired two-layer-only version. In trawling through the archive, I came across a venetian recipe, which included crystallised fruit within the cream layer (doesn't do much for me - crystallised fruit of any kind, I tend to avoid). And then I found the Pradelli version, quite different from all the others, as in fact he makes a zabaglione base, into which he then incorporates the beaten cream and mascarpone and egg-white. The end result is much lighter than the others, but without losing the dense quality that is fundamental to the quality of the dish. I recommend it...

1. In a double boiler or zimmertopf, whisk together the egg yolks and sugar until the mixture is pale yellow and forms a ribbon behind the whisk. Over medium heat, continue stirring for four to five minutes, adding first the Marsala and then the Rum. At the end of this time, the mixture should be thoroughly homogenised and the velvety density of a custard. Remove from heat.

2. Whisk the Cream until thick, and then beat into this the Mascarpone. When thoroughly incorporated, fold in the zabaglione mixture. Beat the egg whites until stiff, and then carefully fold these also into the zabaglione-mascarpone mixture. Set aside while you make the biscuit base for the Tiramisu.

3. Take a shallow rectangular dish about 4" x 6" and line the base with Sponge Fingers which have been briefly dipped in Espresso (NB: the biscuits should be moistened only - if they are too soggy, the texture of the finished dish will be sub-optimal, and the excess coffee will leech out and be discovered as a puddle at the bottom of the dish, which is undesirable). To cover the base of the dish should use up half of the Biscuits you have available.

Refrigerate for at least twenty four hours before serving, and just before you serve it, sprinkle the surface with Chocolate Powder.
Posted by Pomiane at 09:31 3 comments:

I thought I'd do some research. We first discovered Falanghina a couple of years ago - more rounded on the palate than the white wines from further north like Frascati or Pinot Grigio, but still with an agreeable degree of crispness. Only patchily available until recently - although that is as much a reflection of the re-stocking eccentricities of enotecas and italian supermarkets as anything else - now, you can barely move for falling over the stuff! Which is no bad thing...

And the research was well worth the effort, since it appears that Falanghina is no more n

or less than the famous Falernium wine so beloved of the Romans, two thousand years ago. Apparently, there was a particularly good vintage in 121 BC, which went down in the annals and was spoken of with awe for decades - if not centuries - to follow. I'd like to think I recognised the name from all those years of wading through Cicero and Tacitus, but I suspect it's more likely the influence of Robert Harris's imperial pot-boilers...

e Falanghina grape derives etymologically from the latin 'Phalernimum' - i.e from Falerno - and there's some idea that it was used at that time to make a sweet wine, although I haven't found any supporting evidence for that particular assertion. The idea of ancient wines being naturally sweet always seems unlikely to me, given some experience of the sort of wines produced in primitive communities in Greece, where the process is presumably unchanged from several millenia ago. The end result tends to be thin and harsh, with every inducement to add things like honey and herbs in order to make the stuff drinkable at all...

Anyway, it seems that Falernium continued to be popular in its various guises right through until the early twentieth century, when it was suddenly practically wiped out when Phylloxera hit the vineyards of Campania, and it disappeared off the map for a good fifty years or so. Painstakingly reintroduced over the past quarter century, it seems now to have clawed its way back to a position of some eminence. At the scrubbing-alcohol end of the scale, for five euros a bottle it makes very good house wine....and if you want to push the boat out and indulge in a more sophisticated version, for a few euros more, then the choices are absolutely excellent! Highly recommended... 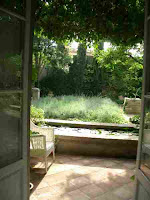 Meanwhile, we're having the hottest summer here that we've had for five years...the Technical Department is sweating it out at the top of a scaffolding tower as he restores the ceiling painting in the Loggia, and every so often it's necessary to resort to standing shoulder deep in the lily pond, quaffing ice cold glasses of Kir (made not with Cassis - we've run out - but with a local version made with Myrtle Berries; slightly medicinal in flavour, but not entirely unpleasant for all that...)

Capponi (a beautiful red fish, one of the Gurnard family) cooked in sephardic fashion.

Passion Fruit Tarts.
Posted by Pomiane at 09:50 No comments: