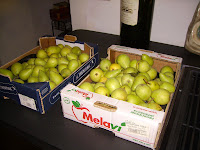 A recipe from Anne Willan, I first tried this in the early eighties, when I was dipping into her 'French Regional Cooking' as my project over Christmas in St. Michel one year (which reminds me ... her version of Pintarde aux Choux from the same book was also particularly good, and long overdue to be dusted off; definitely one for the colder months toward the end of the year). The pear recipe re-surfaced in Willan's 'French Recipes' from the Books for Real Cooks series - a gem, if ever there was one - and the current household glut of pears prompted me to make it for dessert a couple of evenings ago.
It isn't the easiest of dishes to get right - it must have been a fluke that it came out well the very first time I made it, as I didn't have a lot of experience with soufflés at that time - but it repays the effort of trying. Light, creamy and delicious. The secret, I think, is to stick absolutely unwaveringly to the recipe, with regard both to quantities and cooking time. Willan's version was for one large soufflé, which I never particularly like, as the process of serving has a tendency to ruin the whole effect, and so I've re-worked it for individual soufflés instead (made in 10cm diameter ramekins).
Twelve minutes and a few seconds of cooking, exactly!

1. Peel and core the pears, and liquidize them along with the lemon juice. Heat in a small pan over medium heat for about 10 minutes, until the purée has lost most of its liquid, and will keep its shape on a spoon. Set aside to cool.

2. In a double-boiler or simmertopf, heat the milk; in a bowl, whisk the egg yolks and 2 oz of sugar until they are pale yellow, then mix in the flour and cornflour. Pour onto this the heated milk, and mix together, then return the contents of the bowl to the double boiler, and cook, stirring for five minutes or so, until the mixture (which is in fact a pastry cream) has become quite thick.

3. Fold into the pastry cream the cooled pear mixture, along with the brandy; cover with clingfilm, to prevent a skin from forming, and put in the fridge for up to three hours.

4. Heat the oven to 220 degrees C. Butter, or Trennwax, four individual 10 cm ramekins, and place them in a deep roasting pan.

5. Beat the egg whites until stiff, adding the 3 tbs of sugar for the last ten seconds or so of whisking. Mix a quarter of the beaten egg white into the pear/cream mixture, then fold in the remaining egg white.

6. Fill the ramekins to the brim with this mixture, smooth the surface of each one with a palette knife, and then run the tip of your thumb around the rim of each ramekin, leaving a shallow indentation around the inside of each one.

7. Fill the roasting pan with hot water about halfway up the ramekins, and bake in the pre-heated oven for twelve minutes.

8. Remove the soufflés from the oven and sprinkle with icing sugar before placing each ramekin on a dessert plate. Serve immediately.
Posted by Pomiane at 10:49 1 comment: