Wine Tart from the Vaudois 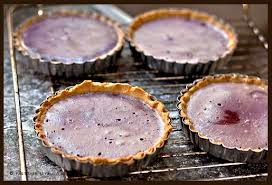 This is my version of something which comes from Fredy Girardet - and both the recipe and the author are a splendid new discovery for me. These past few months, I've been aggressively re-visiting the work of 'starred' french (and french-ish, extending into Belgium and Switzerland, and even into the UK, with the Roux brothers) chefs from the eighties, which were IMHO a culinary high-point. Girardet is amongst the previous unknowns (to me) from that period, and his 'Cuisine Spontanée', of which I tracked down a copy in January, has seen much use in my kitchen over the past few weeks.
These days, it's rare that I come across a new recipe which I can't immediately place as some kind of variation on a familiar theme - roasting, braising, boning, baking...the number of techniques available for use is limited, and within them, the changes are generally rung in the form of relatively subtle new combinations of flavours and textures. And, after a while, everything can be pretty much seen to be a first or second cousin of something I know from before - which might sound boring, but in fact is anything but...think of them rather as old friends that one's happy to rediscover!  This recipe, however, I can relate to nothing I've previously come across. The pastry case is not blind-baked...a detail which I found almost sacriligious, and which I mistakenly chose to ignore the first time I tried the recipe...cooking is brief and at a fierce temperature...the filling contains no eggs, and rather than being 'set', is effectively 'melted' inside the pastry shell, and then firms properly only as it cools down after cooking.
On a practical level, as long as you have the pastry ready in the fridge, then this is another of those dishes that finds a home in the 'Oh, God - it's that time already, and I haven't even started anything for dinner yet' category. Pre-heat the oven, roll the pastry, mix the filling...all of which might take five minutes, and then let it bake for a quarter of an hour and you're done. If you're really running late, then this is best made as individual tarts, which don't have to cool down completely before being served; if you make a large tart, and then try to slice it before it has properly cooled, then the filling will flow as you cut into the pastry shell, and the result on the plate is less than picture perfect. It all tastes the same, though...

For two individual tarts (for one 8" tart, multiply the filling ingredients by 150%):
Ingredients:
Pastry (made with 10 oz flour, 8 oz butter, a pinch of salt and 50 ml cold water - this is enough to make many tart shells, both large and small, but these are the proportions I use to make a standard batch of pâte brisée, which goes into the fridge and generally gets used up over a week. In his version for this recipe, Girardet uses a pastry made with baking powder...don't. I've tried it and the result is sub-standard.); 120g sugar; 10g flour; 1 generous tsp ground cinnamon; 100 ml white wine; 10g butter.

Method:
1. Heat the oven to 250 degrees C.
2. Roll out the pastry, to line two individual false-bottomed flan rings, which have already been greased, and placed on a baking tray.
3. Mix together the sugar, flour, cinnamon and wine. Carefully pour this mixture into the two pastry cases.
4. Finely dice the butter and scatter it over the surface of the two tarts.
5. Place the baking tray at the bottom of the pre-heated oven, and leave to bake for about fifteen minutes; keep an eye on the tarts as they cook, to ensure the pastry doesn't go too far.
6. Once the pastry has turned a deep brown and the filling has bubbled inside the pastry shells, remove them from the oven, and set aside to cool down for at least half an hour, before serving.