A Plague of Locusts...

...will presumably be the next thing! 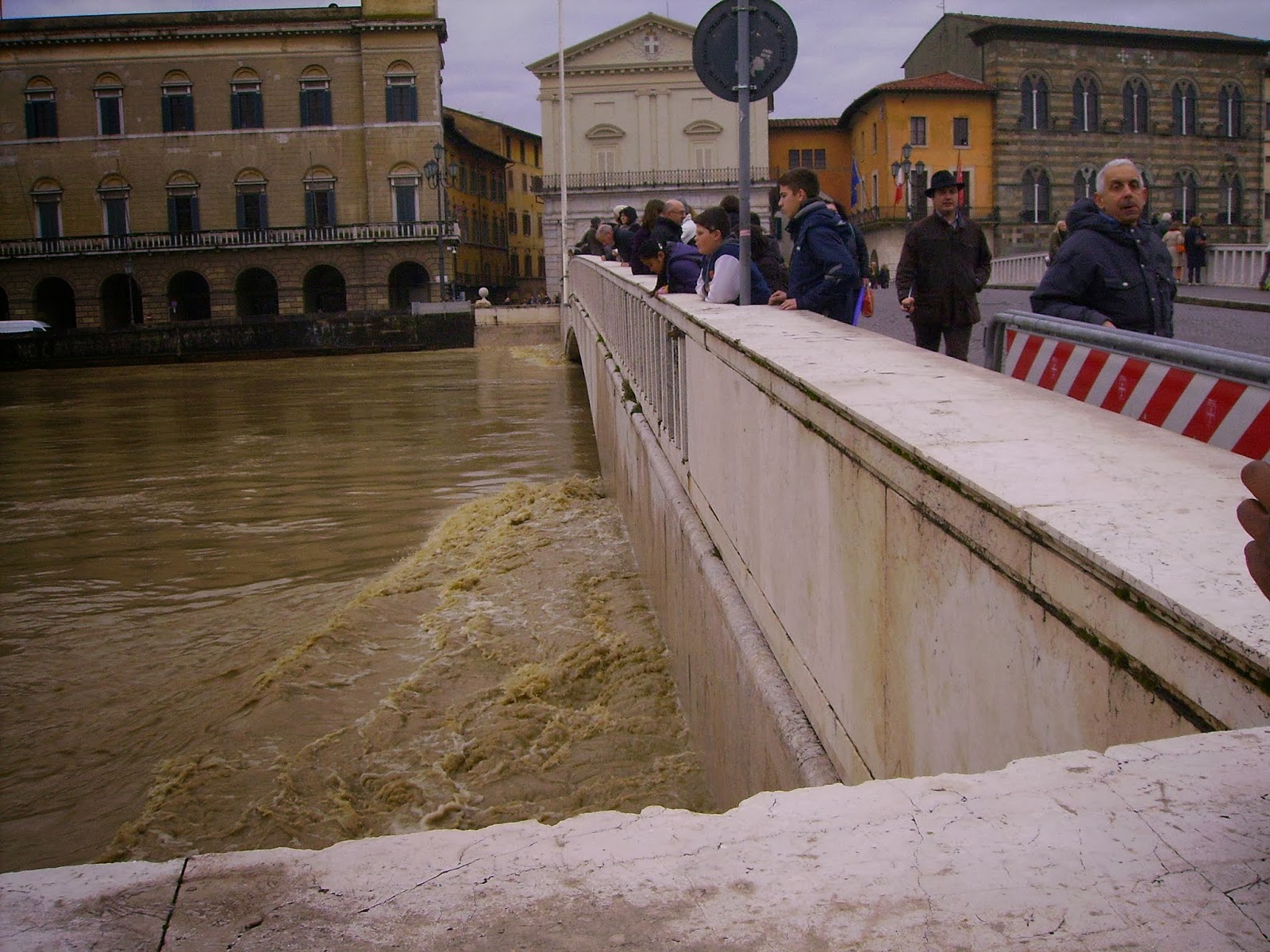 At 10.00 this morning, in the middle of preparing a shamefully late breakfast for the Belfortini, who were here for dinner last night, and to stay overnight before heading off to the airport this morning, the power supply suddenly failed...in mid toast-making. Not just a circuit taking it into its head to pop its fuse - as anybody familiar with Italian electricity will know happens with astonishing regularity - but the whole bang-shoot. We had no power at all, anywhere. No sign of life in the system, and even the uber-fuse box out in the lane was dead as a dodo. For some reason, I'm not sure why, we assumed it was a power cut, affecting more than  just us, and we got on with organising breakfast as best we could using hob and grill and anything that ran on gas rather than electricity. TD bemoaning in the background the fact that our new generator, which has recently been installed at one end of the cantina, is still waiting for the plumber to come and attach it to the gas supply, awaiting the moment TD foresees when power blackouts will become the norm as National Grids the length and breadth of Western Europe give way beneath the combined pressure of increased use and decreased maintenance. 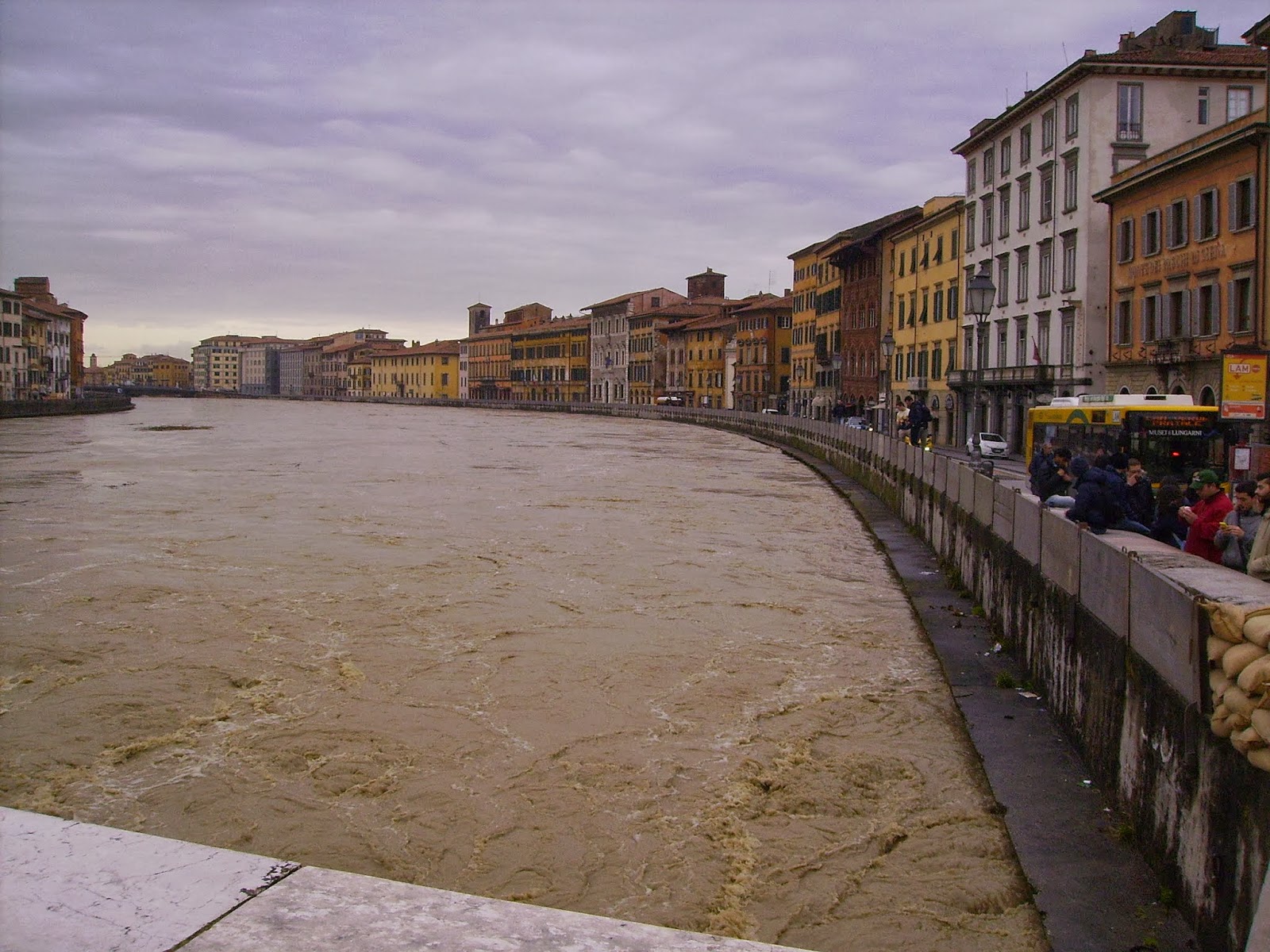 Breakfast completed, we had time for a stroll beyond the piazza, to see quite how much of the town was affected....only to find that very little of it seemed to be without power, at all - although, it was odd that so much of the place seemed not to be functioning, with half the shops on Borgo Largo closed and shuttered. Which seemed strange for a Friday morning. And which prompted a call on our return to Enel, to establish whether indeed it wasn't just we who were languishing in darkness.

Meanwhile, I departed with the Belfortini to drive them to the airport...only to find the Lungarno full of Carabinieri vehicles with flashing blue lights, and  the naval section of the vigili di fuoco, and vast hordes of the Italian military in drab camouflage, all milling around. Above the parapet of the Ponte di Vittoria  I glimpsed the Arno at an alarmingly high level, and realised that the past 48 hours of non-stop rain must have precipitated (literally) a state of emergency, and I drove to and departed from the airport in haste, since I didn't want to get caught on the wrong side of the river if they suddenly closed all the bridges. Which they were in the process of doing as I headed home, and it was only by a long and circuitous route via the one bridge that was still open that I managed not to be caught, and eventually made it back to the house. 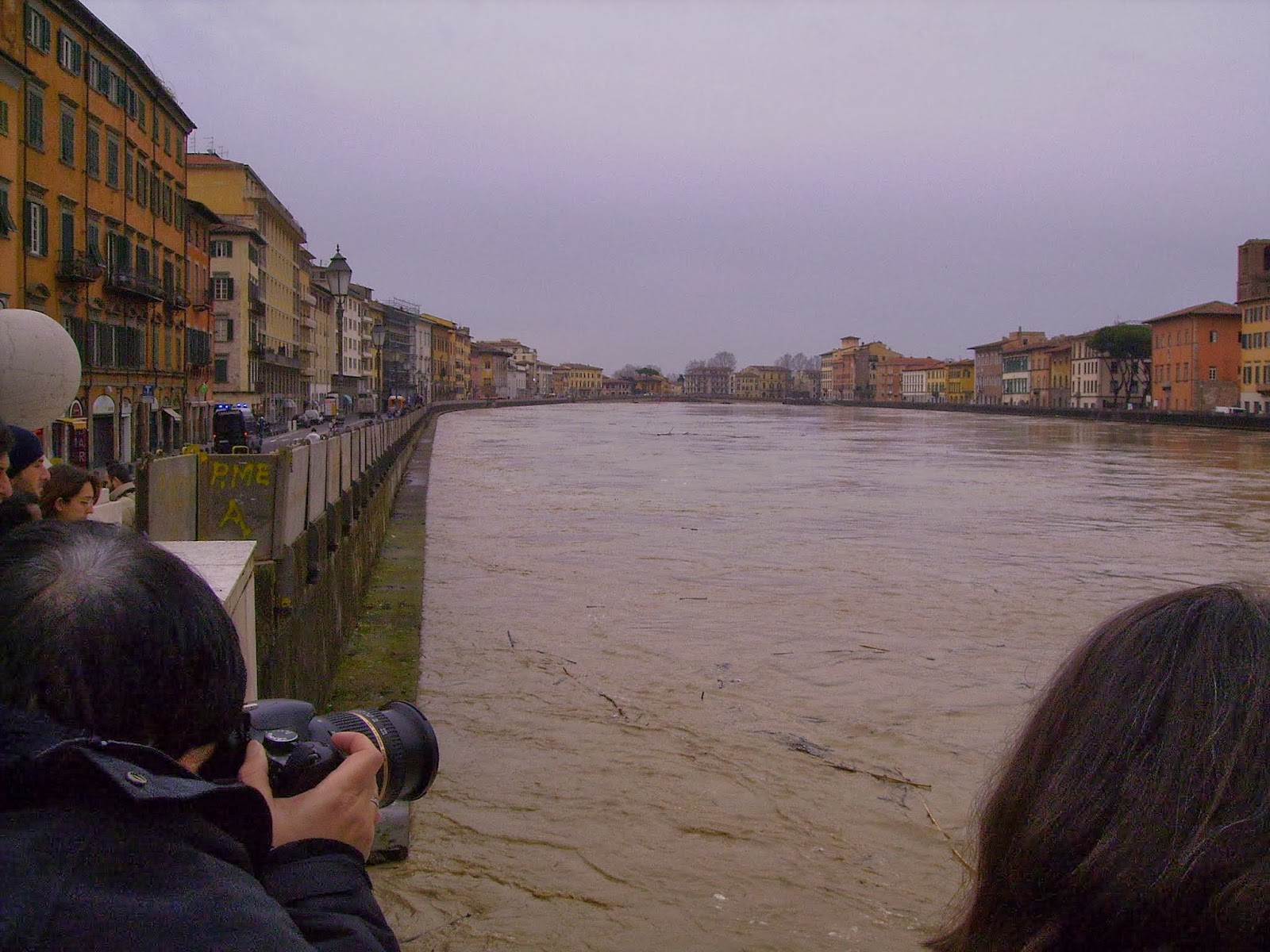 To find that TD had, he thought, apparently reported our lack of power to Enel, whose response suggested that whatever the problem was, it wasn't general...and therefore we would have waited for a long time had we continued to assume that Enel must already know about and be in the middle of fixing whatever it was that had gone wrong.

With four-footed in tow, we thought we'd go and survey the river level, and in fact encountered the Enel repair man arriving just we set off (which is pretty impressive, since it can't have been more than fifteen minutes since the fault had been reported!) and we left him to it, as we headed off once more through eerily deserted streets in the direction of the river. A notice on the door of the School at Santa Caterina announced that the government, in light of the flood danger,  had ordered the closure of  schools and university and all public buildings, and indeed were advising everybody with any kind of choice to stay at home and keep away from Pisa Centro. Which explained much. 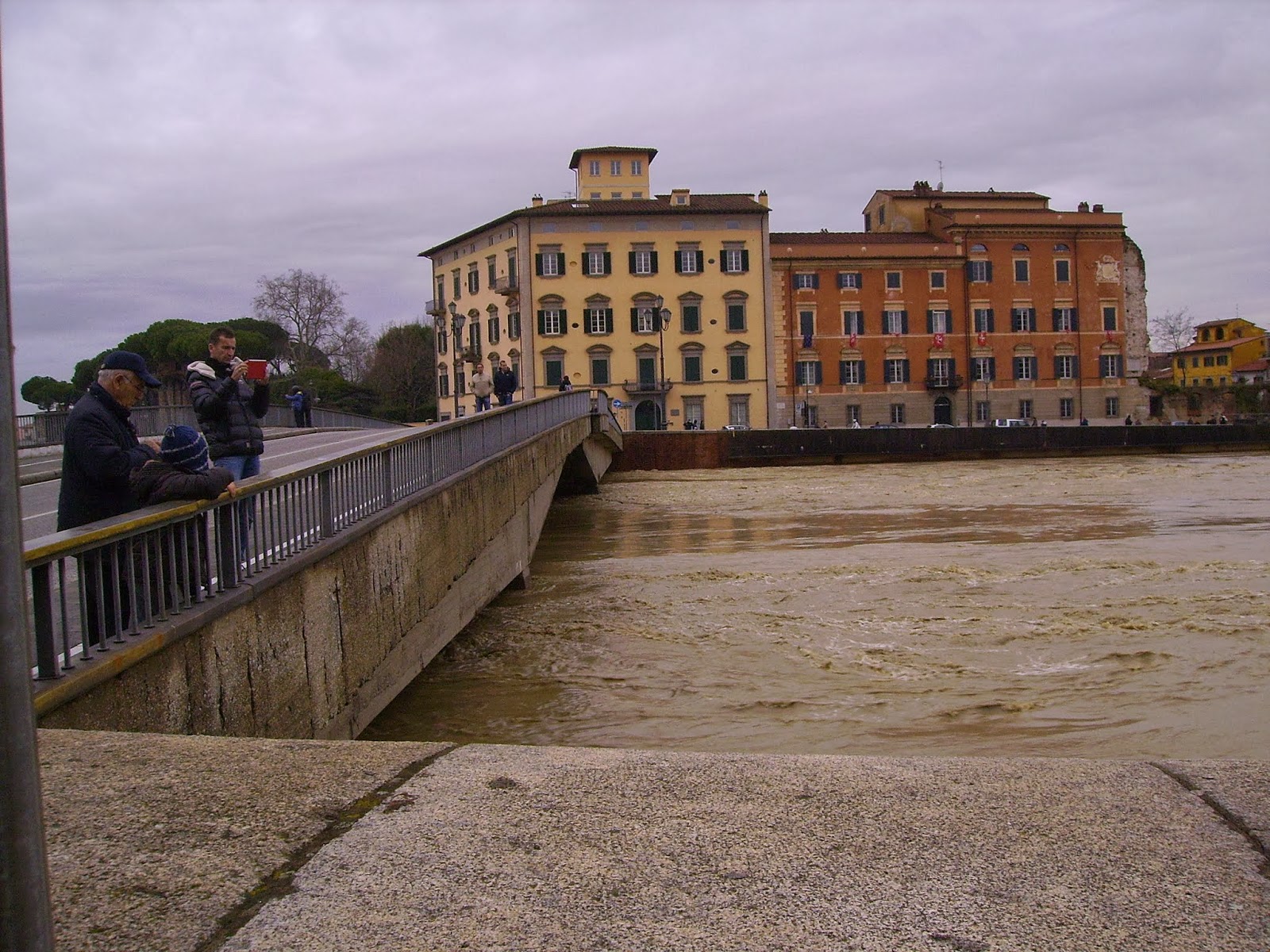 The river level was impressive, and for the first time we saw that flood boards and sandbags had been employed all along the river, to raise the level of the river wall by an additional fifty or sixty centimetres, as a defence mechanism. The river was in full spate, forcing islands of driftwood to collect against the bridges, where the spans no longer allowed sufficient headroom for flotsam to be carried along, and indeed where the height of the river threatened shortly to overflow the bridges themselves. But, in fact, by the time we got there, the 1.00 high water was already past,and it seemed clear that the immediate danger was over; as the barriers were removed from either end of the Ponte di Mezzo, we headed home, to find out where Enel had got to.

Which was up a ladder. To switch off the power supply, preparatory to replacing the section of main supply to the house which, it appeared, had worn through and shorted, causing  immediate loss of power and only a small fire in the process. 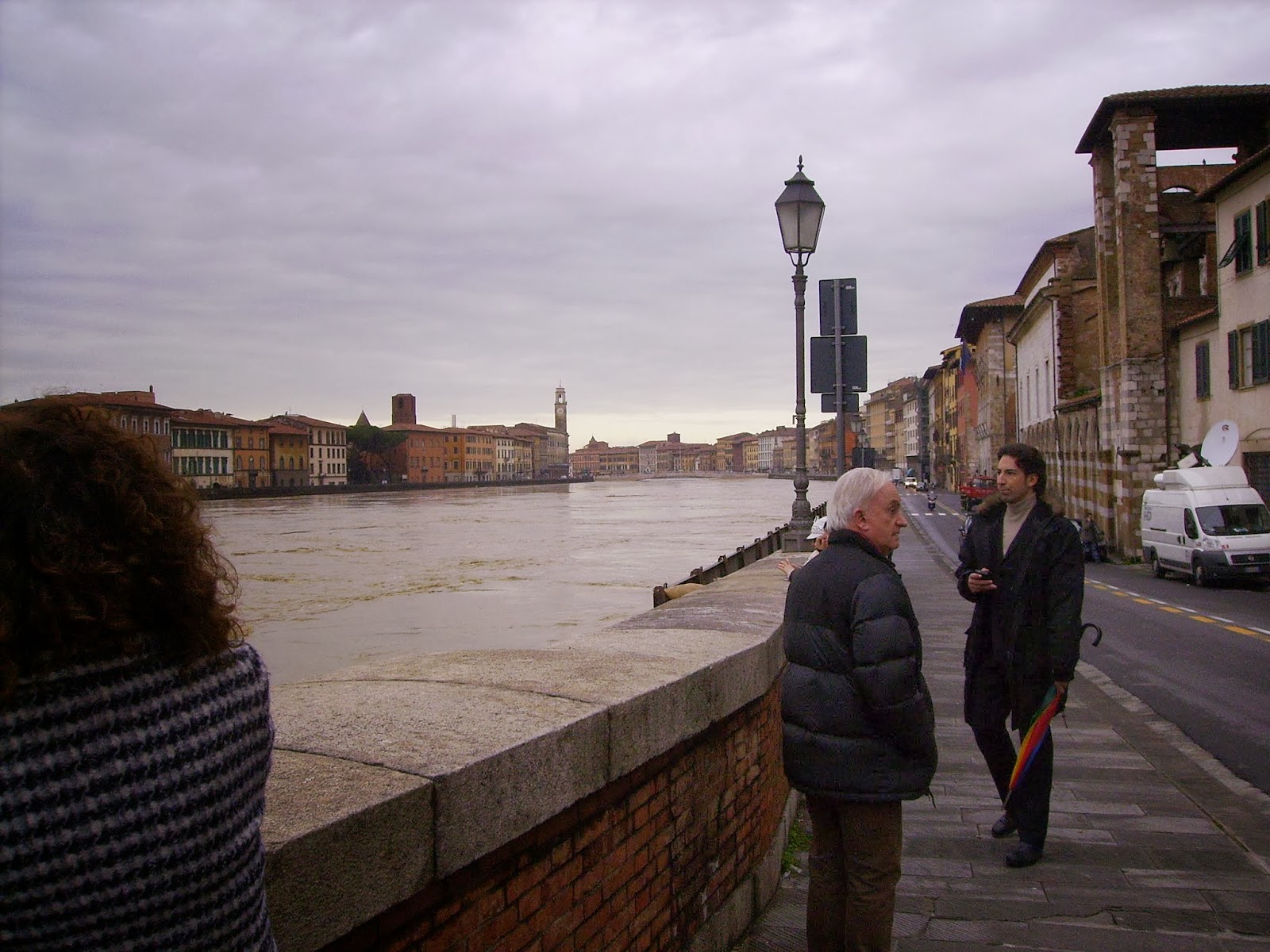 And so, as the rain started up once more, we left them to it, and went indoors to sit in candlit mid-winter gloom, and await further developments. I had my doubts that we wouldn't have a rain-stopped-play event, since Italians (men particularly) don't like getting wet or cold or muddy, and the steady rainfall that had now set in was quite likely to overcome any intention to reconnect the power supply. But it didn't, and they were stalwart, and suddenly, after about an hour, the lights suddenly and without warning came back on again.

So, we've already had fire and flood, in the space of half a dozen hours. Is it locusts that come next, or is it frogs?

In fact, if anything, I suspect it will be a re-run of the flood, as the rain continues, and we have the next high water in about eight hours from now.

Plaice, on a bed of braised leeks, with fish and red-wine sauce.

Vacherins with Crème Chantilly and Blackberries.