...has found some new friends. 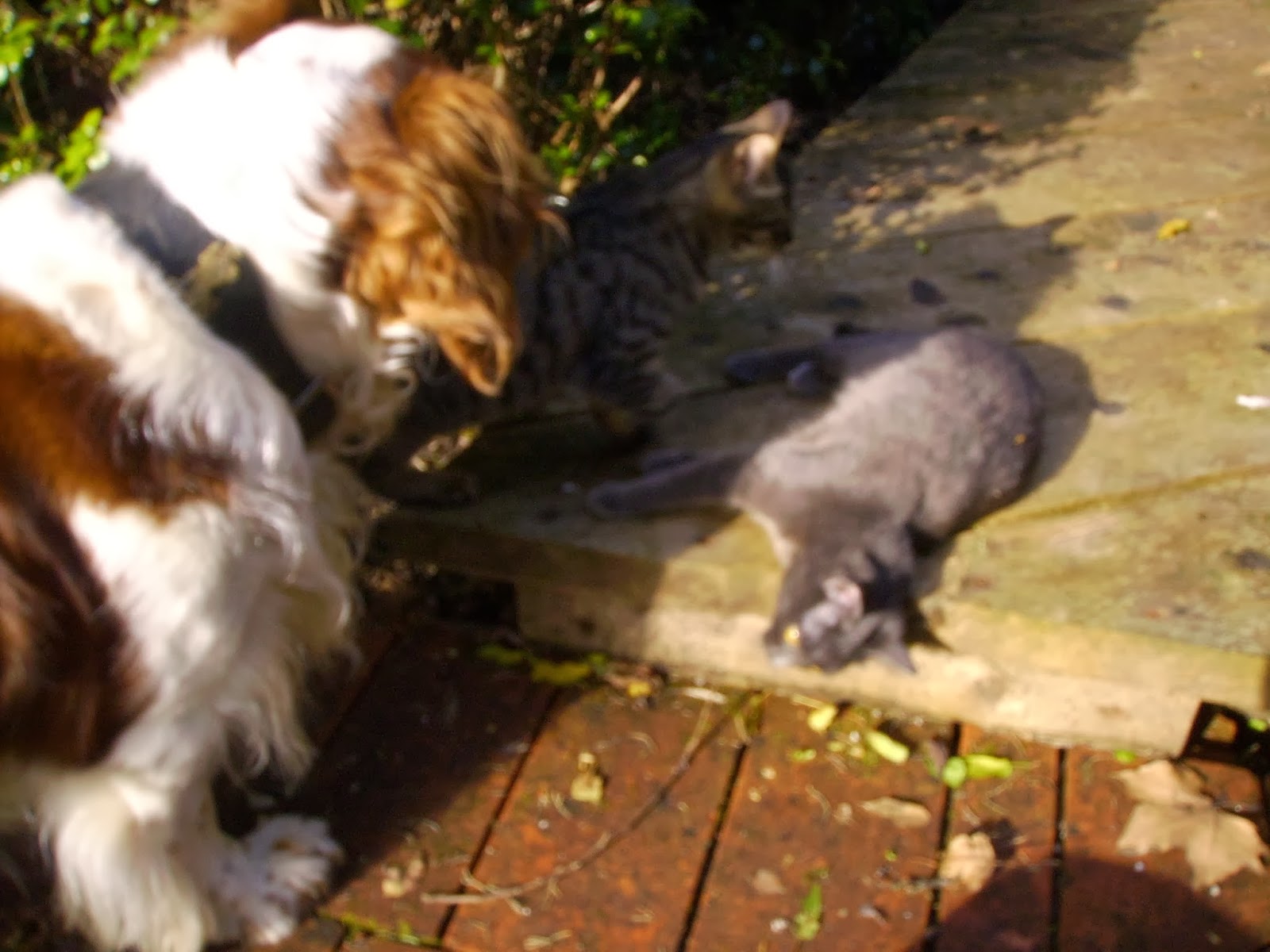 The two kittens from the Teatro Lux, next door. One a sleek, elegant dark grey, and the other a very fine brindle, which in italian, rather fetchingly, is called 'tigrato'. History does not relate what happened to their siblings - there were originally five of them, I think - or indeed their mother, all of whom were in residence last summer, and we would sometimes see numerous pairs of bright little eyes gleaming at us from the darkness of the Teatro boiler room, which is behind the gate which leads off our courtyard. Whilst it would be good to think that they all have good, warm, comfortable homes with loving new owners, the standard of care these two get from the people at the Teatro - generally shut up 24/7 in a windowless concrete space, either with constant electric light or else in pitch darkness, and fed in industrial quantities only every two to three days - suggests otherwise. Probably better not to dwell on that detail. Anyway, these two appear to be the remaining cats-in-residence. 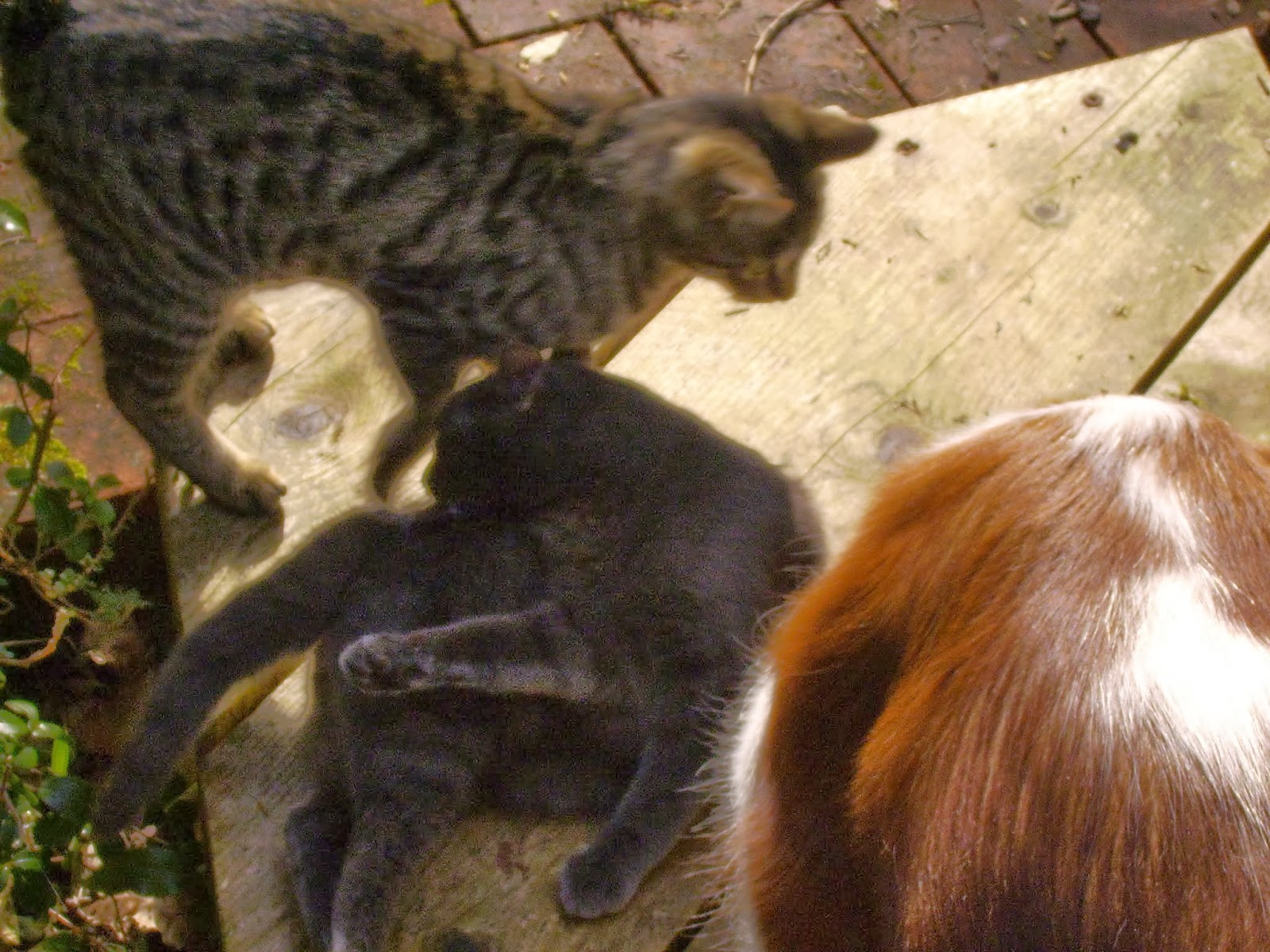 And, over the past few weeks, they appear to have been indicating a preference for a new residence, and we have often found them at night on the decking terrace, snuggled up against the warmth of the stove pipe, and, after a while,  with their faces pressed against the windows, watching what was happening inside the house.
Four-footed was fascinated, although I expected ructions were they ever to meet, since he gives short shrift to any cat foolish enough to wander into his garden when he happens to be taking the air.
I started to give them milk, on occasion, mindful of their erratic feeding schedule - although they sometimes seemed more interested in company and in exploring beyond the magical windows than in consuming the milk. 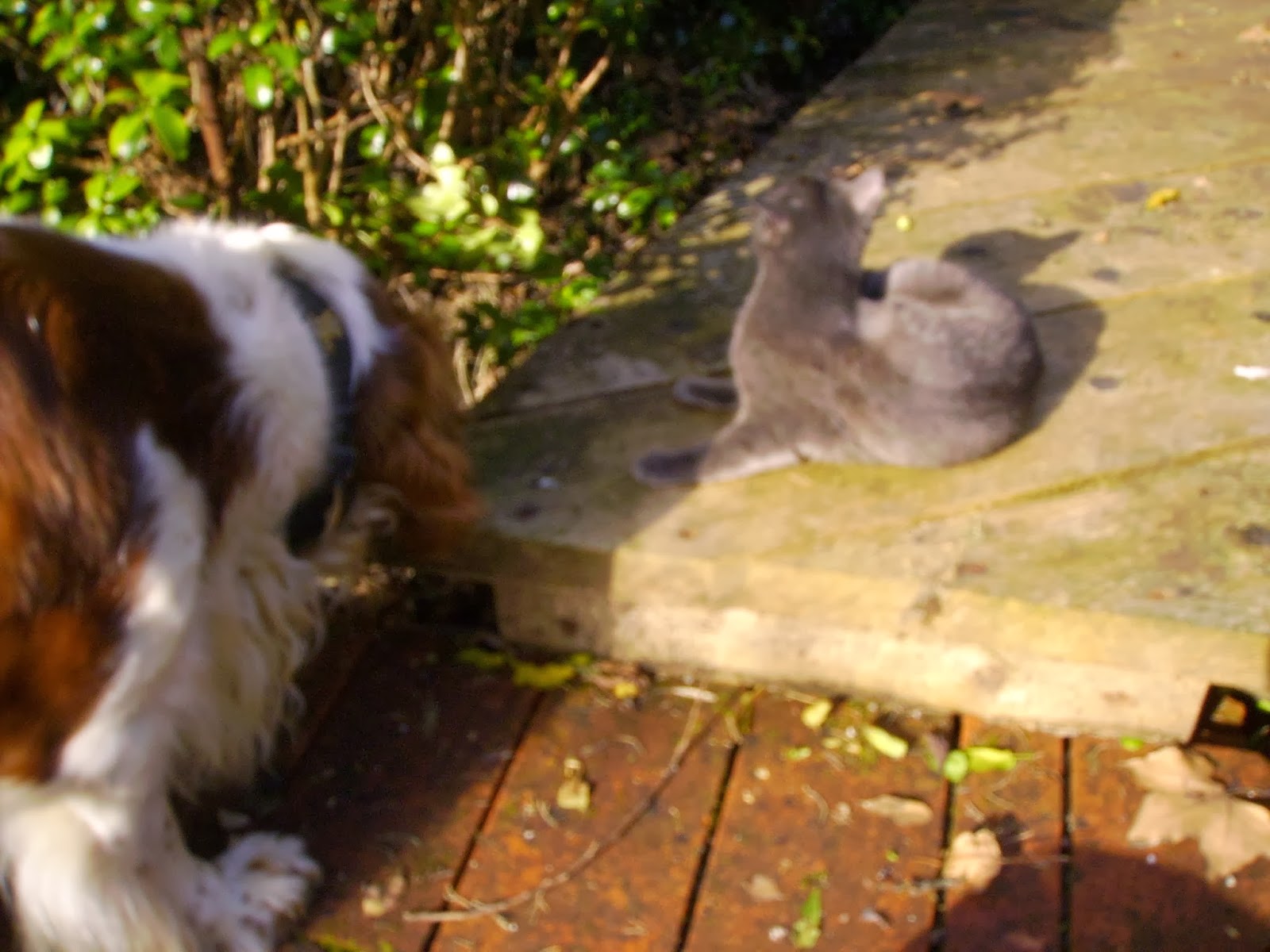 And then, on one occasion, I opened the french windows onto the terrace, thinking it cat-free, and four-footed wandered out, only to find that the brindle cat had been curled up under the over-hanging branches of the orange tree at the top of the roof, and a cautious encounter took place. While I watched, half-thinking I'd witness either a dash across the rooftops of cat pursued by a welsh springer, or else of said welsh springer plunging foolishly into the courtyard below. Neither event occurred, and instead there was a careful (on cat side) and tail-waggingly excited (four-footed) touching of noses, as they made each other's acquaintance. All of which was fine.

Following which, several days later, when the team arrived to plant all of the new trees (yes, they are all in, and look splendid!), I heard feline complaint from behind the door to the cats' concrete cell, which opens onto the lane, and opened it, to find the grey cat there, clearly intent on joining in. Which it proceeded to do, watching as the trees were planted, and socialising intently with four-footed at the same time, rubbing against him, and flirting outrageously, rolling on her (? I'm not sure) back, tummy exposed, and batting at the dog's nose with a free paw. 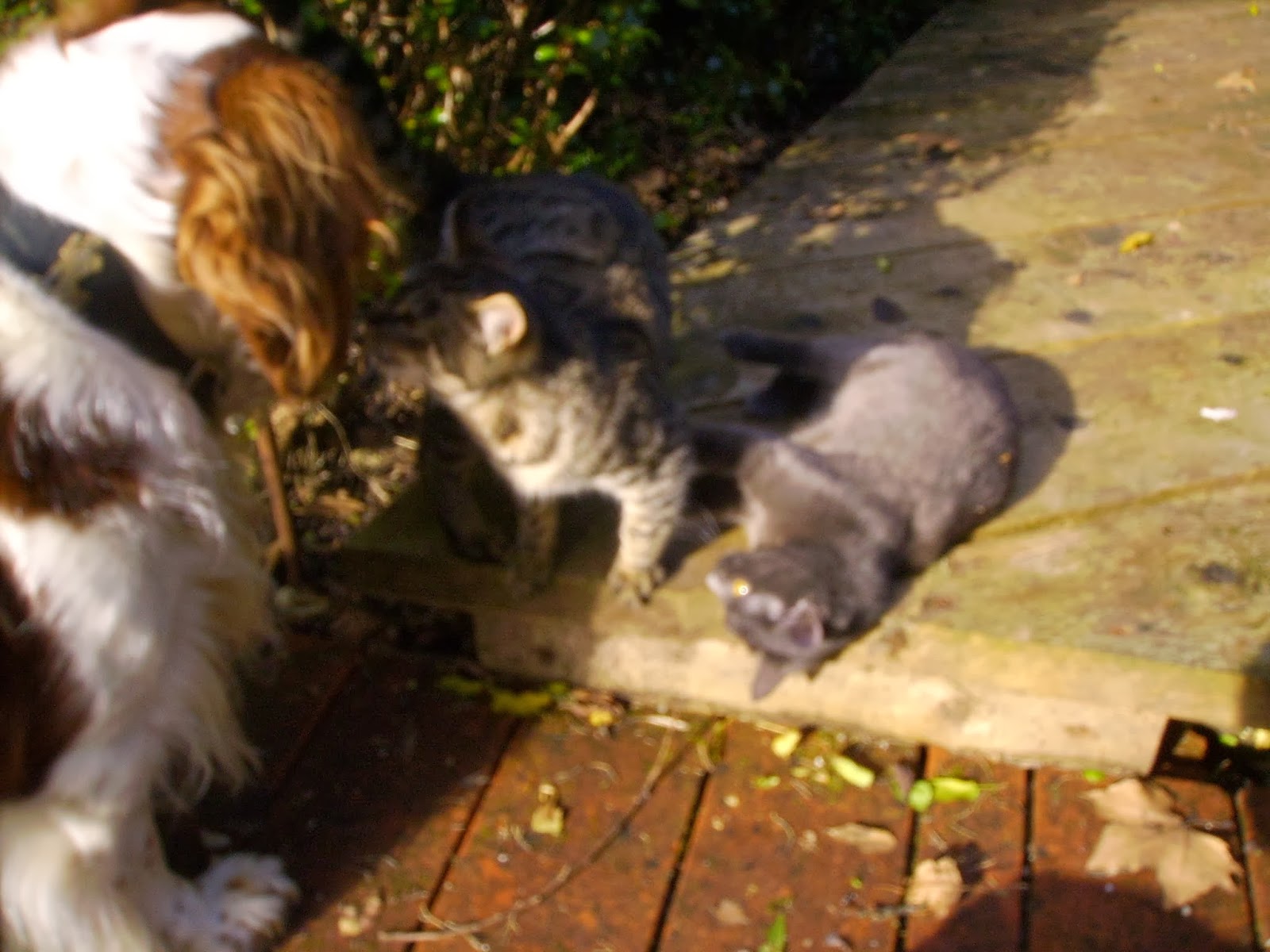 The long and the short of it is, I think, that the cats are bored. I let them both out of their prison yesterday, and they and the four-foooted had a fine time, playing in the sun and generally enjoying themselves....and then, when four-footed accompanied me to do some work in the old orchard - which the cats probably thought too far-flung for comfort - the cats remained back near the house, and watched as the Technical Department worked on knitting together the bits of fence which needed repairing post-tree-planting (we'd decided in the end that it was easier to take apart the fence, in order to plant the mature catalpas as from next door, and then to repair the fence around the trees).
When it came to bedtime, the cats showed a marked reluctance to go home for the night, and I discovered the truth behind the phrase concerning the difficulty of herding cats - I could get one comfortably behind the door at a time, but never the two of them at the same time, and in the end neither of them would come close enough to be picked up and coralled. So, they stayed out all night, and in fact I think they camped out in the barn, making themselves comfortable on the chair cushions. And, this morning, on four-footed coming out of the house, they emerged from amongst the escallonia, and came running up for attention. I'll take them home later today, as they have to realise that 'home' is where the food comes from, and they don't actually live here, much though they might think it a preferable idea to their current arrangement.

Tonight's dinner (for us):

Poached egg on a bed of onion and calves liver.