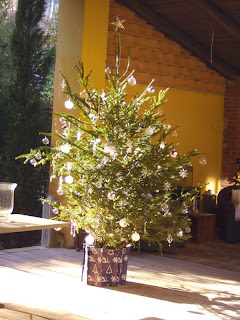 seems to have begun early, this year. By Friday morning, even shut away as we are from the World, a holiday calm had perceptibly descended on the town, and lots of shuttered windows on the Piazza suggest a general exodus has already happened...with a lot of people probably not planning to return until ebufana, after Twelfth Night. This fortnight is always a wonderfully ramshackle period in Pisa, with some shops and restaurants open on some days, but not reliably so, and even those which are open seem to be in mellow, party mood...business only being a side issue, somehow. 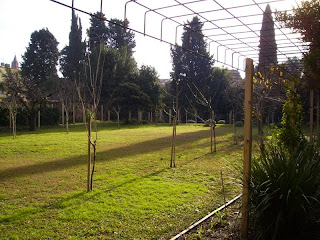 The sun came out. Which was welcome after the generally damp and dismal December we've had up until now. Slightly soggily, I finally managed to plant all of the arabis caucasica - which means that that part of the garden has been transformed from primal nature reserve into something which now resembles an unruly 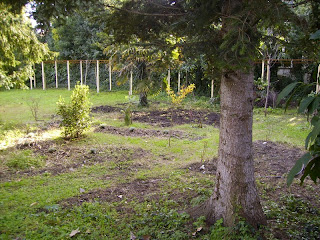 allotment; the idea is that by June it will be a dense carpet of small white flowers - and I've also put in ficus repens against about half of the posts on the new pergola. Which is finished! (Well, all apart from half a dozen posts, which Technical Dept says he'll have to move, as GianCarlo ruefully admits he made a pig's ear of his measurements on that section, and TD thinks the thing might collapse under the weight of the grape harvest, come September.) 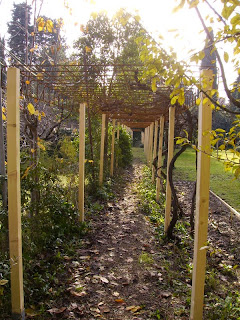 For the most part, though, it looks splendid, and I'm itching to get on with planting a whole new batch of climbing roses and clematis which are due to arrive in January. 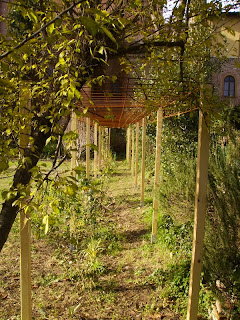 As well, of course, as moving all of the plants which are now in entirely the wrong place, as - when I planted them when we first started this garden, three years ago, now - I had to guess more or less where the pergola posts were going to be be, and sightlines and geometry have revealed that I didn't always get it right. I have one complete bed of roses which is going to have to move in its entirety three feet to the west of its current position, and next spring is going to see a magnificant display of tulips right where a path is intended to go, under the South Pergola. Oh well: Rome....built...day...etc 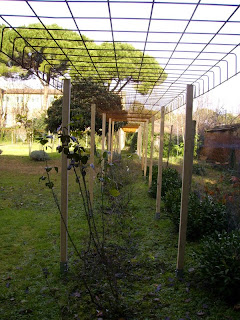 We had a splendid dinner with the Brancolis on Monday, at a new place they've found in Lucca, in Via del Moro. Excellent wine, good food, an over-garrulous patron , and a bill at the end of it which was so low that there's no way the business can survive at that rate! We plan to go again, soon, while it's still there and we can. 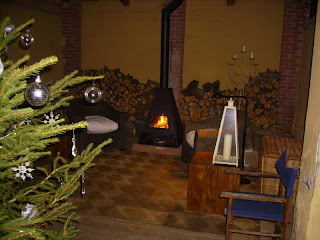 And we've managed a couple of evenings round the fire in the barn, with the requisite mulled wine, mince pies, sausage rolls (made with Luganega Sausage, which is spicy and delicious, and perfect for the task), and chestnuts roast on the glowing embers. The locals probably think we're completely nuts, to be sitting outside in late December, wrapped in coats and scarves (them, not us....we're much more British and hardy about it all...perhaps going as far as a sweater and a pair of socks) as we hug the fire and glug gluwein. But then, as a celebration of cultural diversity, there are definitely less self-indulgent ways of doing it! 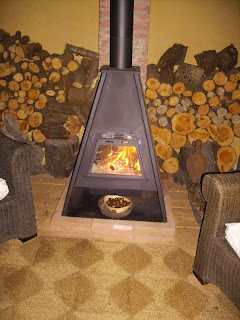 Pineapple Sorbet
Posted by Pomiane at 12:58