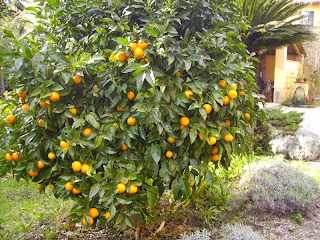 In fact, I'm not quite sure where it went to. Not five minutes after the tree had gone up, it seemed, it was coming down again (and is now planted over near the white grape arbour - although the apparent absence of any roots to speak of suggests both that this is an act of significant optimism, and that the tree appears to have managed to look as good as it did for the three weeks it was decorated and in its pot in the barn was more by luck than judgment!). Ebufana has come and gone, and now everybody has heaved a sigh (either of relief or of appetites satisfied) and the World, as of this morning, is now going about its business once more. 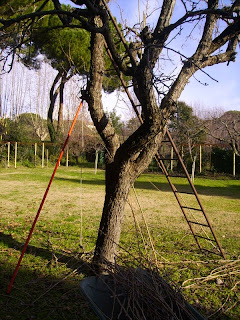 In a period significantly dominated by Pheasant, and Partridge, and Guinea Fowl, and Tarte au Chocolat, and Marron Parfait, and Christmas Pudding, and Caramel Sauce, I did actually (probably necessarily) get a reasonable amount of garden tasks out of the way. Not only pruning all of the new fruit trees (which takes only minutes, since they're so small - but gratifyingly provides a sense of job-done at the expense of very little effort), but also managed to prune the large pear tree. This is one of the jobs I hate - it takes ages, and is very fiddly, and ends up causing back-ache and neck-ache, with significant risk to life and limb, as I clamber around amongst the upper branches. Fortunately, the Seminary next door is deserted at this time of year - had it not been, then I suspect some adolescent italian vocabularies would have been enriched by a variety of good old anglo-saxon expletives, by the time I was eventually finished. Until this time next year, at any rate. 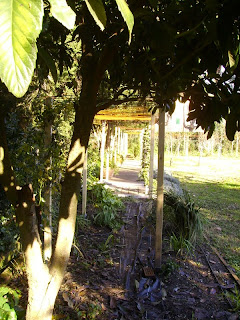 More or less, the weather has been good. In Belforte, where we were for three days over Christmas itself, we spent days shrouded in fog, and stayed indoors, toasting the season in venerable vintages, and ourselves beside the blazing fire. Back down in Pisa, we've had days of intense calm and winter sunshine. Four-footed has had endless hours of chasing tennis balls, and getting himself gloriously dirty, as I've dug the new flowerbeds alongside the South Pergola and he has 'helped' - followed by a daily bath, which he adores...particularly the bit after he has patiently lifted his paws to be rinsed, each in turn, and then gets enfolded in a towel and energetically rubbed down. 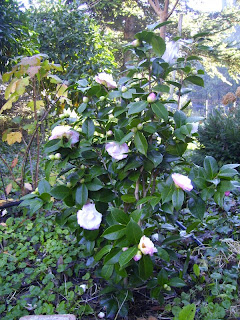 The camellias are just starting to come into flower - and should remain so through March - but, apart from the blossom on the lonicera frangrantissima, everything else in the garden is resolutely dormant. I'm torn between wanting spring to get a move on, and wanting to have enough time to complete all of the 'winter' tasks which yet remain. Actually, I'm nervous that we'll have another cold spell like last February, when it was impossible to do anything other than stay indoors, and peer at the iciness beyond the frost-rimed windows. Oh, well - nothing one can do about it, either way.... 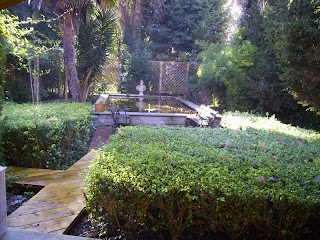 Is at the Brasserie Julien, in the rue du Faubourg Saint Denis. (If we manage to get to the airport in time - Technical Dept is deep in something else currently, so it might be a close-run thing!)