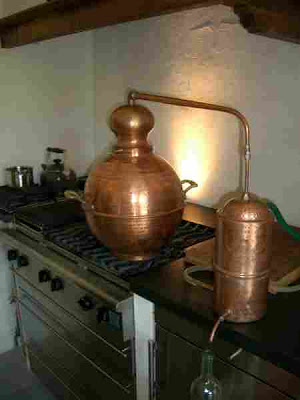 For the past two days, the kitchen has assumed its regular temporary identity as a distillery, as grappa stocks (worryingly low by the end of last week) were restored to sigh-of-relief heaving levels once more. Twenty hours of drip-by-drip distillation and forty litres of wine later, and the pantry shelves are once more gleaming with ten litres of newly distilled firewater, and all is well with the World.

The first picture shows the setup, where the thing that looks like a cross between a Dalek and a Teletubby is in fact the evaporation chamber, and the other thing which appears to be attached to it by a copper umbilical cord is the distillation coil. Out of the picture are lengths of garden hose which attach the Still to a water tap, which ensures a 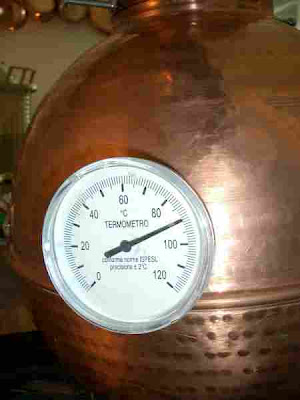 constant through-put of cold water into the distillation coil, thus causing the vapour to cool down and emerge into the bottle positioned below.

Relatively simple process. The main thing to remember is to keep the temperature of the chamber as near as possible to 90 degrees C. Below about 78 degrees, you produce methanol, which in turn will likely produce blindness - thus not to be advised - and above 100 degrees will produce something merely undrinkable (although it can be tipped back into the Teletubby and can go through the process again, if you want to have a go at producing a better result). 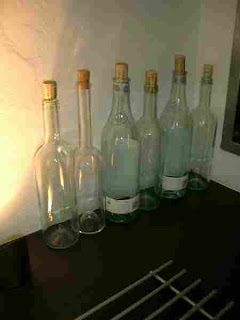 Surprisingly for this house, the main challenge on this occasion was finding enough empty bottles into which to pour the finished result - not, I hasten to add, because we've all turned teetotal, but because the bin full of use 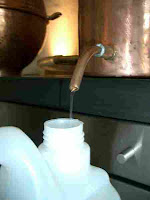 d bottles had thoughtlessly been recently emptied into the nearest bottlebank! After much scrabbling around , and even the judicious emptying (over lunch) of a couple of bottles of Pinot Grigio, we got there, and the drip was never without a home to go to.......

This time, hygrometer measurements indicated that the first few litres were rather stronger than desirable (coming in at around 57% alcohol) and the final few were rather weaker than desirable, so for the first time we adopted the expedient of chucking all of it into a large plastic jerry-can, and sloshing it all around together. The blended result, at exactly 50% alcohol, was absolutely on the money.

Polpettone of Tuna and Spinach.

Arista (a rolled Pork loin, roast with Rosemary and Garlic), served with Carrots cooked in Marsala.

Frozen Hazelnut Zabaglione, with Wild Strawberries. (NB. Since the fat content of Italian Cream is so low and the water content so high, when making this dessert in Italy, I have adopted the expedient of churning it in an ice cream machine before putting it in a mould to freeze properly. This avoids the danger that the mixture will separate as it freezes, and you end up with an unpleasant layer of watery ice at the base of the mould.)
Posted by Pomiane at 16:27