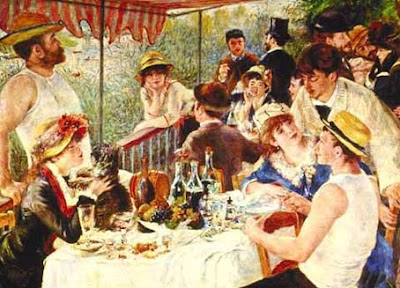 Pomiane's philosophy was very straightforward: a quality of life, significantly enhanced by the relaxed enjoyment of good food and drink, preferably consumed in the company of good friends. He disliked formality, pomposity or pretension. Pleasure should be simple - and the route to finding it should be equally uncomplicated.

This philosophy can be distilled into a number of distinct rules for the Cook. As follows:

And lastly, bear in mind that food doesn't have to be complicated in order to be good. For that reason, I've given one of my favourite Pomiane recipes below: Scrambled Eggs with Smoked Salmon. Simple and delicious, it encapsulates everything Pomiane stood for, and works equally as well as the first course for a grand lunch on Christmas Day as it does as comfort food beside the fire on a dreary day in February. Enjoy!

Tonight's Menu is..........the responsibility of the Bandierine restaurant. I'm having an evening off!
Posted by Pomiane at 16:16