I have a low boredom threshold and a poor attention span. I dislike fiddly and repetitive tasks, and one of the more mundane and tedious chores in the kitchen that has always been a black-spot for me is grating cheese. The old-fashioned way is both boring and slow, and because of these facts is additionally dangerous, since I stop concentrating and have a tendency to carry on grating until the tips of my fingers have also been incorporated into the process. Since I additionally have a low pain threshold, the discovery of the Microplane was a revelation. The manuf

acturers claim a revolutionary method of producing the blades that makes the cutting edges of the grater significantly sharper than all other graters - I have no idea whether or not the claim is true, but I do know that the chore has suddenly gone from the task, as it gets completed so incredibly quickly!
I first came across the product in Filenes on, I think, Avenue of the Americas in Manhattan (I might have got the street wrong, but it was definitely somewhere around there). By the time I realised what a wonderful discovery it was, I was looking for a second one (for the italian kitchen) at GTC in Sloane Square, and discovered I was in second mortgage territory. No matter - the next time friends were in NY, they had strict instructions to bring one back......which they did, along with two more longer and narrower versions (which are better for harder cheese such as parmesan, and for zesting citrus fruit) They also supplied themselves with more of the same for their own kitchens, having heard from me how wonderful these things are....and they too have been converted. 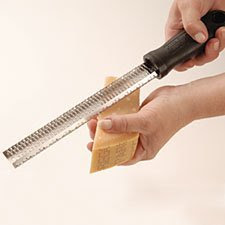 For zesting citrus fruit, the long, narrow-bladed Microplane is incomparable. It removes the top skin that contains all the oil and flavour, and leaves behind the bitter white pith. And it does it in a matter of seconds for a large orange or lemon, or a decent sized lime. This means no longer having to blanch zest in order to remove the bitterness, and producing in seconds a wave of tiny little citrus flakes that can be incorporated directly into whatever your recipe might be.

I think Microplane products are reasonably widely available these days, but since Microplane has its own website, then tracking down a stockist shouldn't be too difficult.

Roast Pork Loin, with a poultice of butter, Thyme and Dijon Mustard. Served with Ratatouille.

Fresh Strawberries with Almond Cream, garnished with toasted Almonds.
Posted by Pomiane at 17:59