And the menu was: 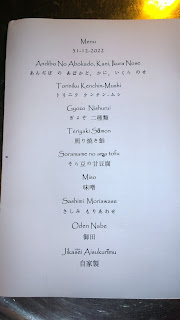 Aperitif was sake on-the-rocks, with a stick of fresh cucumber, served with crunchy, deep-fried fave beans.

To confuse matters, two swedish wines were served with the first seven courses (the swedes make wine? Who knew?) Immalan 2020, followed by Aniara Renessans 2020. And then, because the Pauli had brought a splendid 2003 Barolo, we abandoned the warmed sake we'd intended to go with the Oden Stew, and defaulted instead to Italian vintage. For dessert, I'd lost my nerve anyway (I don't actually like Japanese desserts - to my mind, the mouth-feel tends to the 'woolly', and flavour ranges are too chestnuty for my liking...) and so, we had ginger ice-cream, which was light and rich and creamy, with just enough bite.

I'd worried that we might not last until midnight, but in fact we were still ploughing through Oden Nabe (stew, in other words, of  beef, chicken, potato, fried fish balls of shrimp and merluzzo, fried tofu, salsify - because I couldn't source any Konnyaku, and salsify seemed a good substitute - and hard-boiled eggs, all cooked in a complicated broth) when the fireworks began to explode in the distance. This four-footed, unlike her two predecessors, was spooked by the noise, and she ran around being alarmed for a good five minutes, until she was corralled again, under the table. And we could then wind down into the final course, and try not to worry too much about what 2023 might bring!

Da capo. The fridge is stuffed with leftovers, and we'll be dining 'alla Nonna' for at least several days to come.