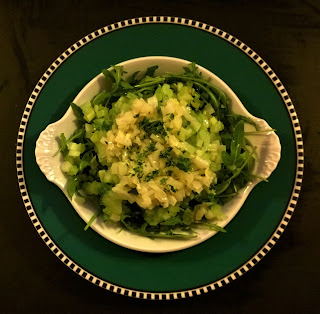 After a period in which the word 'salad' could be associated with any collection of dispirited green leaves, occasionally enlivened by the amusing addition of strange bedfellows such as peanuts or diced pineapple, the dish is once again coming into its own. Helped in part by the ready availability of interesting oils and vinegars to give added depth: caprese salad, with the complicated sweetness of balsamic vinegar , for example, or a classic bean and tuna salad, but with the addition of sherry vinegar rather than a bog standard white wine variety.

This celery salad I found in a collection of recipes by Carluccio. It is surprising, in that it reminds me of no other salad treatment that I know, and there's something about the dish which feels ancient. Carluccio talked about being served this salad as a child, in Calabria, just after the War, and neither the period nor the location suggests dilettante self-indulgence. Rather, one gets the feeling that this is a dish which has been being consumed by peasants over the ages, all the way back to Roman times. Having tried it once, it firmly entered my repertoire.

In cooking both the celery and the onion, it is important to remember that the vegetables are merely being softened, and not cooked to a mush; they want to go beyond being al dente, but still to have some structure to them. I served the salad here on a bed of rocket leaves, which had been dressed in walnut oil and bergamot juice - but that was just because I had all of that to-hand, and those are entirely optional elements. The real hit in the dish comes from the sweet edginess of the vinegar which has penetrated into the softened flesh of the diced onion.

1. Finely dice the celery, and blanch it for two minutes in a large pan of boiling, salted water. Drain into a colander, and leave to cool.

2. Heat the oil in a small  pan, and in it gently cook the finely diced onion. Do not let it colour, or to become crisp. Once the onion is soft, turn off the heat, lightly salt the onion and stir in the vinegar, which the onion will absorb as it cools.

3. Taste the cooled celery and add salt, if needed - it probably won't. Divide it between two salad plates, on the bed of dressed salad leaves, and scatter the onion, still warm, over the top of the celery. Sprinkle some chopped parsley on top of that, and serve.