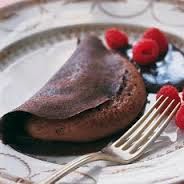 The recipe - or rather, the version I've always used, as I think it can be found in quite a number of books, these days -  comes from Michel Roux, with the sauce imported from a Fredy Girardet recipe where he uses it to coat a construction of vanilla ice cream encased in a warm crêpe, which is then passed under the salamander. I remember being deeply nervous the first time I made this souffle crêpe recipe, with the misplaced fear that the whole thing was extremely fragile and delicate and that it therefore  risked falling to pieces when being transferred from baking tray to serving plate. In fact, it's perfectly robust, and requires no more complicated treatment than to be scooped up with a fish slice and plated, quite unceremoniously, on a decently warmed plate, before the sauce is poured next to it.

The first three steps of the recipe can be done in advance, but thereafter you need to do the remaining steps just before serving - the oven stage is quick, and it might take only around five to six minutes from starting to assemble the crêpes and souffle mixture to actually serving the completed dessert.

Method:
1. For the crêpes, liquidize all ingredients together; using the standard technique, use this mixture to make six crepes, and set to one side. Once cool, use a sharp knife and a cake ring (or any other appropriate sized circular form) to cut from the centre of each crêpe a perfect circle of about 6" diameter. Leave these on a plate covered with clingfilm until needed.
2. If the creme patissière is cold, reheat it gently in a double boiler, and stir in the cocoa powder.
3.  Put the sauce ingredients in a small saucepan, and simmer for five minutes or so, until thickened and slightly reduced.

4. Whisk the egg whites until half-risen, then add the sugar by spoonfuls as you continue whisking until the egg white makes soft peaks. Stir a third of the beaten whites into the crème patissière, and then fold in the remainder.
5. On each of 2 greased baking trays set out three of the crêpes. To the right of the centre of each one place a generous spoonful or two of souffle mixture - approx 3/4 cup of mixture per crêpe - and fold the 'empty' half over the mixture, to make a semi-circle.  When all six are ready, place them in the pre-heated oven.
6. Re-heat the sauce.
7. Watch through the oven door as the souffle mixture cooks and rises, and fills the crêpes as it does so. It should take about five minutes in total to cook - you'll have to judge by eye when they look done.
8. Take the trays from the oven, shake icing sugar over the top, and quickly transfer the crêpes to warmed plates to serve, with a generous spoonful of sauce poured alongside each one.