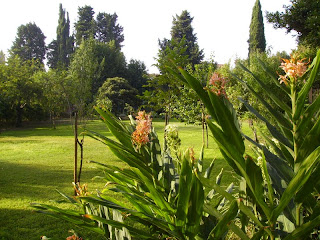 Hot. Very. I would say 'unbearably', since the temperatures are comparable with the heatwave we had this time last year, which sent us scuttling for refuge in London...but somehow the verdant lawns and generally flourishing  look of the garden seems to make the heat more acceptable. Which must be another benefit of the hundreds of gallons of water we're chucking around the place on a daily basis. The Technical Dept has been increasing the coverage of the irrigation system, little by little, and I think the only things in the entire garden now not automatically watered are the fruit cage, the camellias directly behind the church, and the disparate collection of shrubs which are down in the area of the white grape arbour (eucomus; wygelia; two lilacs; beauté vendomoise; a cunninghamia; and a chimonensis). Occasionally, one or other of us goes to check the level of the well, but it seems to be bearing this increased amount of use quite happily, and appears to refill at the same rate that the water is pumped out. Long may it continue! The garden here now has the sort of emerald sheen that would bring a twinkle to the eye of any self-respecting kerrygold cow, while the rest of Tuscany, as far as I can see, is burnt to a frazzle. The last time we had any rain to speak of was almost three months ago... 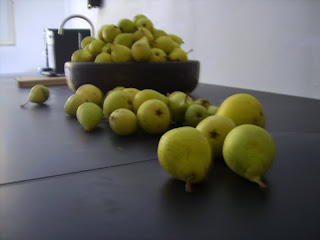 The worst of the fruit glut is over - and I confess that towards the end I just left the plums and greengages for the birds.Now we're harvesting almonds, hazelnuts, and apples; the figs are just starting to ripen, and the later- fruiting pears and peaches are coming on well. The fruit cage has settled down to a manageable quantity of strawberries and raspberries, which means I can generally find enough of either one of them a couple of times a week to make ice cream or sorbet or a tart for dessert, but no longer feel over-faced by the volume.
At the start of the week, when I went along to the fruit cage to pick strawberries for that evening's supper, I found an owl trapped in the netting; presumably it had been there since the night before and had managed to get itself thoroughly entangled in the process of trying to break free. By the time I found it, it was probably exhasted, and traumatised, and certainly didn't struggle when I cut it free and took it to the (relative) cool and gloom of the workshop, where I carefully cut away all the remaining bits of netting from its talons. No broken bones, which was a relief, and the bird just seemed in need of rest and recuperation.

When I went to check on it, after a couple of hours, I found it had pushed its way into a pile of bits of polystyrene (part of the TD's filing system of 'bits of stuff that might one day be useful for something'...) which was perhaps more reminiscent of home than was the fruit box I'd given it as a bed; another couple of hours later, and I found it perched on top of the polystyrene, and watching me unblinkingly as I collected some things I needed for the garden. I left the door open for it, and when I went back to check, early in the evening, it had gone. Job done. From its size, perhaps eight inches or so top-to-toe, I'd assumed it was a juvenile, but apparently there is a species of owl indigenous to Italy, called Athene Noctua, which would be miniature in comparison to the sort of owls we have in the UK, so perhaps it was one of those. From the pictures on the web, it certainly looks to be the same thing. Very pretty. TD thinks there may be a nest in the well-house, which I think we'd consider to be a Good Thing. 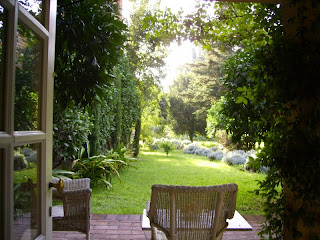 Tonight's Dinner:
Risotto of fresh peas and chives.
Cold poached Pork, with piccante sauce; Fennel Salad.
Grandmarnier Cheesecake (Charles passed through a couple of days ago,  on his way back north from Pisciotta, and dropped off some Mozzarella and Ricotta enroute; the ricotta will go into the cheesecake...light, creamy and delicious!)
Posted by Pomiane at 09:37

It's a pretty bird and I'm pleased that you were able to free it. It is called the Little Owl in the UK, introduced here in the 1800s.

Your fruit glut must be quite a conundrum for you.