How to make the perfect soufflé 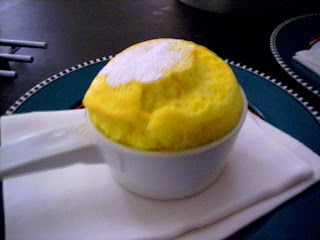 Soufflés were one of the (relatively) first things I learned to make - after pastry, and crème patissière, I think. And certainly, I can remember about thirty years ago happily churning them out without a moment's thought, and often, when we were entertaining in the kitchen at Bankside, getting up from table mid-supper and getting on with soufflé production, without missing a beat in the general conversation. As with much else in those days, I learned from the late great Julia, in Mastering the Art...and, as with everything else that came from her instruction, the technique worked perfectly. (I've never been entirely clear how much that was Julia, and how much was Simone Beck, but at the end of the day, who cares?).
And then, over time, somehow I lost the knack. I'm not quite sure when...but I suppose I got hi-jacked by other people's methods and recipes (different temperatures, different base recipes, whether or not to use a bain marie, different ways of recognising the correct consistency of the mixture, different - but confident - opinions about everything...), and at a certain point I recognised that soufflés had become, for me, rather hit-and-miss. Which meant that I produced them less often, which meant that when I did they became even more hit and miss. Which was deeply frustrating, and basically kind of stupid....since I knew I used to be able to do it with my eyes shut. The final straw was the Larousse Book of Soufflés, which was one of the things under the tree for me this Christmas. Packed with wonderful-sounding things....except that when I tried the first of them, somehow instinctively I knew it didn't feel right, and when the end-result rose too high and then toppled over messily inside the oven, it was clearly time to take action. Following the time-honoured dictum that 'When all else fails, read the instructions', I decided to do just that, and crack open Julia once more.Which I did. January was significantly - and remarkably successfully - devoted to re-learning soufflés, and by the end of the period I felt as though I'd emerged from a bout of rehab, and all was once more well with the world.
The following method is for sweet soufflé (the method for savoury is different, and I'll post on that some other time), and is a basic recipe for Vanilla Soufflé, with variations thereafter for a number of different alternatives.
For two individual soufflés, in circular moulds 9cm diameter x 4 cm depth.
Ingredients: 11g plain Flour; 70 ml Milk (2.5 fl oz, if you're working in imperial - I switch between the two, all the time); 28g Sugar, plus 1 spoonful; 2 medium Eggs + one extra egg-white (if adding the extra white from whites you'e saved otherwise, and therefore need to measure a quantity, then one egg-white is approximately 30 ml); 1 tablespoon Vanilla Essence; a pinch of Salt; Icing Sugar.
Method:
1. Heat the oven to 200 degrees C.
2. Grease the inside of your two soufflé moulds.
3. Into a bain marie over medium heat, place the Flour, and add a couple of tablespoons  of the milk, to allow you to make a lump-free paste. Once the Flour has been properly incorporated, add the rest of the Milk, and mix together thoroughly with a hand whisk. Add the 28g of  Sugar, and cook for a few minutes, stirring from time to time, until the mixture has cooked and thickened.
4. Remove the mixture from the heat, and beat in the egg yolks, one at a time. Allow the mixtrure to cool slightly, then mix in the Vanilla Essence.
5. In separate bowl, whisk the egg whites with a pinch of Salt, and when the whites start to stiffen, sprinkle a spoonful of sugar over hte surface; continue beating until the whites are stiff.
6. Mix a quarter of the stiff whites into the base mixture, then carefully fold in the remainder.

7. Fill the prepared moulds above the rim, and then run the side of a palette knife across the top of the mould, to scrape away excess mixture and to fill the moulds perfectly.

8. Run your thumb right round the edge of each mould, to create a small channel round the surface of each soufflé - this will stop the mixture from sticking to the mould, and allows the sides to rise vertically. Using a template (a piece of card or papaer, from which you've cut a circle about a cm in diamater less than the top of the soufflé) sprinkle icing sugar over the top of the mixture, to make a crisp skin on the surface of the finished product.
9. Place the soufflés in the oven, and as soon as you've closed the door, reduce the tempertaure setting to 180 degrees C.
10. Bake for eleven minutes. (This may take slight experimentation in practice, as no two ovens are identical, and ten seconds more or less can make all the difference with the finished consistency - you might find with your own oven that the best result is given by 10 and a half minutes, or by eleven and a quarter; for me, it's eleven.)
Serve. Immediately. And with pride. Best to put each soufflé dish on top of a folded napkin on each plate, as this stops the dishes from skidding around as the plates are taken to table.
The variations: For Coffee Soufflé, replace half of the Vanilla Essence with two teaspoons of Coffee Essence,  or better still, mocha paste;  for Praline soufflé, replace half of the Vanilla with two tsp of Praline Paste; for Orange soufflé, replace half of the Vanilla with the finely grated rind of one orange, plus 2 tbs of cointreau; for Almond soufflé, add to the Vanilla mixture a quarter tsp of almond extract, plus 90g of toasted ground almonds (you might need an extra egg white in this version, as the base mixture is thicker than with the other recipes, and so needs more beaten egg-white to lighten it.) 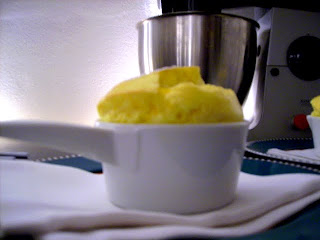