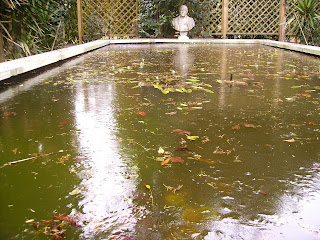 The lily-pond has been a sheet of ice for the past three days, although we haven't been having noticeable frosts - so I suppose the temperature must be all to do with the famous 'windchill factor'. It's enough for even the junior four-footed (who's choice normally would be to live outdoors, if he could) to come back inside, after only about three minutes' commmuning with nature - while his senior compadre merely peers doubtfully at 'outside', before politely looking up to indicate that No, he doesn't really think so, thank you.
I agree, and gardening has been put on hold for the time being. The locals, whipped by the media into a frenzy of concern, have been wrapping plants and shrubs in fleecy shrouds...and although I pondered doing it for some of the more tender plants, in the end I decided not to, since there were far more than I could wrap up that would be vulnerable if it got really cold (so, how to choose?)...and I wasn't entirely convinced about the threat, anyway. And in the end, I don't think it's been any colder than it normally is at this time of year, and already all those alarmingly low 'minus' figures have largely evaporated from the forecast - as I suspected they would - so it looks as though the panic should be over. The fleece-sellers will have done well from it, though!
The one thing we did decide to protect was the Madagascan Traveller's Palm in the courtyard - which isn't supposed to be this far north, at all - and the Technical Dept constructed an enormous bobble hat for it out of bubble wrap, inside which he rigged up a garden light , to keep the air slightly warm. And because the light is on 24/7, it washes upwards and casts a ghostly glow at night over the facade of the church behind, and catches the sculptural lines of the gothic windows. Rather splendid and mysterious... 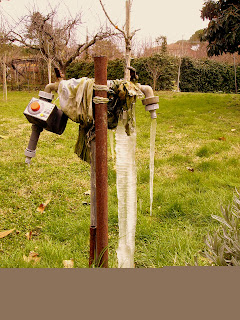 Bah, we used to DREAM of living in a shoebox! Here in Vilnius we've had several days below -20C, so our dinner was a hearty coq au vin with more or less robuchonesque mashed potatoes (wife intervened before I proceeded unpacking a second 200g pack of butter), preceded by some head cheese with pickled beetroot and homemade mayo.

Sounds as though you have little to complain about...(apart from the small matter of the temperature). The potatoes sound wonderful!

One cheerful staff member at L'attelier Joel Robuchon in London overheard me telling my friend how the secret to the mashed potatoes he just licked clean was almost 50% of it being butter, and said "the REAL secret is there are no potatoes."

All this talk of food is making me hungry! I raise my glass of prosecco to you, and head off to the kitchen...(I hope I have enough butter in the fridge!)

I need a fernet branca now, and salute you back!

We have had a week of severe frosts and last night had roughly 10 cms of snow. Much to my disgust as I have an appointment tomorrow and my car is too light to drive in the snow, which means two taxi fares.